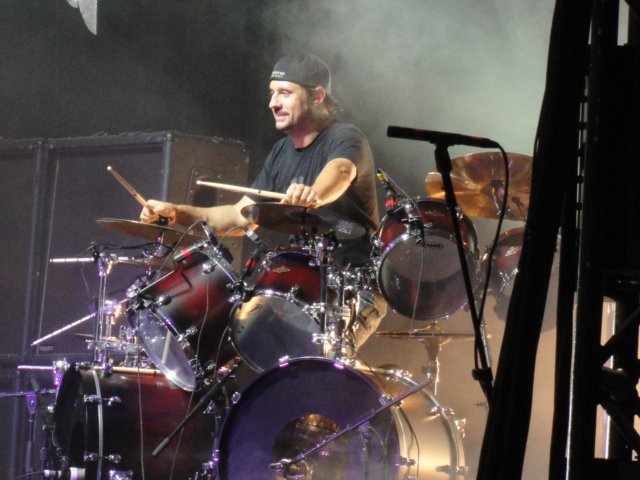 About 8 hours ago Dave Lombardo, co-founder of Slayer and the band’s drummer for more than 30 years, released a statement in which he states that Kerry King has kicked him off the band’s upcoming Australian tour in reaction to complaints from Lombardo about not being paid for the band’s touring in 2012 and about being denied access to the band’s financial records.

In his statement, Lombardo claims that 90% of Slayer’s 2012 tour income was deducted as expenses, including the professional fees paid to Slayer’s management, “costing the band millions of dollars and leaving 10% or less to split amongst the four of us.” Lombardo states that he and Slayer frontman Tom Araya hired auditors in an effort to find out what had happened to all of the tour income but they were denied access to the detailed information they sought to obtain.

He further states that management demanded, as a condition to paying him, that he sign a contract “which forbade me to do interviews or make statements having to do with the band, in effect a gagging order.”

This all sounds pretty serious — the kind of serious that could lead to a lawsuit as well as Lombardo’s permanent split from the band. The statement also implies that Tom Araya is equally troubled by the handling of Slayer’s 2012 tour income.

Could this be the first step in the disintegration of Slayer — or at least a change that will leave Kerry King as Slayer’s sole surviving original member (guitarist Jeff Hanneman has been sidelined indefinitely after contracting necrotizing fasciitis)?

I must be honest and say that I don’t care much about the answer to that question. Without denigrating in the least the critical historical role Slayer played in the development of metal, or the greatness of many of their albums, I’ve lost interest in their recent musical output as compared to the work of hundreds of other bands, new and old.

But that’s just me. I know that Slayer still have a huge and committed following throughout metal, and for them, this really has to be disturbing news, because, honestly, who is going to patronize a Slayer band that is missing Dave Lombardo and Jeff Hanneman?

Much more will follow, no doubt. For example, I’m sure we will soon see an official reply from Kerry King.

There’s no word yet about who will replace Lombardo on the Australian tour, which is set to begin on February 26. Here’s the entire statement:

I want to personally apologize to all of our fans in Australia who have bought tickets for the tour expecting to see me in my usual place on the drums.

So that you all know the truth, as of the end of the business day on February 14th, I was notified that I would not be drumming for the tour in Australia. I’m saddened, and to be honest I am shocked by the situation.

Last year, I discovered 90% of Slayer’s tour income was being deducted as expenses including the professional fees paid to management, costing the band millions of dollars and leaving 10% or less to split amongst the four of us. In my opinion, this is not the way a band’s business should operate. I tried rectifying it by letting my band mates know, and Tom and I hired auditors to figure out what happened, but I was denied access to detailed information and the necessary back up documents.

I spent the Christmas and New Year holidays realizing I had toured all over the world in 2012, but yet, had not been paid (except a small advance) or provided a proper accounting for a full year’s sweat and blood. On top of this, I was told that I would not be paid until I signed a long form contract which gave me no written assurance of how much or on what basis management would deduct commissions, nor did it provide me access to the financial budgets or records for review. It also forbade me to do interviews or make statements having to do with the band, in effect a gagging order.

Last Monday, I sat down with Kerry and Tom to rehearse for Australia and to propose a new business model that I felt was the best way forward for Slayer to confidently protect itself so we could do what we do best . . . play for the fans. Kerry made it clear he wasn’t interested in making changes and said if I wanted to argue the point, he would find another drummer. On Thursday, I arrived at rehearsals at 1 pm as scheduled, but Kerry did not show. Rather, at 6:24 pm I received an email from the lawyers saying I was being replaced for the Australian dates.

I remain hopeful that we can resolve our issues. But once again, I sincerely apologize to all of our fans in Australia who spent their money expecting to see the 3 of us original Slayer members.
I look forward to seeing you in the future.

14 Responses to “THE DISINTEGRATION OF SLAYER?”