Feared are a badass band, a band with a sound all their own, a band who will curb stomp the shit out of you repeatedly until you beg for mercy.  Their unusual combination of melodic death metal charged with trademark Swedish excellence and ballsy incorporation of groove metal creates a sound that’s refreshing.  Even though Furor Incarnatus is the band’s fourth record, it’s the first time I’ve heard them, and I suspect it may be a first for many of you, too.

For this album, Feared are a three-piece, consisting of Ola handling the guitar and bass duties, vocalist Mario Santos Ramos, and percussionist / carnage-bringer Kevin Talley.  As you would expect, the drum performance is powerful, and Ola’s synthesis of Swedish melody, brutality, and American groove really pays off.  His riffs have a high infectiousness factor, but also retain quite a bit of depth in their composition and in the layering of guitar parts.  Mario as a vocalist is also a force, bringing to mind a lower-pitched and harsher Randy Blythe back in LOG’s Burn the Priest days.

The opener “Live In You” hits you distinctly. From a brief Opeth-ian acoustic intro it unfolds with an intro riff that attacks with a traditional At The Gates feel but is then countered by harsh, almost black metal-ish riffing with agonized, dissonant, yet melodic chords coming at you.  I really love the chorus of this song as well; it defines epic.

“Breathing Failure” is a song we’ve posted about already, but I still feel the need to say more.  Despite the fact that it opens with a melodic march reminiscent of Hypocrisy, the meat of the song is a Southern swagger-filled riff that feels like a steel-toed boot stomping your skull over and over.  The song also includes a wonderful solo by Per Nilsson (Scar Symmetry, Kaipa, The Absence) — but since when does Per ever do a solo that isn’t killer? It really fits in with the song well, providing a melodic break from what is otherwise a track that has a lot of balls and heft. 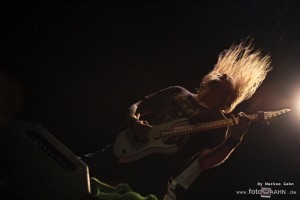 “Psycho Logic” is another standout groover, but it’s more oriented around an industrial, almost Fear Factory kind of style.  The music is cold and mechanical, yet it steamrolls nonetheless.

Furor Incarnatus is just really fucking good at what it does.  It’s heavy, it’s diverse, it’s got slow parts, fast parts, groovy parts, epic parts, chaotic parts – it includes everything that a truly dynamic metal album would need to capture the attention of a broad swath of listeners.

Only one song includes clean singing, but it isn’t pussy-ass pop-metal bullshit. It’s clean but still comes off rather harshly (Mario reminds me of Peter Tägtgren when he does this), and the vocals fit the song – which is called “Satan”, and it’s a balls to the wall thrasher.

I should note that the mix on this album is also fucking killer, done by Englund himself. It’s very meaty, with a lot of articulation to the particular instruments.  Ola Englund’s guitar tone is also very appealing, with a beefy yet glassy quality.

2013 is already proving to be a year filled with metal riches. Here’s to another 2013 top album contender – Furor Incarnatus.

Ola was kind enough to give us the privilege of streaming this beast for ONE WEEK.  So get your fill below, and BUY THE ALBUM. These guys really deserve the money and the attention.

EDITOR’S NOTE: Furor Incarnatus is out today on iTunes. At this location it can also be ordered as a digipak CD or as a CD + DVD bundle that includes other goodies. Social media links are below, and then you’ll find the album stream — for one week only.

UPDATE: The album is now streaming in full on YouTube, and we’re substituting that stream now that our week of “exclusivity” is up: