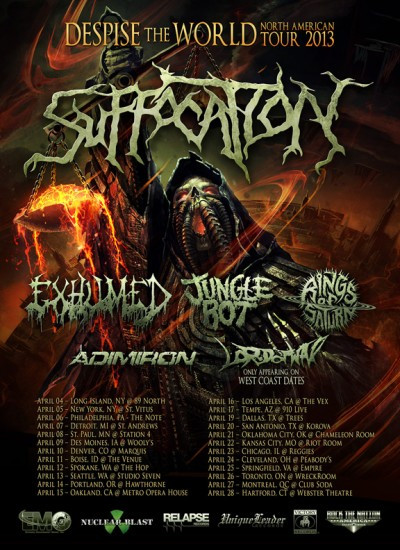 It seems like every other day the past few weeks is we’ve been writing about Suffocation. We reviewed their new album Pinnacle of Bedlam, we published an interview with Derek Boyer, we posted their new official video for “As Grace Descends”, and now we have details about their first North American tour in support of the new album.

Honestly, if Suffocation were touring by themselves or with support from their postman, I’d roll out for it in a heartbeat — this band is one of the best live acts I’ve ever seen. But this tour includes a bunch of other strong attractions: Exhumed, Jungle Rot, and Rings of Saturn — plus two other bands I have a feeling I need to learn more about: Adimiron and (for West Coast dates) Lord of War.

Though it’s called a North American tour, Montreal and Toronto are the only Canadian stops and the Deep South and Mid-Atlantic regions are getting passed over, but for those of you who aren’t within driving distance of this monster you’ll feel much better when I tell you that I will be able to go.

*with Lord of War