(In this post, NCS writer Andy Synn reviews the forthcoming release by Rotting Christ, their 11th album since 1993.)

True to thine own spirit – such has always been the mantra of Rotting Christ. And Kata Ton Daimona Eaytoy certainly holds true to this. While it continues the martial atmosphere established on Theogonia and Aealo, there’s actually less of a traditional folk-ish vibe to the music, and a much greater feeling of occult darkness (“Grandus Spriritus Diavolus”).

The distinctly Hellenic melody patterns still underpin the twisting, serpentine guitar lines (“In Yumen–Xibalba”), but the album feels less in thrall to history and tradition, and more concerned with underlining the foundations of the “modern” Rotting Christ sound.

That’s not to say that the album is in any way a “stripped down” or “back to basics” release – as it still litters the musical battlefield with strange apocryphal signs and mystical elements (“Ahura Mazdā-Aŋra Mainiuu”), ritualistic murmurings and reverberant war-like chants echoing across the blood-soaked field – but it is, to my mind at least, a heavier and more aggressive album altogether, and one that wraps itself in a more black metal aesthetic than we have seen from the band in some time, recalling the bands Non Serviam years, but with added extremity and muscle (“Gilgameš”). 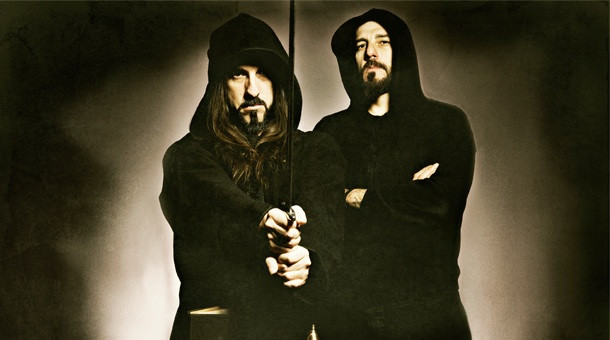 The drums of in particular have a berserker fury to them, one that definitely ups the intensity from the stomping, unstoppable pace of Aealo, the band moving from a grinding, conquering march to a blazing full-speed charge (“Κατά τον Δαίμονα Ἐαυτοὗ” – Kata Ton Daimona Eaftou) as stunning blasts and thunderous kick-patterns prepare the way for the band’s signature tapestry of crushing guitars and unusual Attic instrumentation.

There’s also an array of more impressive and intricate guitar-work on display, exposing a renewed focus on the more aggressive, black metal substructure of their sound, with its roots in choppy, stabbing riffs and strangled, serpentine tremolo lines. There’s also some particularly impressive lead guitar work going on (“Русалка” – Rusalka) which showcases the band moving beyond the self-imposed restrictions of traditional Grecian folk-melodies.

So while all the elements established on Theogonia and Aealo are still in place, they seem to have had their positions, and their prominence, shuffled around somewhat. This is an album built more on a foundation of black metal guitars and thunderous drums, classic weapons sharpened and polished to a gleaming, lethal point, and armoured in the strength and spirit of its ancestral culture. It feels more current, more modern… it’s less of a tribute to ages past than it is a statement of where the band are in the now.

That’s not to say the album doesn’t have its share of more esoteric moments, particularly the gloomy piano and pained female vocals that crown the first half of “Cine iubeşte şi lasă”, the thudding beats and almost dance-able rhythms of “Iwa Voodoo”, and the ominous, gothic vibe of doom-laden closer “Χ ξ ς” (666).

But overall the heaviness and the drive of the album are its overwhelming and dominant characteristics, the chain-linked guitars and steely drumming proving an utterly indomitable wall of sound. 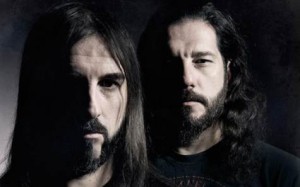 A rejection of gods, of myths, of blind beliefs – that’s what the band stands for, what it has always stood for, and what it will continue to uphold for years to come. At this point in the band’s career, reflecting on their lasting legacy, we can see that “Do what thou wilt” means something special and specific to the band.

It means freedom – to create their own artistic identity, to reject any limitations except those which they choose to create, to work only within the boundaries they choose to accept, and to follow only the path they define for themselves.

EDITOR’S NOTE: ΚΑΤΑ ΤΟΝ ΔΑΙΜΟΝΑ ΕΑΥΤΟΥ (‘Do What Thou Wilt’) is set for a North American release by Season of Mist on March 5.  It will be available as a CD, double gate-fold Lp (available in color), and a limited edition Digibox including a pendant in a velvet bag, a flag, and a Digipak CD with the bonus track “Welcome to Hel”.

Below is a player that will allow streaming of the entire album. And for those whose devices are challenged by this player, we’re also including streams of three individual songs that have premiered separately.