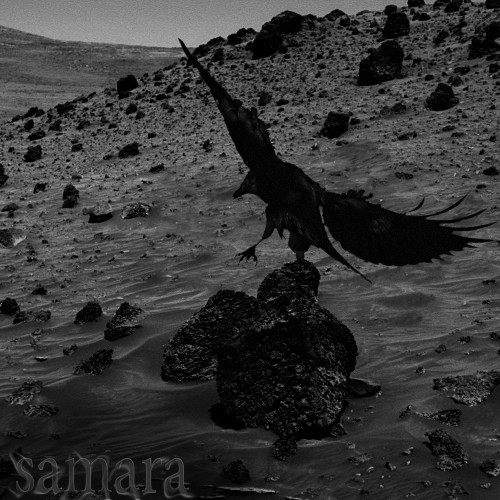 (In this post we have a guest review by NCS supporter and commenter Marious.)

Today I’d like to bring your attention to SamarA, an incredible band that I’ve had the privilege to gig and/or barbeque with several times. The band is a force to behold live as fog rolls in, images of nuclear explosion and natural disasters play on the back drop, audio samples loop, and the guitars slowly build up a palpable tension. By the time the first song actually begins and the piercing vocals cut in, chances are good that they have your full attention. I never get tired of seeing these guys.

So, when SamarA released their debut album last month I immediately bought it. The album begins with the bass-heavy, sample-laden track titled “I, Caligula”. It’s a bit of a slow start and without the visual aspect and droning feedback of a live set, the track lacks the gravitas that it would normally carry, but don’t let that discourage you. Remember, it’s all about the build up. You have to leave a little time for foreplay, and SamarA are masters of building that sort of intensity.

They aren’t teases though. Just when you can’t take it any more they dump in your lap a truck load of Slayer-tinged doom riffs and screaming vocals that could keep up with the most kvlt of Black Metallers. The album is an abridged tour through broken minds and ruined landscapes, clocking in at just over 28 minutes. I love it, but it leaves me wanting more.

SamarA’s self titled release can be streamed and/or downloaded for the incredibly reasonable fee of “name your price” from their Bandcamp page. Give it a listen and if you like it, consider dropping some coin for the download.