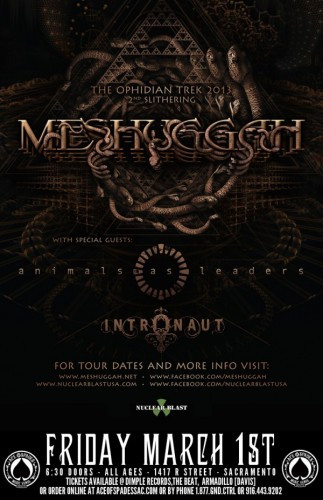 (DGR turns in this review of the live show by Meshuggah, Animals As Leaders, and Intronaut in Sacramento on March 1.)

This may be the third sold-out show that I have gotten the chance to attend at Ace Of Spades. That seems nuts considering that I have gone to a ton of concerts there since the venue opened up in downtown Sacramento – but that venue is huge. I admit that when I checked the site on the day of the show to make sure none of the bands had cancelled (a lesson that I learned after The Ocean had to flake out on the Job For A Cowboy/Between The Buried And Me show that hit there), seeing the SOLD OUT tab next to the show was exciting.

Seeing a band that you’ve never gotten the chance to see before is great, but seeing it with the hum and excitement of a ton of other people has such an effect on shows that it’s hard to describe. You often hear performers talk about how they will feed off of an excited crowd in front of them, but it seems there’s something about being in a packed venue that has that effect on the people watching as well.

I also still get a laugh out of seeing that giant swath of people standing in line across the street when the other side has a pool bar, then the venue, a burger restaurant, and then another bar – basically the type of place where a bunch of metalheads outside across the street seems weird.

This was also my second show there in two days, so I had plans to hide myself in the upper bar and just have a great view of the show. Therefore, my random yammerings about this specific show have to be taken from the perspective of someone who was eye level with the stage and about thirty feet back, with all of the pits and general crowd melange off to my right. 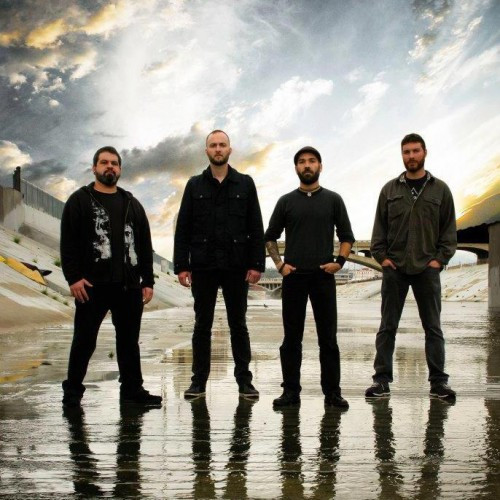 Intronaut took the stage first – a long time after the doors to the venue opened. They had five songs to play (including a couple off of the upcoming Habitual Levitations release) and given their exploratory tendency five songs can take plenty of time. They had smoke machines and a couple of laser lights but that was about it.

Intronaut have a sound that is a little difficult to describe and the immediate reaction is to lump them in with bands like Isis, Neurosis, and the bevy of bands who like to spend their songs buried in layers of bass with really repetitive sections to build mood. They have that beard-metal sensibility about what they do, but it isn’t entirely that. My friend (whose first experience with them was this show) described them as sounding like a slower hybrid of Scale The Summit and the grungier parts of The Ocean.

I had some experience with Valley of Smoke so I knew what I was in for and I was excited to see it. It seems like I’ve seen a lot of this specific type of flow at shows now – where you have the real moody and atmospheric opening band who like to take their time with music and then everyone else gets to add on to the momentum. However, there was something undeniable to it because I fell into their trance just as much as anyone else.

To be honest with you, I probably could’ve listened to the closing bit of “Australopithecus” until about eleven thirty that night because in that moment the whole venue was just filled with the sound of that bass guitar and drummer, and the hum of it all just felt good. It seemed extended out already from what you get on the album, but that may just have been the effect of time slowing down when you see stuff live – where an hour-long set can feel like an eternity –  but man, did it feel like that part was the best way to just close the set out. 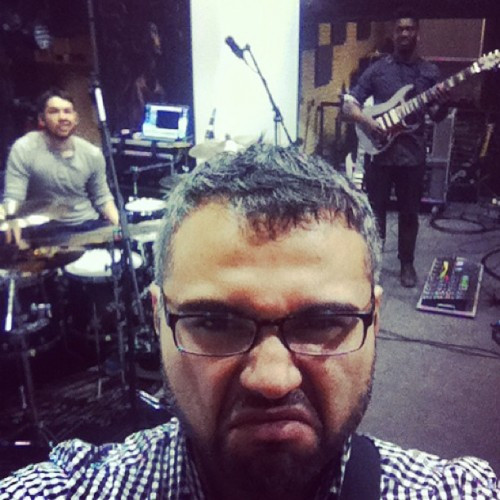 There was a moment halfway through Animals As Leaders’ set where group mastermind Tosin Abasi mentioned to the crowd that this show was their second time playing in Sacramento and he wanted to know who in the crowd caught them the first time with Darkest Hour and Light This City. Amongst the small bit of “yeahs” and hands shooting in the air (myself included) it occurred to me that, holy shit, this band has gotten big. It still seems crazy to think that a group whose work almost feels like music strictly for musicians has gained such a huge following.

The other venue where I saw these guys was admittedly packed, but not at the level of being a sold-out show in a venuewhere they could actually have two projectors to add a visual element to what they were doing on stage. Not only that, but it seemed like between these guys and Meshuggah they had an even draw of people who wanted to see them – which is nuts since they don’t follow what most people understand as being the formula for a band. Not only that, but they were just blowing the minds of folks who had no idea what they were seeing, including the one guy who was standing behind me screaming “GET THE FUCK OUT OF HERE” every four measures of a song.

I still find myself locked in on these guys whenever I see them and I can’t imagine I’m the only one who just wants to see them destroy those guitars with what they were doing. Not only that, but now they seem to be having such a good time with it (especially their drummer who was just going nuts) that it infected a lot of folks in the room.

I’ll admit that I haven’t listened to Weightless as much as I should, but a lot of that music still works from a sheer guitar-work perspective without me having any idea what the hell is going on. The songs that I was familiar with sounded great live – although I would love to see more musicians on stage instead of relying on backing tracks. The three they have up there are incredible, but even the tracks sound like stuff being pushed to the brink of skill, and I desperately want to watch someone do that stuff live – even if it’s a guy with a drum machine and laptop hiding behind a projector.

Animals As Leaders really are an exciting band to see live, especially when you can tell other people in the crowd have no idea what they’re in for.

Meshuggah sounded absolutely massive that night. While I may have been disappointed by some of the choices they made on Koloss, you can see the importance of a song like “I Am Colossus” and its crushing pace when you witness the songs live. They just sounded absolutely huge that night. When people describe Meshuggah as some sort of otherworldly force or gigantic beast they aren’t kidding. The guys aren’t exactly the most lively to watch on stage – instead taking after the dead trees method of standing there and watching their instruments – but the music that they play still comes off just as heavy.

It had been forever since Meshuggah had made any sort of appearance in Sacramento, so they had a completely willing crowd that was excited to be putty in their hands. I don’t understand why everyone would start trying to clap along in rhythm to each song but I also wasn’t on the floor; maybe there was a completely different mood there compared to the buzzing excitement and drunk folks that I had in the upper bar. There actually wasn’t much in the way of crowd banter either, which I was actually kind of excited about. It just seemed like they were playing song after song after song all night with very little time to stop whatsoever.

I figured this would be the case, but the songs off of Koloss sound way better live than they do on that disc – especially “Break Those Bones Whose Sinews Gave It Motion”. That slow chug that makes up the background rhythm absolutely destroys a venue in a live setting. The fact that it came directly after “Bleed” and “Shed” added to the sense of intensity to the song as well.

Since I had never seen them live before, basically every song they did felt like a revelation, and when you have a band with such a massive discography there’s bound to be some omissions. There was nothing off of Chaosphere – which was my only gripe (although not a huge one) and I haven’t paid any attention to what their sets have been like before, but they must be super excited not to be playing Rational Gaze anymore. Before this, my only reference to what a Meshuggah live show was like the Alien-styled DVD that they put out. As it stood, this night was Koloss- and Obzen-heavy, which I thought was great. They also did the back bit of Catch 33, which was pretty cool.

Overall, the set was enjoyable as hell – from the giant lighting rig the band had to every weird moment where I got to enjoy some poor dude in the crowd losing time with the song. I’m not stupid – I knew the floor was going to be violent as hell and I counted no less than five shoes go flying in the air, and at least two jackets wound up hanging from the rafters, but maybe next time. The band just completely overtakes you live and I will happily pony up if they ever find their way back to my town again.

3 Responses to “MESHUGGAH, ANIMALS AS LEADERS, INTRONAUT: LIVE IN SACRAMENTO, ON MARCH 1, 2013”