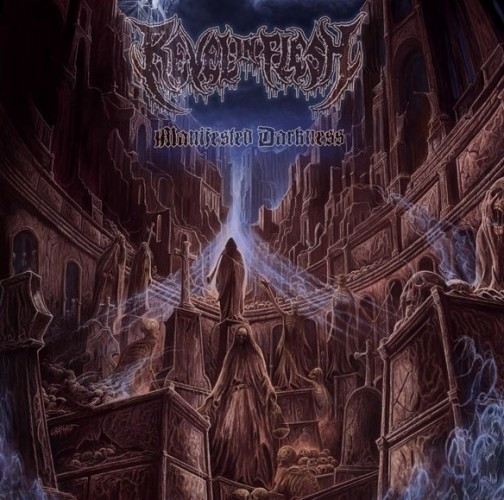 You would be forgiven if you thought the title of this post was a command from us to you or a statement of your humble editor’s “words to live by”. However, it is instead the name of a German death metal band whose members previously paid dues in bands such as Immortal Rites, Dawn of Dreams, and Apophis. Come April 12, FDA Rekotz will release the second album by Revel In Flesh, Manifested Darkness.

Two songs from the new album are now available for streaming, with the second one going up just yesterday. I was attracted to the music because I heard good things about the band’s debut album (Deathevokation), because I’m really enjoying the new album’s cover art (by Spanish artist Juanjo Castellano), because Manifested Darkness was mixed and mastered at Unisound Studio by Dan Swanö, and mainly because I’m just fuckin’ addicted to the style of metal to which Revel In Flesh pays homage.

And that style (mainly, though not exclusively) is the kind of Swedish death metal popularized by the likes of Nihilism, Entombed, Dismember, and Grave. Now if you’re the kind of listener who does an eye-roll when hearing about yet another band plumbing the well-plumbed depths of that genre, bear with me a few minutes longer.

The two songs from the album now up for consumption are “Revel In Flesh”, which is the subject of an official video, and “Dominate the Rotten”, which premiered yesterday at DeathMetal.org. Both songs do a very nice job of harnessing the Sunlight Studios guitar stench, mixing the blast beats and the d-beats, and generally exuding a fog of rotten, noxious, tremolo-driven atmospherics that smell an awful lot like the original putridity of the late 80s and early 90s.

The shit moves briskly, the music is built around some nasty hooks, and the vox are suitably bestial. You can feel the punk roots in the rhythms and the rumble of chainsaws in the music’s guts while the vibrating guitar leads go to work boring holes in your skull. You can check out the newest song via this link, and the video is right below:

The CD and digital download of Manifested Darkness will be released on April 12. An LP version is planned for April 26 and will include an additional bonus track. Pre-order here.

3 Responses to “REVEL IN FLESH”