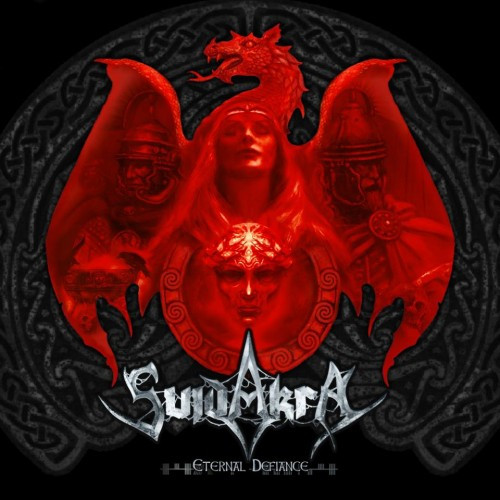 This morning brought new goodies from two of our favorite folk metal bands, who enjoy capital letters so much that they refuse to stop at just one: Norway’s TrollfesT and Germany’s SuidAkrA.

SuidAkrA will be releasing a new album via AFM Records on May 24. Its name is Eternal Defiance and it will include 10 tracks plus a bonus song (“Mrs McGrath”). This morning the band unveiled the album’s cover art by Kris Verwimp. It’s an eye-catcher, and one that makes me curious about the significance of the four faces superimposed on the red dragon. Time will tell . . . I’m hoping for good things from this album.

The world’s premier exponents of True Norwegian Balkan Metal also have something new on the way — a 12” picture vinyl entitled A Decade Of Drekkadence, which the band is releasing in celebration of their 10th Anniversary. The picture disc, created by Swedish cartoonist Jonas Darnell and designer Terje Johnsen, is also an eye-catcher, but in a different way — nutty instead of dramatic — but what did you expect from these guys? Here it is: 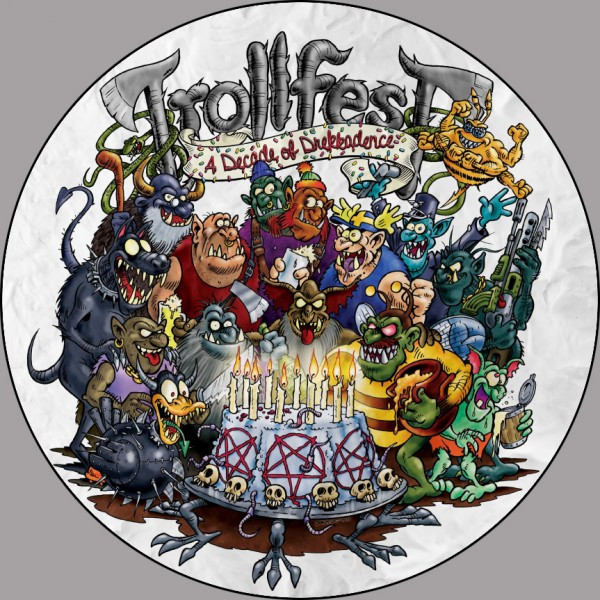 The 16 tracks on A Decade Of Drekkadence will include one new song, two b-sides, the band’s never-before-released 2004 demo, and three covers. And speaking of those covers, this morning TrollfesT premiered an official video for one of them — Britney Spears’ “Toxic”.

Now if you know TrollfesT, you know they were going to have some fun with Ms. Spears’ tune, and so they have. First, they’ve improved the song dramatically. Granted, that’s not saying much, given the quality of the original, but their version really is good. And second, the video is hilarious. You’ll see why in a moment.

Previously the band released another one of the covers on the new album, Tom Waits’ “God’s Away On Business”. This one was more of a challenge, because Tom Waits is awesome, but TrollfesT have still found a way to put their own stamp on the tune. I’ve included the YouTube stream for that one down below, too.

Advance orders for A Decade Of Drekkadence can be placed here: