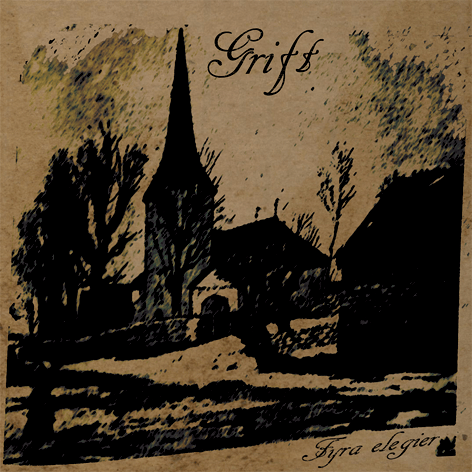 Grift are a two-man Swedish band formed in 2011 (consisting of Perditor on vocals and strings and J. Hallbäck on drums) whose music I just discovered yesterday. They’ve recorded a four-song debut EP, Fyra elegier, that’s scheduled for release on April 15 by the Nordvis label. And what I heard yesterday is a song from the EP named “Dödens dåd”.

The song begins with a mournful, folk-inspired violin solo set against the sound of falling rain . . . or maybe the hiss and crackle of an old platter of vinyl on the turntable . . . and then it rapidly transitions to a different kind of bleak atmosphere, one that unfolds to the muffled rumble of drums, the winding chords of tremolo guitar, and the anguished, scarring cries of Grift’s vocalist. Both stately and intense, the song reminds me of mid-stage Burzum, and its melancholy sounds have infected my head.

The EP can be pre-ordered here. Listen below.