Frontman S. didn’t let the fact that the band were opening the festival proper intimidate him, spitting necrosadistic venom at the crowd with his spiteful, belligerent snarl, while the aptly-named Carnage on bass was a stalking, twisting revelation of spindly fingers and malevolent contortions. Give these guys a longer set and a bigger stage someone! 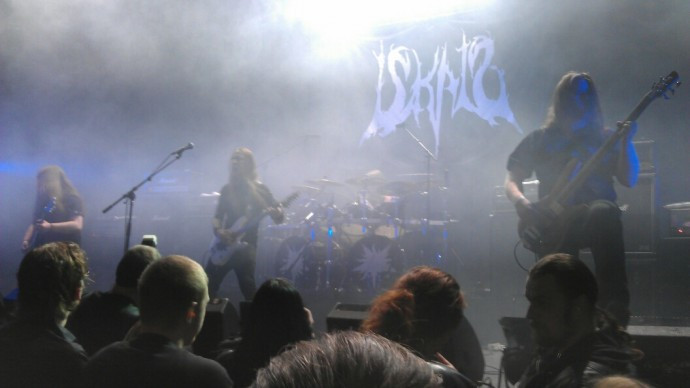 Up next was the icy, melodic black-thrash of Iskald, one of only two bands playing tonight whom I’d actually seen before. Undaunted by the large stage and booming amphitheatre before them, Iskald put on a hell of a show, technically stunning and extremely atmospheric. Scathing vocals, shape-shifting fretwork, and complex, proggy song structures defined the band’s chilling, melodic sound, swept along by blizzards of blast-beats and breakneck staccato shifts in tempo and tone.

Touches of early Enslaved, with a cold ambience and a scalpel-sharp guitar tone, helped the band weave an epic, icy spell over the audience, drawing liberally from all three of their albums. The morose, downcast ambience which infects their music didn’t dampen the crowd’s enthusiasm though, with the assembled fans (including yours truly) going appropriately apeshit for stunning tracks like “Pesten” and “Dommesdag”, as well as for an unexpected guest appearance by Normann Stjernen (Skaur) on a typically cutting new track that was aired tonight. 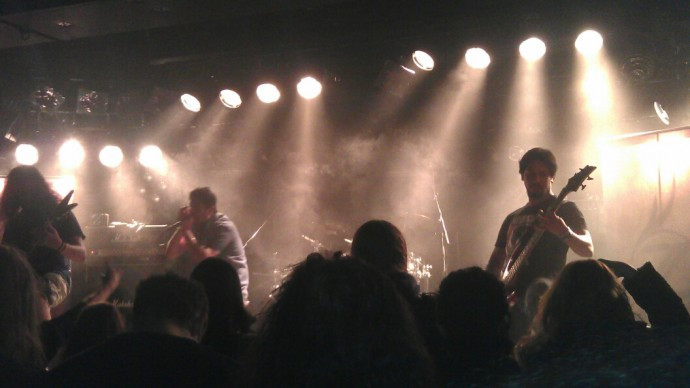 A complete unknown to me prior to this evening’s activities, India’s own Zygnema can best be described as what might happen if Decapitated took to covering Machine Head songs. Crunchy, angular, and heavy in all the right places, the group whipped up an impressively thrashy groove with songs like “Machine State Hibernation” and “Theory of Lies and Negation”, getting several small pits going and causing more than a few heads to bang in obvious appreciation. 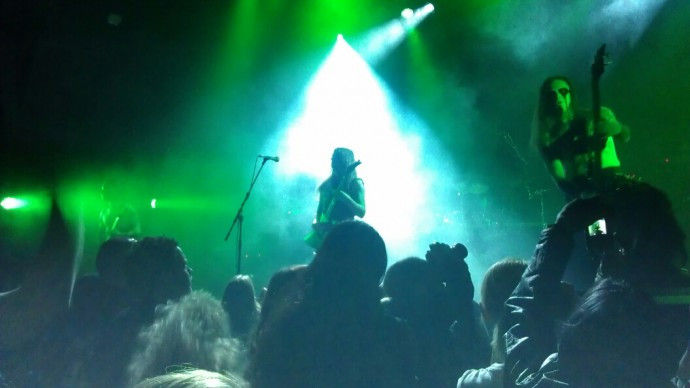 Back up on the main stage Polish death metal masters Hate had a surprisingly sluggish start to their set, not quite connecting with the audience with the sort of visceral, bone-shaking appeal you might expect. A slightly muddy sound certainly didn’t help, robbing their primal heft of the more incisive and clever hooks that usually permeate the band’s grim sonic visage.

Thankfully, the group are a bunch of seasoned professionals and soldiered on, tweaking their sound and performance bit by bit until, just about halfway through the set, they really hit their stride. New tracks like the epically doomy “Sadness Will Last Forever” let the band express their more introspective dark side, while the more mechanical assault of songs like “Erebos” and “Hex” rolled over the crowd like a steel-plated leviathan, regardless of the niggling sound problems plaguing the early part of the set. 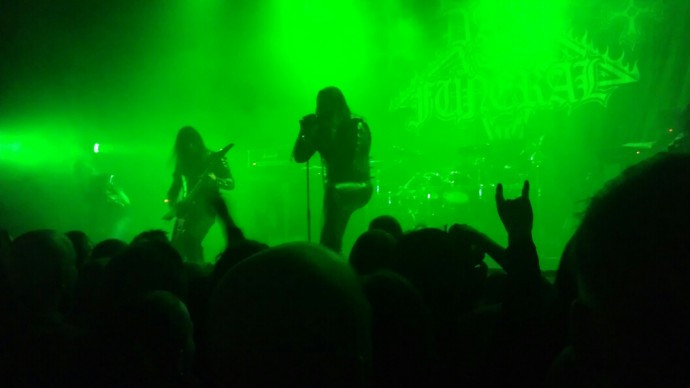 After a short break for merch/water/beer/coffee we returned to the main stage once again, to witness a rather special occasion. Tonight would be (to my knowledge) the last time Emperor Magus Caligula would be performing with Dark Funeral, returning to the fold one last time to perform a special one-off set for the loyal Inferno crowd. Absolutely on top form, his demonic lungs can still produce excoriating hellfire when called upon, and his armour-clad presence provides the band with a regal, commanding figurehead.

Though the band are perhaps starting to show their age a bit with their expanding figures (all, bar drummer Dominator, who remains a wiry force of devastation behind the kit), the three-headed attack of Lord Ahriman, Chaq Mol, and Zornheym remains one of black metal’s tightest guitar sections, buzzsawing their way through both older and more recent material with equal vigour. An eviscerating run-through of “Open The Gates” was dedicated to the recently deceased David “Blackmoon” Parland, paying honest and welcome tribute to his founding role in the band, before everything was brought to a close with a blitzkrieg rendition of “My Funeral”. 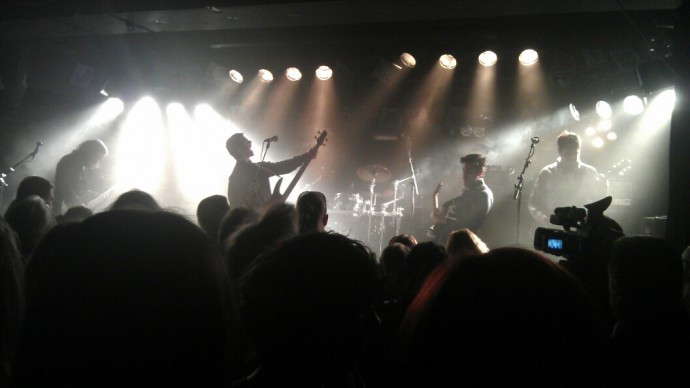 Downstairs in John Dee saw the ten-legged oddity that is Solstorm take the stage and proceed to drain the room of all life and colour with their crawling, doom-laden ambience and ear-splitting, claustrophobic waves of crushing guitar. And I mean all that in the best way possible.

Like an emotional vampire, the music of Solstorm feeds on despair, leaving you a depressed, hollow husk. Teasing strains of desolate melody flit in and out of the shadows as the band build and build toward a towering crescendo, squeezing every last drop of tension from the taut, knife-edge atmosphere they’ve created. The triple-guitar line-up is used to great effect, winding and intertwining competing melodies, harmonies, and dissonance to produce a squalling wall of almost physical sound. Probably the best band of the evening, I shit you not. 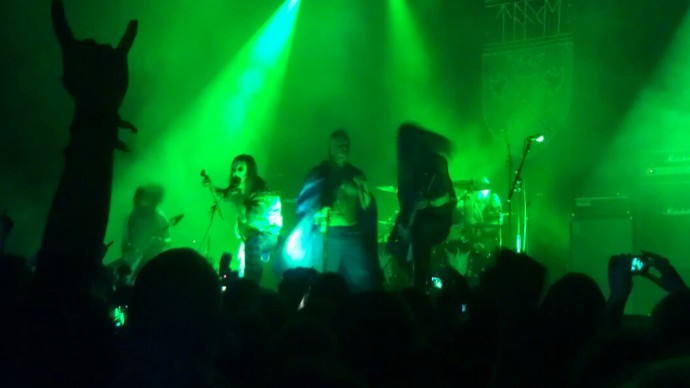 Now if Solstorm were the best band of the evening (clearly only my opinion, and arguable, of course) then the band on next in the main hall were only a hair’s breadth behind them. One look at the fervour on the faces of the assembled audience and you could tell that Taake are the beating heart of the black metal scene – proud of their scene, proud of their homeland, proud of their outsider status, yet clearly aware and appreciative of the devotion they inspire. Not only this, but Hoest is clearly well loved by his peers as well, as the band would have no less than four guest vocalists join them onstage over the course of the next hour.

As the band stepped onto the stage their frontman remained concealed behind a voluminous robe… now, the eagle-eyed punter may have noticed that this figure was perhaps a tad taller than Hoest himself usually appears, and I myself certainly guessed that this wasn’t Hoest at all, but arch-provocateur Niklas Kvaforth… mainly because I’d seen him hanging around at the opening party the night before, so it seemed pretty likely he’d be joining the band onstage for a run-through of “Nordbundet” (a version of which he guests on, on the newly released Taake anniversary album).

And indeed, as the song kicked in, the hood was thrown back and the man himself revealed, swigging liberally from a bottle of Jack Daniels and periodically spitting at the audience before him. As you do.

Over the course of the evening the band were joined onstage by Jørn Inge Tunsberg (Hades Almighty) during “Du Ville Ville Vestland”, Morten Shax (Endezzma), and Bjørnar Erevik Nilsen (Vulture Industries), each one adding his own unique flavour to the night. However the guest vocalists, while a nice touch adding to the unique and brotherly feel to the evening, didn’t take away from the fact that this was a Taake show, right down to the bone.

On the live stage Hoest and his hand-picked cadre of nihilists have a loose-limbed, swaggering tightness, one that speaks less of hours spent drilling in practice rooms and more of how this music simply flows through their veins – it’s their lifeblood, and comes naturally to them. The punk inflections, razor-edged riffs, and battering drums flow from a common core of true Norwegian black metal, adversarial, aggressive, uncompromising, all written and dictated from Hoest’s own pitch-black soul. The man himself is a whirling dervish onstage, clad in the simplest of attire, a uniform of ripped denim and leather which he has made entirely his own, face smeared with corpse-like make-up, and voice raised in bloodthirst and fury.

His interaction with the crowd oscillated between embracing their devotion with pride and castigating them for their transgressions, not least when he dedicated a track to the sadly deceased Trondr Nefas (Urgehal) and, visibly overcome with emotion, verbally lashed out at one audience member who couldn’t keep his damn mouth closed. Through it all though, the man came across as a simple paragon of the black metal spirit, undimmed by time or change, and the music followed suit, effortlessly individual and utterly definitive of the core of black metal as it stands today.

For me that was the true headlining performance of the night, one that will remain in my memory for years to come, for so many reasons (I haven’t even mentioned the part where Niklas appeared to try and bite Hoest’s cock off, or the quiet reverence displayed when Hoest removed his signature leather jacket and placed it carefully to one side, as it clearly holds a lot of memories for him). As such I didn’t bother sticking around to see Deicide, who’ve never really interested me to be honest. They were apparently on good form though, and I’ll give a shout out here to Nick, Adam, and Stefano, who tried desperately to convince us to stay, but to no avail. Sorry guys, not for me.

So there we go. Day 1 done. Several phenomenal performances, and a particularly affecting and unforgettable ‘headline’ set by the legendary Taake. Next up, Day 2.

6 Responses to “INFERNO FESTIVAL – DAY ONE”