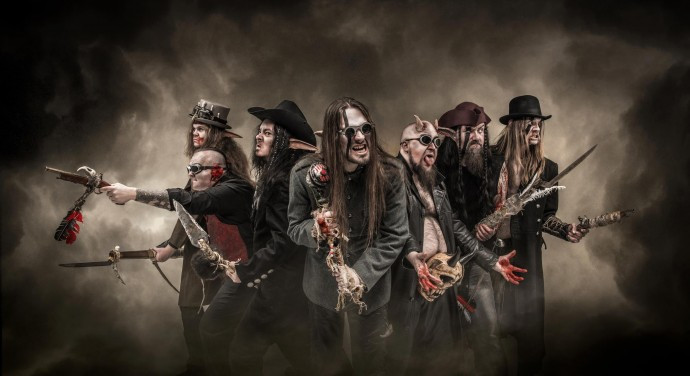 On most days at this site I try to pull together a round-up of new music, album art, and/or news that most interested me over the preceding 24 hours. It’s usually in the range of 3-5 items, packaged together in one long post. Today, just for the hell of it, I’m trying something different, something more like what certain other metal sites do — spreading what interested me over the course of the whole day, one item at a time.

A renowned tribe of Finnish trolls have emerged from their underground lairs for another round of pillaging and plundering, spreading their wicked humor and destructiveness like the plague. In other words, Finntroll’s new album Blodsvept is out now, everywhere (on Century Media).

This morning Finntroll premiered an official video for one of the new songs,”Häxbrygd”, which apparently means “witch broth” or “witch stew”. The song goes straight to our list of candidates for 2013’s most infectious extreme metal songs. Music to jump to, music to bounce to, music to fornicate to. A little bit of accordion, a little bit of brass, a whole lotta nasty.

And the video? A feast for the eyes, the trolls decked out in their finery with pointy ears a-flapping, tricking out their own special ride. Ready, set, GO . . .