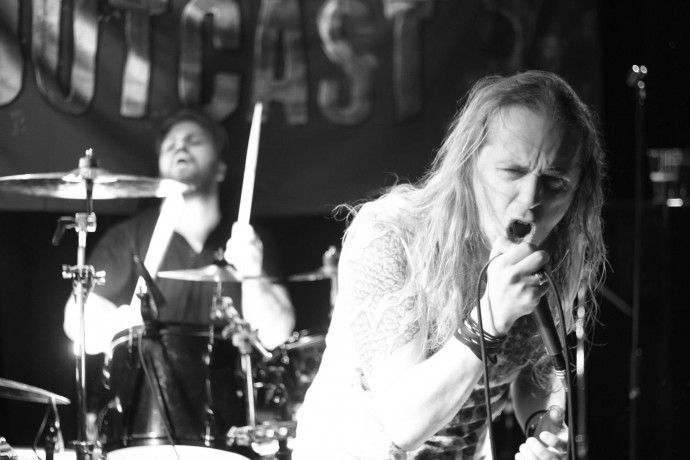 While the band drama surrounding Norway’s Keep of Kalessin continues to unfold, Sunday brought cheerier news from the camp of another NCS favorite, Hellish Outcast.

The background: As our wandering metalhead Andy Synn reported from Oslo just as the news was breaking, and discussed at greater length in his own subsequent post about Opening Day at the Inferno Festival, Keep of Kalessin have disclosed that their talented frontman Thebon is out, and their founder, songwriter, and guitarist Obsidian Claw has taken his place behind the mic.

At first KoK reported, with tongue in cheek, that Thebon had disappeared into the wilds of South Africa with his girlfriend, leaving the band no choice but to record their next album without him.

Thebon then surfaced with a somewhat peeved rejoinder. As these things go, KoK then responded with a lengthy, less tongue-in-cheek explanation for Thebon’s ouster. The recriminations will probably continue, because that’s the way band drama works.

But I don’t really enjoy reading about band drama. I much prefer reading about the other news that’s the subject of this post. While Thebon’s days with KoK may be over, he’s still a fixture in Hellish Outcast, and Hellish Outcast will soon be entering the studio to record a new album, tentatively entitled Stay of Execution.

Why is this good news to us? Well, read what we’ve written about this band’s previous efforts and you’ll understand.

As explained in a press release we received from Hellish Outcast’s monstrous drummer Mads Lilletvedt (and to be clear, I mean monstrous in the sense of what he does with a drum kit), the band will be recording the album in May with producer Russ Russell (Napalm Death, Dimmu Borgir, Evile) at the storied studio in Grieghallen, Bergen, where bands such as Enslaved, Emperor, and Immortal have laid down landmark albums.

From the perspective of this diehard metal fan, it really doesn’t matter who (if anyone) is to blame for Thebon’s ouster from KoK. KoK are sounding awfully good with Obsidian on vocals (check out the killing new “Introspection” video if you haven’t already), and Thebon will no doubt sound very good on the new Hellish Outcast album, about which we are very excited here at NCS.

In a nutshell, we have two more excellent reasons to throw horns to the sky in 2013.