The party itself also had a couple of presentations explaining and extolling the history of Inferno and its connections with the Oslo metal scene and with the Indian metal scene with which it has steadily been building a relationship. The first actual band of the night kicked off downstairs in John Dee at half 8 and were something of a special case. From The Vastland mainman (and multi-instrumentalist) Sina hails from Iran and was performing after special invitation. Being a one-man black metal act meant that, of course, he needed to find some live members… and oh were live members provided.

His backing band (Sina handling all vocals as well as guitar) for this show were comprised of Thor Anders Myhren (AKA Destructhor – Myrkskog, Zyklon, Morbid Angel) on second guitar, André Kvebek (AKA Tjalve – Pantheon I) on bass, and Vegard Larsen (AKA Vyl – Keep Of Kalessin) on drums. Certainly not a group of musicians to be sniffed at.

The four-piece absolutely crushed it, delivering a distressingly tight performance of skin-flaying black metal, accented by sudden death metal tempo shifts and esoteric melodies drawn from Sina’s own culture and background, which melded seamlessly with the age-old roots of the Norwegian black metal scene. I’ll be dropping a review of the band’s recently released album as soon as I’m able to, but for now I implore fans of Weapon, Melechesh, and Enthroned to seek out the band’s music at all cost.

Unfortunately I wasn’t able to stay right up to the end of the band’s set, as I had to hot-foot it over to Bla Bar to see one of the band’s I’d really come to see, Norway’s own Krakow. The best way I can think of describing the band’s sound is ‘quiet thunder’ – it builds slowly and steadily before detonating in a bone-rattling storm of sheer force. It’s heavy without being angular, or abrasive, or blasting… it just overwhelms you in smooth waves of rumbling power. The brutish roars of frontman Frode Kilvik were balanced by René Misje’s frail, plaintive clean singing, as the band stretched time and space with their strange, effervescent brew of stoner vibes and nascent metallic power. Stunning. 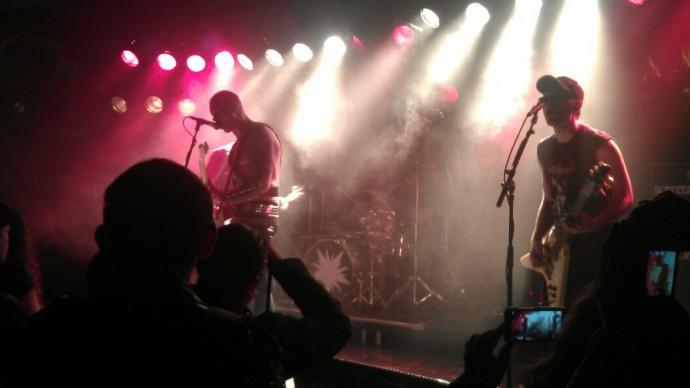 Back at John Dee we caught up with the retro terror-thrash of Blood Tsunami, whose delightfully ramshackle bullet belts n’ bruises vibe concealed a well drilled unit of heavy metal zealots. With three albums to their name the group certainly had a healthy well of material to draw from, switching back and forth between filthy, Motorhead-inspired rock, a scrappy Anthrax-style gallop, and a blunt-force thrash attack reminiscent of old-school Testament, with the punk factor turned all the way up to eleven. Despite not being my usual cup of tea, these guys gave it their all up there and left me very impressed.

As a surprise for the assembled crowd the next to appear onstage was Keep Of Kalessin man Obsidian C, there to introduce the band’s new video for “Introspection”, exclusively debuting that evening. He also informed the crowd that there had been a big change in the band’s line-up, as they had parted ways with singer Thebon, and so Obsidian himself had stepped up to become the band’s new vocalist!

The song itself continued the progression of the band, even further establishing their post- black metal existence – though the roots are still there, the band’s sound has never been more removed from the black metal aesthetic, and thus never more their own. Obsidian’s signature riffing style draws from all quarters of the metal landscape equally, tied together by Vyl’s cold-blooded precision behind the it, and Wizziac’s ever-present, looping snarls of bass.

The vocal change, as you may have gathered if you’ve watched the new video, certainly hasn’t done the band any harm, particularly as Obsidian is on record a long time ago as being the one who writes all the lyrics and vocal melodies, as well as directing what vocal ‘style’ works best for each part. So although I’ll miss Thebon (still very much active in Hellish Outcast, at the very least) I’m glad the band have drawn together and tightened up in the face of this change.

Although I really wanted to stick around and stay up to watch Nidingr at 01:00 am, the rigours of the day’s travelling, combined with my steady (and expensive) rate of alcohol consumption, were definitely catching up with me at this time, and after a bit more random chatter and bickering with my international metal brethren, we decided to head back to the hotel and get what turned out to be an epic amount of sleep, in preparation for the long day on Thursday!

(FYI – I actually bought a new camera for this event, and even tested it at practice, but one picture in to From The Vastland’s set it completely died on me. Luckily my girlfriend’s phone has quite a good camera in it, so there’s at least one photo of every band we saw!)