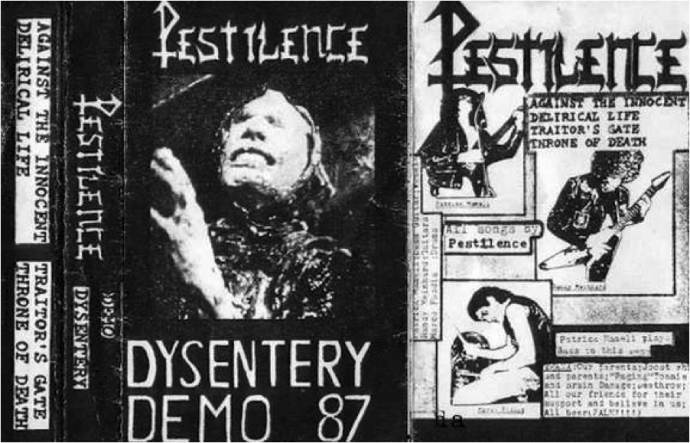 (In this post TheMadIsraeli continues his retrospective assessment of the metal contributions of Pestilence. To read the introduction, go HERE.)

So here we are, starting the Pestilence series in earnest.  Pestilence in their early years played surprisingly primitive death-thrash compared to what they would become.  Pestilence were also one of the first notable bands out of the Dutch scene, an area that has become a diverse hotbed of some of metal’s most interesting bands, evolving to the point where Textures may now be the best known.  Not having been around at the time when Pestilence released Dysentery and The Penance, I can’t say how well-known the band was at that time.

These two demo’s were released in the same year, and both had a sound that really feels like it has nothing to do with the band’s infamous debut Malleus Maleficarum.  With that said, let’s start with the very first recorded output, Dysentry.

If that tape cover isn’t old school as fuck I don’t know what is.  Dysentry appeared in 1987, a blossoming period for the burgeoning death-thrash movement that was beginning to erupt.  This was the era of Sepultura, Devastation, and Protector, an era of vomity putrid vocals of a raw primal nature, detuned guitars in most cases, and frantic riffing that paid more tribute in its tone and aesthetic to a grimy frantic hardcore mood that merely channeled the technicality and speed of thrash metal as it had developed up to that point.

Pestilence’s debut may even be seen as a precursor to the old school European death metal sound in general, as it sparks a lot of notes that feel like Entombed, Dismember, Grave, and the like.

The mix, for a very first demo in the 80’s, is surprisingly good, with just enough clarity to everything. But I’ve always had a fondness for garage-level mixes in old metal.  It adds an atmosphere you just don’t get in modern music anymore.

Overall, I really like the music on this first release.  It’s nasty, speedy as fuck, and has some catchy ass old school breakdowns going on that grab you.  The riffs will have a familiarity to them if you were into this kind of thing to begin with, but if you’re like me you can gobble up shittons of this stuff and never get bored with it.

Moving onto The Penance … 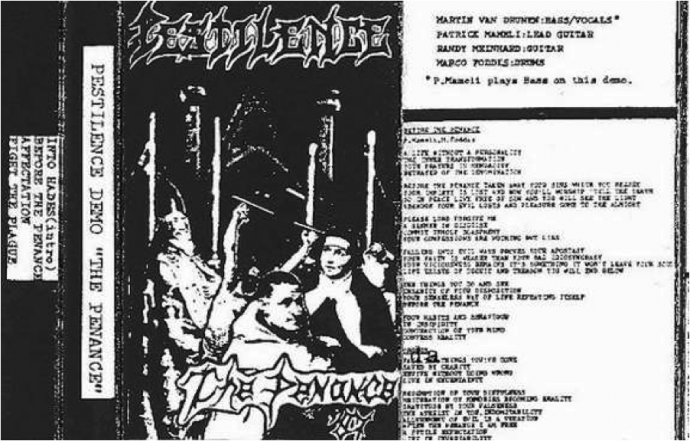 Although released in the same year as Dysentary, The Penance shows an immediate leap in maturity by comparison.  The eerily melodic harmonized guitar lead that loops in the opening instrumental “Into Hades” already channels a completely different vibe.  The opener in earnest, “Before the Penance”, is an epic seven-minute behemoth.  This was also the introduction to a vocalist NCS readers should know and hold near and dear to their hearts, the mighty Martin Van Drunen.

“Before the Penance” shows the band quickly advancing from a straight-up feral approach to something that incorporated a bit more drama.  The entire opening of the song, trudging along at a marching pace, lasts a little over three minutes before finally exploding into a maelstrom of souls being ripped from the river Styx itself.

Van Drunen’s voice, like Mamelli’s, was extremely raw and underdeveloped here. To those who haven’t heard this, his thrashy bark is going to sound weird compared to the vocal grizzly bear he became later on.  His voice fits what goes on here though, so it isn’t like there is some sort of disconnect.

The songs are all well-written and overall an improvement over Dysentery in terms of composition.  This is where, as far as I can tell, Pestilence acquired the sense of drama that would also define them, with the entire intro of “Before the Penance” described above being a prime example.  But apart from a huge step up in how the sound was executed, the demo was still mainly seething with rage, fast-as-fuck, low-tuned death-thrash in much the same vein as Dysentery.

It’s interesting hearing Pestilence in this primitive state.  The music, for the time when these were released, is actually quite badass and worth checking out; it’s just not the Pestilence we all know and love for the most part.  Something about the overall mood of the demo’s, especially Dysentery, baffles me: They have such a prominent Swedish death metal vibe, yet (and you all can correct me if I’m wrong) I wasn’t aware that the style had really developed back in ’87. Nonetheless, the music here is really good.

So, how many of our NCS readers have actually heard these demo’s?  What do you think of them?  Music linked below, as usual.

2 Responses to “HIGHER CRITICISM: PESTILENCE — “DYSENTARY” AND “THE PENANCE””