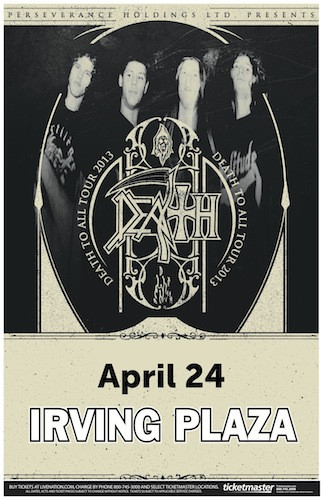 Life can be summed up as follows: You don’t get what you pay for, and then you die. Which is why getting things for free is so damned important. It gives you that little flicker of hope that maybe things will balance out before your tiny spark gets sucked into the void. Of course, it’s a false hope, but the capacity for self-delusion is vital in leading a happy life.

Okay, now that I’ve got you in a cheery mood, here’s some a that free shit.

“DEATH TO ALL” TICKETS

The Death To All tour, which pays tribute to late legendary vocalist and guitarist Chuck Schuldiner and raises money for the Sweet Relief charity, is starting its 2013 run tomorrow night in West Hollywood and will continue through the end of this month. Unlike last year’s inaugural edition, this tour will feature one line-up, the Human–era Death lineup consisting of guitarist Paul Masvidal, bassist Steve DiGiorgio, and drummer Sean Reinert (with Max Phelps of Exist providing the vocals). The set list will focus on Human and the three Death albums that came before it, Scream Bloody Gore, Leprosy, and Spiritual Healing.

And guess what? Thanks to Live Nation, we have two sets of two tickets to give away for the tour’s April 24 stop in New York City at Irving Plaza.

Here’s all you have to do to put yourself in the running for a pair of these tickets:  Either leave a comment on this post or send me an e-mail to the address below with the word “DEATH” in the subject line, and we’ll make a random drawing for the two winners:

Be sure to use a real e-mail address so we can let you know if you won. We’ll e-mail the winners by April 19, so get your entries in before then. The winners will be on the guest list at Irving Plaza and will need to bring ID to claim the tix the night of the show.

And that’s it. For those who want to guarantee catching this event, paid tickets can be purchased HERE. 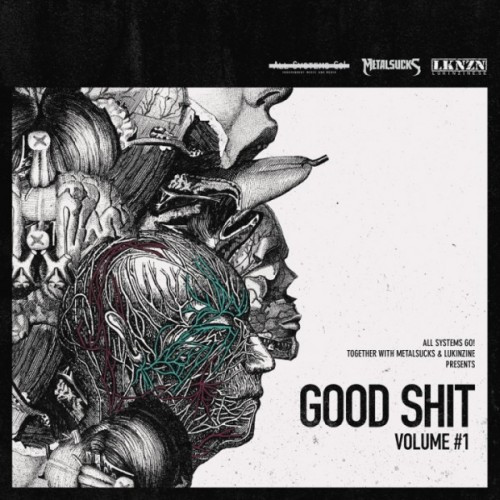 This next freebie doesn’t depend on the fickle hand of fate in a random drawing. It’s the inaugural edition of a new compilation series jointly provided by MetalSucks,  All Systems Go!, and Lukinzine and can be downloaded by anyone at no charge.

Its name is Good Shit Volume #1 and it includes 16 songs by some excellent bands, including Pig Destroyer, Ringworm, Rotten Sound, Call of the Void, Mourner, and Exhale (to name some of my own favorites).

The Soundcloud player for the entire comp is below and you can find the download link for the .zip file at MetalSucks HERE.

One Response to “FREE SHIT: FOUR TICKETS TO “DEATH TO ALL” AND ONE COOL COMP”