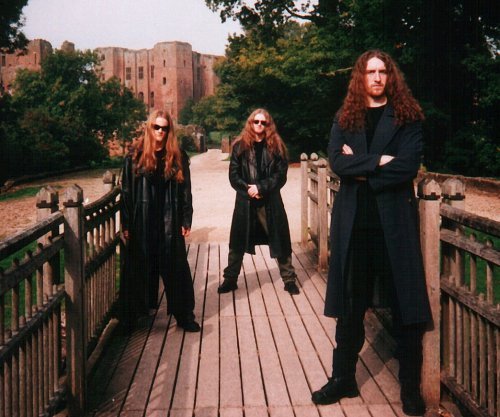 (Andy Synn delivers another SYNN REPORT, assessing the discography of the UK’s Mithras.)

Let’s stay in the UK for a second straight edition of The Synn Report, shall we?

Tech-death before tech-death became a pissing contest between directionless shred-lords, Mithras deal in a form of technically gifted, wilfully complex death metal that successfully marries progressive ambition with stunning instrumental prowess, without short-changing the listener in either regard.

Drawing from the more imperious side of Morbid Angel’s dark death metal aesthetic as their primary influence, together with an ear for the more challenging, arty side of Pestilence’s body of work, the duo who form the core of Mithras have woven these influences into a sound entirely their own – unique, difficult, esoteric, but ultimately rewarding – one that served, in hindsight, as a precursor to the spacey death metal sound slowly gaining traction today. Trend setters and taste-makers without meaning to be, they were one of the first death metal bands I had heard in a long time to truly take the sound and do something so distinctive with it.

Their mix of raw, pummelling drum work, crippling riffage, and finger-blistering technical skills stood head and shoulders above their competitors at the time, and remains so today. This is due not only to their impressive abilities behind the kit and on the fretboard – their bio-organic symbiosis of natural progression and seamless mechanical precision is nearly unparalleled – but can also be attributed to their patient perfectionism, whose song-writing focussed just as much on atmosphere as it did on aggression.

I’m not quite sure what the band’s status is these days — their last release was the Time Never Lasts EP in 2011 — but I’m hopeful we will, possibly even someday soon, get wind of new material from the band. We definitely want more. 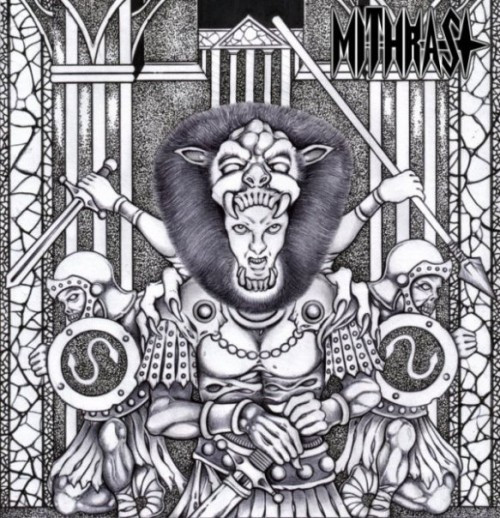 With their first full-length release Mithras clearly demonstrated an impressive early grasp of their own individual take on the death metal commandments, as well as dropping tantalising hints of what the future would hold for them.

Following the oppressive synthesised soundscapes of “Forever Advancing Legions”, the album kicks into high gear with the vicious one-two of “Trample Their Works” and “Sloping Altars”. The raw, uncompromising death metal bludgeon of the former, all jerking riffs and ceaseless, battering drums, is perfectly accented by the latter’s mix of pulverising blast-beats, scalding tremolo runs, and groaning, crushing riffage.

“Arena Sands” is another angular, jagged shard of death metal wreckage, one that twists and turns with mind-bending, face-melting technicality, and a truly bestial vocals performance. The sheer brain-busting intensity of the song’s metallic might is offset by clever and subtle injections of lithe melody and a lengthy, haunting ambient interlude.

“Amidst The Fallen Arches”, “The Green Wanderer Returns”, and “Wrath Of God” form a strange triptych of instrumental pieces which, when combined together, move from Twilight Zone–esque horror, to pseudo-classical melancholy, to threatening claustrophobia, before the album picks back up again with the progressive complexities of “As The Winds Blow”, which twists its virile, priapic riffage into difficult, Nile-esque shapes, grinding away at an almost doomy pace, punctuated by sudden explosions of ravenous speed or scathing technicality.

“Vae Solis” is an absolute blast-furnace of devastating aggression and mind-bending intricacy, with a baleful, apocalyptic vibe and a Richter-scale sense of groove-based power. Moments of razor-sharp dissonance bloom into sublime melodies before transforming into chaotic patterns of technical insanity as the song builds towards climactic collapse.

The jagged, Morbid Angel-derived riffs and looping, sinuous leads of “Dreaming in Splendour” drag the listener along in their wake, before the song transitions unexpectedly into a soothing, melancholy interlude, which slowly builds back up into a murderous machine of stomping groove and searing speed.

The album ends with the neck-snapping technical shifts and prime, bloody, death metal riffage of “Tomb Of Kings”, which chooses to subdue much of the alien melody that infected previous tracks beneath a torrent of sledgehammer brutality, leaving only baleful instrumental closer “What Lies Beyond” to provide the last strains of gloomy disharmony. 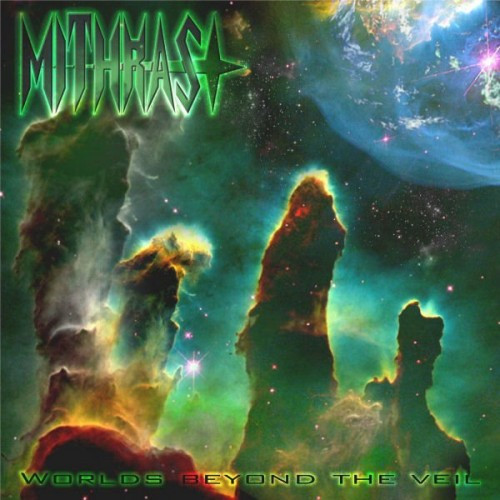 With Worlds Beyond The Veil the Mithras legion advanced in leaps and bounds from their debut, upping the atmosphere and nailing the unsettling vibe and intensity of their cosmic metal melange.

It begins with the lengthy sci-fi soundtrack of “Portal To The…”, which flows into “Worlds Beyond The Veil”, a punishing piece of primal power and propulsive percussion, whose Hate Eternal-esque intensity and extremity hides an undercurrent of carefully constructed complexity.

The titanic rumble of “Bequeath Thy Visions” is wrapped in a shroud of unsettling ambient noise and disharmony, while the shape-shifting cyborg riffage of “The Caller And The Listener” takes Spheres-era Pestilence and shoots it up with a cocktail of pure adrenaline and bloodsthirsty aggression to produce a veritable symphony of bone-scraping guitars, fractal rhythms, and vertigo-inducing leads.

“Break The World’s Divide” is a moody, War Of The Worlds-style interlude, leading into “Lords and Masters”, a virulent piece of monolithic chord sequences and blistering extremity, which diverges into moments of genre-fusing technicality and hypnotising melody as it progresses.

Following its mesmerising synth-led introduction, “PSyrens” transforms into an absolute riff-monster, complete with juddering tempo changes and soaring, progressive solo work, while “Voices In The Void” is a more extreme piece of swarming, whirlwind notes and slashing, knife-edge riffs.

Heavy instrumental track “Sands Of Time” is a lengthy, progressive number that transitions smoothly through a number of different approaches, incorporating both soothing ambience and mid-paced, bulldozing riffs atop a foundation of tumultuous, pinpoint-precision drumming.

“Search The Endless Plains” is another instrumental piece, but one of an altogether more ominous type. It sets the stage for the angular, challenging structures and swirling vortex of guitar leads that comprise “They Came And You Were Silent”, immediately followed by “Transcendence”, a thicker, more suffocating piece of grinding guitar riffs and ceaseless drum-hammering that switches direction to become an unsettling piece of melodic arcana during its final third.

The album concludes with the 13:37 piece “Beyond The Eyes Of Man”. It melds brutal, kerb-stomp riffage and absolutely savage vocals with a compelling array of majestic, imperial chord progressions and a flurry of scintillating solos. The middle movement of the piece shifts mode, first into a gargantuan death metal monster of tyrannical riffs, then into an unsettling piece of droning dissonance. For the finale the song transforms once more, becoming an altogether stranger, more progressive exposition of sublime atmospherics and dreamlike ambience, leading to an explosive, shocking conclusion.

Sample song: “The Caller and The Listener”

[audio:https://www.nocleansinging.com/wp-content/uploads/2013/04/04-The-Caller-and-the-Listener.mp3|titles=Mithras – The Caller and the Listener] 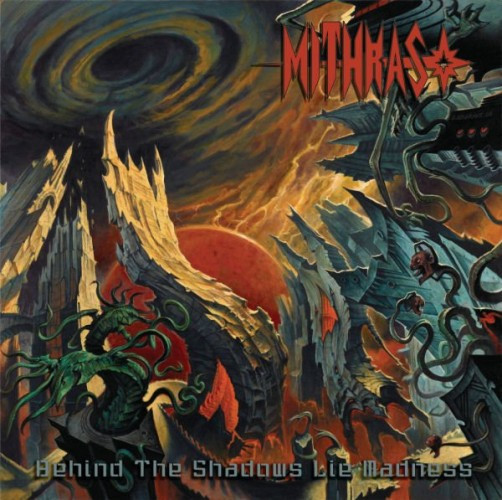 BEHIND THE SHADOWS LIE MADNESS – 2007

It may have taken 4 times as long for the band to produce the follow up to Worlds… as it did …Legions but that time was clearly well-spent, as Beyond The Shadows Lie Madness is a true classic of underground death metal art.

Haunting synthetic instrumental “The Journey and The Forsaken” leads the listener into the triple-header of “To Fall From The Heavens”, “Under The Three Spheres”, and “Into Black Holes Of Oblivion”, each of which teems with scything riffage and sublime celestial hooks.

“To Fall From The Heavens” immediately throws a progressive wrench into the works with its angular, shifting chords and unexpected injections of strident clean vocals, underpinned by a cataclysmic drumming performance, while the spine-tingling melodies and sandblasting riff-work of “Under The Three Spheres” is a more direct, face-melting assault on the senses. The tectonic grind and groove of “Into Black Holes Of Oblivion” meanwhile matches its spiralling lead work with a thunderous low end of bludgeoning drums and brutish, chugging guitars.

Instrumental track “When The Light Fades Away” is a cosmic cathedral of sublime synthetic sounds, which paves the way for the album’s centre-piece, “Behind The Shadows”, a nearly seven-minute long experience of captivating atmospheres, brutal vocals, and utterly CRUSHING death metal riffs. Epitomising the sound of the band in one fell swoop, its devastating staccato rhythms and suffocating layers of brooding riffs are intertwined with threads of shadowy melody and esoteric ambience conjured by the stellar guitar-work — prevalent not just here but on the entire album.

“The Twisted Tower” is a concoction of cryptic, Decapitated-esque riffs and head-spinning technical rhythms that also conjures up a propulsive sense of groove beneath its rapid note-flurries and scatter-gun blast beats, while “To Where The Sun Never Leaves” is a musical journey of skyward soaring melodies and teasing bass-lines whose dizzying lead guitar work is propelled by an unstoppable juggernaut of hammering drums.

The interlude of “The Beacon Beckons” channels some Pink Floyd-ian weirdness into the band’s sound, before the titanic death metal monolith of “Thrown Upon The Waves” brings the album to a monstrous close, with only the unusual strains of “Into The Unknown” providing a short, unsettling aftermath to the death metal devastation.

An absolute, and utterly underappreciated, classic, Behind The Shadows Lie Madness deserves your rapt attention and as many accolades as can be reasonably heaped upon it. A phenomenal album.

Sample song: “Behind The Shadows” 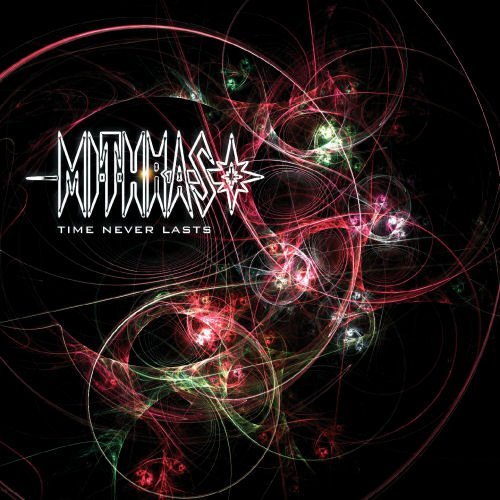 The first of the EP’s two tracks, “Time Never Lasts” is a spacey, intricate number of complex melody and restrained power. Majestic leads soar like comets before plunging into the depths of dense and impenetrably layered riffs. The vocals of the returning Rayner Coss are both clear and powerful, expressive and nuanced in their ability to convey both deep emotions and complex ideas, while Leon Macey’s drumming continues to meld his impeccable sense of technical precision with his smooth and individual style of playing.

By contrast, “Inside The Godmind” showcases the other side of Mithras’ divergent personality, delivering a devastating attack of rhythmic, mechanised guitar-work and ominous, threatening atmospherics, over which primal growls rage with all too human anguish and fury. Twisting and turning, the track whips up a storming, elasticated groove that bounces and refracts with slamming, meteoric force. Crunching riffs heave with the incalculable weight of dark matter, while swirling leads and throbbing, pulsar bass-lines combine to induce an undercurrent of bleak, black hole ambience beneath it all.

Sample song: “Inside The Godmind”