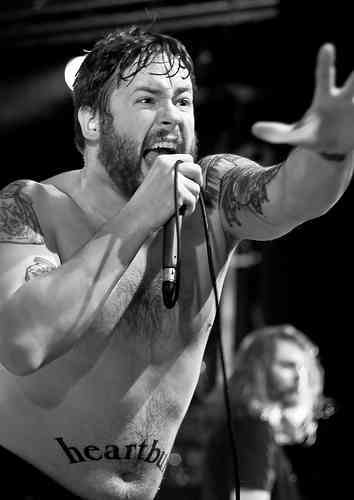 Yesterday Trevor Strnad of The Black Dahlia Murder (a band we like quite a bit around here) went on a rant about piracy on Facebook. That was yesterday. Today, he posted this on the band’s Facebook page:

“I want to apologize to any of you guys that were bummed out by my frustrated, overly aggressive, and pessimistic posts yesterday. Me and the guys are eternally grateful for all of you and your support, whatever form. THANK YOU! We’ll see you this Summer and beyond… – Trevor”

Apart from sounding a retreat, it looks like he and the band have also deleted the original rant, too.

I sort of wish he had stuck to his guns, even if he did go a bit overboard with yesterday’s missives to the masses. Saying nothing that might conceivably alienate a potentially paying customer, or apologizing when you do, is the way mainstream recording artists are trained (and ordered) to behave by their handlers, and are therefore bland as shit to listen to (except when they’re wasted and going after the paparazzi). And besides, what potentially paying customers did Trevor risk alienating? A bunch of thieves who think they’re entitled to download and probably aren’t going to spend any money on TBDM anyway?

Truthfully, Trevor really didn’t say anything new, and nothing new has come  out of the flood of vitriolic comments, rants, and counter-rants that have swept through the interhole since his first broadside. It’s the same old story. It’s like listening to the latest round of “debates” over gun control. Not one new thing gets said, and not one thing seems to change. But still, I think Trevor should have been making a different argument than the one he made.

In a nutshell, Trevor urged fans to buy a copy of the band’s new album Everblack, despite the fact that TBDM only receives “literally a fraction of a penny per album”. His point was that unless the album sells and thereby proves that TBDM is “relevant”, “the music industry” won’t make it possible for TBDM to play concerts, tour, create and sell DVDs and new music, and sell merch. He insisted, in all capital letters, that TBDM needs to sell CDs “TO EXIST!”

And by the way, he also accused 98% of the band’s Facebook fans of being “content to steal the album and in turn we get nothing”. That may not have been the smartest thing to say and it probably wasn’t fair to most of TBDM’s fans either.

Look, it’s easy to make fun of this, because his rant reflects the perspective of someone who has achieved far more popularity and success and received far more financial and marketing support from “the music industry” than the VAST majority of underground bands ever have or ever will. TBDM could tour and record new music and sell that music and sell other merch and EXIST! even if they did not sell a high volume of CDs. How do we know this? Because that’s what most other metal bands do, because they have no choice.

Does this mean that Trevor was wrong to call out people who steal TBDM’s music instead of paying for it? Not in my book. But I don’t find the reasons he gave very appealing or sympathetic. And those reasons will never advance the debate very far. They will always trigger responses by the thieves that they download the music to try it out, that they spend money on merch (claiming this is what the bands really want anyway), that downloading music actually helps increase sales by spreading the music around to people who will eventually buy it, that CDs are a dying breed and selling them is a stupid business model, etc, etc.

In a nutshell, when a band calls out fans for stealing their music, offended fans react by saying “we know better than you do what’s best for your business, so just shut the fuck up”. And claims about what does and doesn’t actually put more money in a band’s pocket can almost never be answered with hard evidence. So it just goes round and round and round . . . .

Yes, this debate really is mostly about money, but as soon as you start openly talking about it in terms of money, then the whole “discussion” goes south in a hurry. And it goes south in an even bigger hurry when the people who complain are doing it from a position of success. When the complaints are coming from a struggling band who are obviously just trying to sell enough music to pay for recording the next album and maybe making some physical copies for collectors, people don’t seem to react quite so violently.

Here’s the argument I think should have been made, and should continue to be made until the culture of metal changes: When an artist creates a work of art, it’s theirs. They own it. They get the right to decide what to do with it. They can give it away if they want, but if they don’t want to give it away and they want to sell it instead, then that’s a decision they’re entitled to make. It’s up to them, it’s not up to us. And taking what they’ve created without paying for it is not only disrespectful, it’s THEFT.

There is no answer to that argument, or at least no answer that makes any sense.

(To read the full text of Trevor’s original rants, you can go read them at Metal Sucks.)

40 Responses to “OH LOOK, ANOTHER MUSICIAN IS BITCHING ABOUT PIRACY”