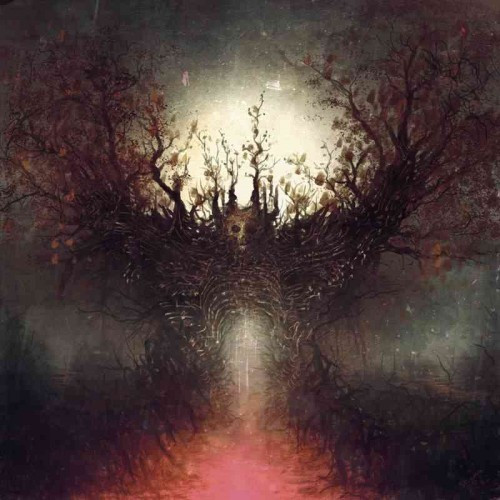 I know that most of our readers don’t spend time on Facebook (or at least most of you didn’t the last time we ran a readers’ poll to find out such things), but for those of you who do, you probably know that every afternoon here in the Pacific Northwest I post a piece of artwork or a photo on the NCS Facebook page. Most of the artwork is surreal or dark, and sometimes I also post artwork by metal album artists whose creations I like.

One of those artists, whose work I’ve also frequently featured here at the main NCS site, is Sam Nelson (“Stigma”). You’re looking at one of his new pieces at the top of this post, which has rapidly become one of my favorites among the things he’s done.

Not long ago, Stigma started a contest for bands, and it’s about time I said something about it. It’s a cool idea, and one that I hope other artists might pick up on. Here’s the message from his Facebook page:

Here is a chance to get a free album cover painted by me. Send a song to my inbox that you’ve made along with a piece of text that evokes the emotion you’d like expressed in the artwork. (Lyrics, poem, brief story, or just a message. Only one entry per band.) I will pick a winner and announce on May 1.

May 1 is not far off, so if you’re in a band and looking for some kickass artwork — for FREE — send a message to Stigma via his Facebook page HERE. And if you’re not a musician but you know of a band who might be in the market for artwork for a new album, tell them about this.

Like I said, I think this is a cool idea, and one I hope other artists will adopt as well.  For people like me, eye-catching artwork often leads us to explore music that we would otherwise overlook, but especially for bands who are still in the early part of their careers there’s not a lot of money available to pay for it. There’s something to be gained for the artist, too — and I’m not necessarily thinking about anything like “marketing”.

In Stigma’s case, my sense is that he is looking for new inspiration — that he wants the spark that music can give to creativity, and a chance to be exposed to new metal at the same time.

So let’s see what happens with this.  I’ll report about how this contest ends, and include a feature about the winning band, and then we’ll follow it to its conclusion with the creation of the artwork. And if any other artists decide to do something like this, let me know and we’ll help get the word out about it.