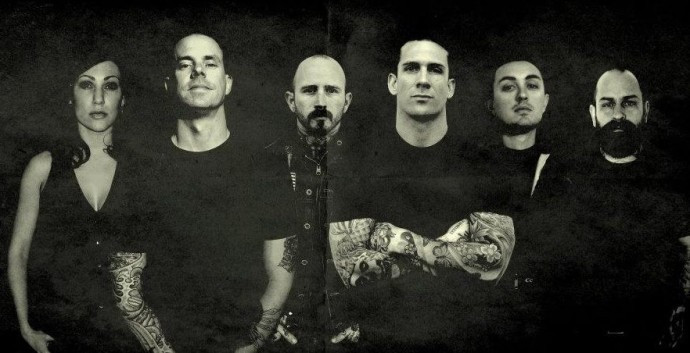 (In this post Andy Synn reviews the final UK performance of Orange County’s Bleeding Through and provides his own very personal farewell to the band.)

So on Sunday, 21st of April, Bleeding Through played their final show in the UK. I was originally meant to be heading down to their London show on the Friday, but ended up spending the evening mildly hallucinating from some random illness I picked up, and so came close to missing the band entirely. Thankfully, although I wasn’t 100% by Sunday I was at least able to drag myself out and catch the band, performing the final date of this, their last-ever UK/Euro tour.

Now I realise some of you probably don’t like Bleeding Through, and whether that’s through a sincere dislike of what they do or because you simply wrote them off a long time ago, that’s ok. But I’ve been a fan for a long time now, ever since 2002’s Portrait Of The Goddess (I’m afraid I didn’t get in on the ground floor with Dust To Ashes, which probably makes me some kind of poser), and the announcement of the band’s impending dissolution definitely had me down in the doldrums.

So what I’m going to do here is to give my impressions of the gig, intercut with some video footage, followed by some final thoughts and feelings inspired by seeing the band for the very last time.

The sextet took to the stage before a nicely packed venue (a relatively mixed crowd of capitalised-tshirt wearing scene kids, plaid-wearing hardcore “bros”, garish-haired emo chicks, and greasy Jersey Shore wannabes, along with the occasional dressed-down, non-clique music fan) and kicked straight into “Love Lost In A Hail Of Gunfire”, igniting the crowd into a frenzy of screaming voices and flailing limbs.

The band looked to be firing on all cylinders, performing with an extra frisson of intensity entirely suited to their last-ever UK show, from Marta’s reckless windmilling to Derek Youngsma’s precision assault on the kit. Frontman Brandon Schieppati was a titanic presence, his super-pissed-off harsh vocals and soulful singing voice matched by Ryan Wombacher’s throaty snarl and soaring harmonies, while the pairing of Dave Nassie and Scott Danough on guitar shredded up a storm of murderous riffs.

The set focussed most heavily on their breakthrough This Is Love, This Is Murderous, its (questionable) follow-up The Truth, and the particularly bleak Declaration. In fact, the only disappointing thing about the night (well, apart from the band’s imminent demise) was how little of last year’s The Great Fire was played, in favour of more crowd-pleasing stuff from The Truth.

Following a triplet of songs from This Is Love…, the band unleashed their darker, more malevolent side with a brace of tracks drawn from Declaration, beginning with a truly vicious run-through of the title track and concluding with a menacing rendition of “Sister Charlatan”.

It was interesting, amusing even, to see the swaggering pit-warriors — who just moments ago had been strutting their stuff like testosterone-stuffed peacocks, desperately throwing shapes and trying to act tougher and cooler than the rest — left flat-footed by the band’s shift towards nastier, more blackened territory.

Tonight was a night of both celebration and regret. The atmosphere switched back and forth between sorrowful and celebratory, the crowd at times subdued, at times chaotic. This mood was reflected onstage: every song delivered with a manic zeal, the band painfully, physically, aware that every song would – in its own way – be their last. Yet between tracks the group were often quite solemn, none more so than Schieppati, who at one point physically broke down while addressing the crowd. The thought of this being the last time they would ever play here left him clearly heartbroken, and the frontman had to take a few moments to compose himself before continuing.

Pummelling classic “Rise” was bookended by a frenzied version of “Anti Hero” (off 2010’s self-titled album) and a truly crushing “Goodbye To Death” (off last year’s bruising The Great Fire), all enhanced by swathes of dark melody and eerie ambience courtesy of Marta’s oft under-appreciated keyboard playing.

The fact of the impending break up still doesn’t entirely make sense to me. Schieppati stated, with clear sadness, that the band had always been about giving their all, on record and live, and that they had simply come to a point where this wasn’t possible anymore. No further or clearer explanation was given. The who’s, the why’s, and the wherefore’s remain unspoken, and yet you can clearly see that the impending break-up is taking a real emotional toll on the band. And I suppose it’s even more sad because, in my opinion at least, the last three records the band produced have been by far their best work — darker, more extreme, and heavier on both the hardcore and black metal ends of the spectrum. I suppose, for what it’s worth, at least the band go out on a high, having delivered an uncompromising epitaph with last year’s The Great Fire.

The set closed with a bunch of crowd-favourites drawn from The Truth and This Is Love…, the highlight of which was a killer version of “On Wings Of Lead”, with its mix of brutally infectious riffage and moody clean vocals. The band leaving the stage was certainly an emotional moment, soothed somewhat by the crowd’s refusal to let them leave without an encore, which the band gladly returned to provide – over-running their curfew to provide the faithful few with one last song.

So that was it. The last time I would ever see Bleeding Through live. A bittersweet moment if ever there was one. The show itself was as fervent, as earnest, and as honest as any I’ve been too, the band playing as if their lives truly depended on it, yet was coloured by the inescapable knowledge that each song brought us ever closer to the end. Many in the crowd, the ones to whom the band truly meant something more, left the venue in a sombre mood, as it finally sank in that this was their last time seeing the band live.

It got me thinking a lot about WHY it is I love Bleeding Through. Certainly I don’t actually have many friends who also like them. No close friends at all, in fact. And the people I do know who like the band often seem to like them for strikingly different reasons than I do. I suppose it’s no coincidence that as the band’s sound has mutated over the last several years, becoming several shades darker and significantly more abrasive, their record sales have dropped off, yet my own love for them has only increased. That’s not because I’m being contrary or elitist, it’s simply that the band themselves have stuck to their guns and chosen to follow a heavier, less accessible path – the sort of path where for every 10 fair-weather fans they lose, they gain one die-hard follower. Someone like me.

One of my central reasons for liking the band became crystal clear during the course of this show. In a display of surprising vulnerability, Schieppati admitted just how much the band, and the fans, had meant to him over the years. That at the age of 19, at the bleakest time in his life, he’d simply put pen to paper, producing lyrical scraps and ideas that would form the first Bleeding Through songs, in a desperate attempt to deal with all the feelings and pain inside him. It was lyrical therapy, the openness of which is largely anathema to my very British sense of detachment and cynicism, but which I think ultimately connected with me on an unexpected level.

Bleeding Through remind me of a time before I became as cynical as I am today – a time back when I loved hardcore for its forthrightness and honesty, before it became a fashion parade, before it became more about who you know, and how cool you are, than about simply being who you were. Schieppatti’s lyrics – aggressively straightforward, often to the point of bluntness – reflect a simple sincerity that’s undeniable, yet also a deep-seated vulnerability far more believable than the half-hearted displays of emotion seen in so many other acts.

From the start they delivered hardcore heart with a metallic approach (or vice versa, depending on where you’re coming from), but it was their steady drift toward an ever heavier, more blackened sound – without ever losing their honesty or their earnest nature and in defiance of expectations and the demands of popularity – which kept me coming back, year after year, long after many of their peers had fallen by the wayside.

Ultimately, for what it’s worth, the band’s integrity and drive, though at times shaken by bad choices or bad timing, remained intact until the end. They were a band who managed to be “for the fans” without pandering to them, who played for the love, for the need, of playing. And I will truly miss them.

8 Responses to “BLEEDING THROUGH — GOODBYE TO DEATH”