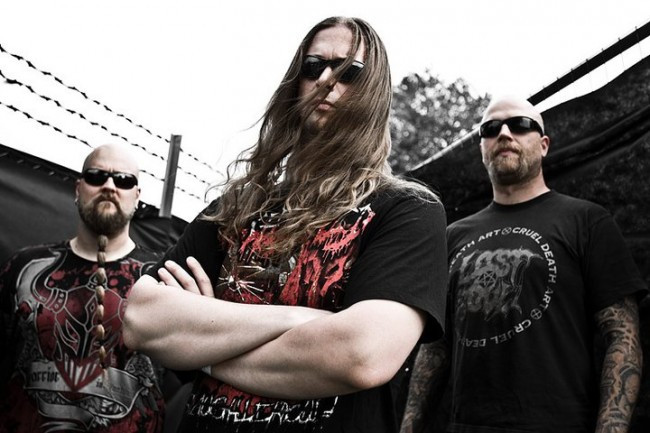 It’s been a while since I’ve written about Sweden’s Torture Division (pictured above), and some of you may be unfamiliar with them. Allow me to fix that. The three members of the band – Lord K Philipson (guitar), Tobben Gustafsson (drums), and Jörgen Sandström (bass/vocals) — collectively have over 60 years of combined death metal experience, including membership in bands such as Grave, Entombed, Vicious Art, The Project Hate MCMXCIX, Vomitory, and God Among Insects.  In their words, “we know what we do, we love what we do and that we will keep on doing it until the end of days.”

They also have an unusual approach to recording and distributing their music. Their modus operandi is to release short demos and give them away for free. In fact, they have no plans to record an album — ever. However, every time they finish releasing a group of three demo’s, they’ve been giving labels permission to package them up and sell them as compilation CDs. So far, this has happened twice (two CDs have been released, each collecting three demo’s). The next compilation, The Army of Three, will include their two most recent demos plus some additional tracks and will be released by Abyss Records.

Based on a recent statement on their FB page, Torture Division also plan to release three new 3-track demos in 2013, as well as two split releases (one with Asphyx that will include a brand new track as well as a cover song, and a second split about which details haven’t yet been revealed). But while we’re waiting for all of this, Torture Division have just given all of us a stand-alone song for free download called “Gimp Grind”.

“Gimp Grind” was originally recorded for a split that got postponed, so the band decided to include it in the next comp (which will also include “LiK” and “Bring on the Corpses” in addition to the tunes on the last two demos). As noted, you can get “Gimp Grind” for free at this location. Why should you get it? Because it’s goddamned obliterating, that’s why. It’s a thrashing, grinding, lacerating, blasting, torching piece of death metal by some dudes who know what the fuck they’re doing. Listen:

To get the band’s other releases as free downloads, visit their official web site. And of course, if you like what these dudes are doing and support their approach to distributing music, throw some money their way as a donation via that site or buy some merch. It will help finance more true metal of death.

2 Responses to “NEWS AND NEW MUSIC FROM TORTURE DIVISION”