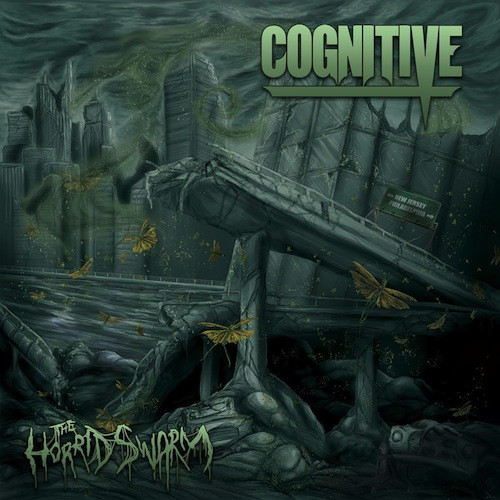 Cognitive’s debut EP The Horrid Swarm really crossed  me up. As I started listening to it, I thought it was going to be one thing, and it turned out to be many things. By the time it ended, my head had been spun around, like that possessed chick in The Exorcist. You know, all the way around, but somehow still attached.

The opening track, “In the Form of A Drone”, is a speedy, brutal battering about the head and shoulders, a tech-death manifesto that proclaims itself with pummeling riffs, blasting drums, and skittering guitar leads, not to mention a harsh vocalist who bellows, roars, and barks like a demon hound quite convincingly.

The song even has a bass drop, a breakdown, and some slam chords woven into the mix. And like everything else on the EP, the music channels the power of compulsive groove even when the rhythms are changing rapidly and the notes are flying like bullets.

But looking back on it, I can see that the song included hints of something more to come — a couple of brief guitar solos that writhe and spiral, and whose prog-ish melodicism contrasts with all the surrounding brutishness. 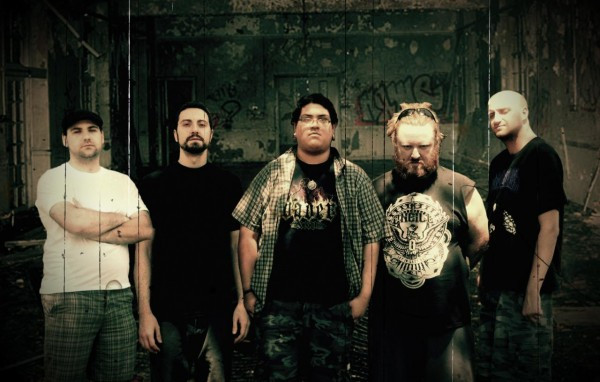 More hints came in the following track, “Falling Skies”. Did I hear a jazzy little guitar lead briefly surface in the head-whipping storm? Wasn’t that a spacey, almost ambient guitar sound that came floating in over all the merciless, start-stop, tech-death clobbering? I don’t think I imagined those moments.

And sure enough, all became clear in the EP’s final three songs: Cognitive have interests beyond opening the blast furnace doors and unleashing a tech-death inferno (which they do quite well, by the way). There, in the middle of the thundering stomp and jittery guitars of “Numbered and Slaughtered”, is a lush, melodic instrumental passage led by a beautiful guitar solo. While “Essence Oblivion” is busy assaulting the senses with a swarm of flashy fretwork and a rhythm section that booms and crushes, another one of those prog-minded reverberating guitar solos floats dreamily above all the mayhem beneath it.

And in the final track, “The Horrid Swarm”, the EP ends with an extended guitar solo that traces phosphorescent streamers in the mind, with warm bass notes as accompaniment. Of course, that comes after the listener has been thoroughly softened up by a flurry of battering rhythms, pneumatic riffs, and smashing cymbals.

So, how to sum this up? It’s like hot, frothy sex between Suffocation and Cynic, leaving blood on the walls and something dreamlike in the mind. Watch these guys — they’re going places.

The Horrid Swarm can be downloaded or ordered on CD via CDBaby, and it’s on Amazon mp3 and iTunes as well. Cognitive’s Facebook page is at this location. Here’s all the music:

2 Responses to “COGNITIVE: “THE HORRID SWARM””