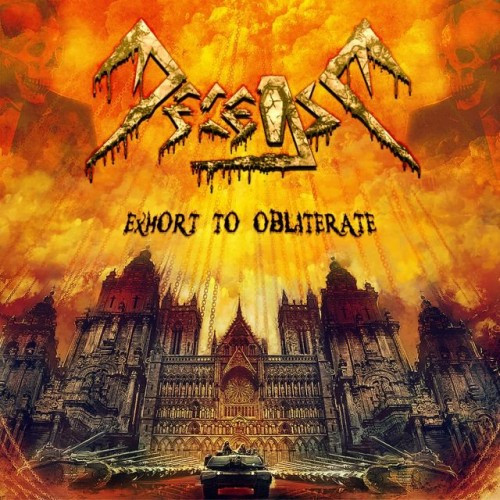 (In this post TheMadIsraeli reviews the debut album by a Romanian band named Decease.)

Death-thrash is one of those sub-sub genres of metal I will be eternally in love with. The rancid, putrid vocals, the scorching riffs that mix thrash’s precision and technicality with death metal’s heft and skin-flaying speed, the non-stop assault of an old-fashioned thrash beat (or skank beat, as Suffocation call it), I’m just all bout’ it. I ran across the video for Decease’s single off their debut Exhort to Obliterate called “Atrocious Deeds”, and my ears were immediately hooked. After Islander shared that video in a round-up, the band was kind enough to hook us up with the album.

I’m glad they did. Decease have a lot going for them. Influences can be heard from early Kreator, early Sepultura, and Exhorder. The resulting sound is a blitzkrieg of surgical precision, raw intensity (balls to the wall, as it were), and a paradoxical sense of reckless abandon. The band is a three-piece, consisting of guitarist/vocalist Radu Vulpe, bassist Catalin Vulpe, and drummer George Alb.

The rusty-blade attack of the production, combined with the zealot-like attack of the riffs and unrelenting assault of the rhythm section, all topped off by Radu’s Chaos A.D.-era Sepultura death grunts, should send you into a whiplash-inducing trance. I would certainly hope so, considering we do usually favor the obscenely brutal and intense around here.

This album is only twenty-eight minutes, which should give you an idea of what kind of ride you’re in for: non-stop speed, unrelenting savagery, everlasting pain. I’m admittedly not very familiar with the Romanian metal scene, but I’d wager Exhort to Obliterate is a victory for it.

Highly recommended if you want some savage audio butchery.

7 Responses to “DECEASE: “EXHORT TO OBLITERATE””