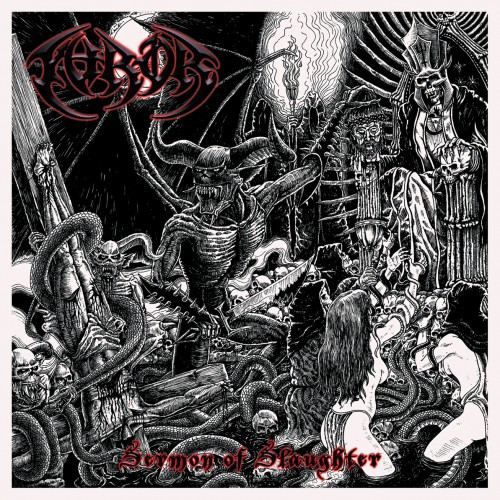 I’m usually racing so fast to keep up with the continual advent of new music that it’s rare to take a breath long enough to explore music from a previous year. But I did that yesterday, and I’m sure glad I did.

The Furor is a band from Western Australia that released three full-length albums between 2004 and 2011, after which the membership dwindled to a single individual, Disaster (Louis Rando). Undeterred by going it alone, he put out an EP in 2012 under The Furor name entitled Sermon of Slaughter, and it is indeed a sermon of slaughter. The exceptional quality of the EP is perhaps surprising, because Disaster’s forte is drumming.

He is a ridiculously good drummer and a true metal veteran, as witnessed by his current participation in bands such as Singapore’s Impiety and Australia’s Mhorgl, as well as his past membership in the likes of Dybbuk, Pagan, Pathogen, and Psychonaut. But it turns out that his talents are manifold, and he shows them off to good effect on Sermon of Slaughter.

The music reminds me of a cross between Marduk and Satyricon. It is unquestionably warlike. The songs generally move at a furious pace, with hell-ripping guitars, booming bass notes, and the kind of murderous percussion that makes full-auto machine-gun fire seem slothful by comparison. Disaster’s scalding, clawing vocals also remind me of Mortuus and Satyr — full of fire and venom.

But the songs are more than supercharged assaults of blasting hellfire.  Disaster keeps the songs interesting by incorporating melodic hooks and variations in the tempo and drum rhythms. The EP’s best song, “Conquest of Carnage”, even becomes sweepingly melodic by the time it reaches the finish, despite an utterly frenzied opening, and “Cult Crusher” includes some prominent rock riffs reminiscent of Motörhead (along with genuinely explosive energy).

This is well-composed, well-executed metal that’s slashing and thrashing but memorable. And did I mention that the drumming is jaw-droppingly ridiculous?

Sermon of Slaughter is available on Bandcamp for $4 AUD. Mhorgl’s James Campbell created the deliciously demonic artwork. The Furor’s Facebook page is here . . . and I’m happy to report that Disaster is working on a solo full-length under the name of The Furor. I’ll certainly be waiting eagerly for that.

One Response to “THE FUROR: “SERMON OF SLAUGHTER””