On the subject of songwriting, there’s also an effective synchronization of the lyrics and the music. The concept of the album is indeed WAR — in the air, on land, and in the sea — but the lyrics aren’t patriotic flag-wavers or celebrations of valor under fire. They’re vivid descriptions of devastation, bloodshed, and horror. The music captures those ideas just as vividly. 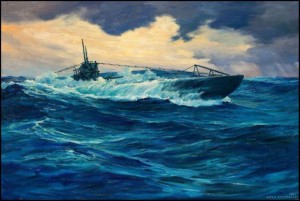 For example, the lyrics in “As Death Breaks the Surface” speak of “submerged tons of steel”, “running deep in the sea / hunting for its prey”, “sinking its torpedo teeth into steel / tearing the ships into shreds” — and you hear the ping of sonar and the kind of crawling, crushing music that makes it easy to imagine the underwater realm of submarine warfare. As another example, “The World Burning” describes the aftermath of conflict, with “countries set ablaze, one by one laid to waste” and “contaminated soil, useless forever more / slowly heaving in sickness, drowning in the blood of mother earth” — and you hear massive groaning riffs and guitar chords that sound like the tolling of bells in mourning for the earth’s destruction.

The second ingredient in the album’s success is the guitar tone and the production quality. That distinctive, highly distorted, chainsaw-on-steroids sound that bands like Carnage, Entombed, and Dismember employed to light a fire in the death metal scene decades ago is reproduced with affectionate faithfulness. And the sound of the album is just fuckin’ massive. When the guitars hit a chugging riff, it’s like a locomotive from hell. When they pound and smash, it’s a spine-shivering effect. When Biazzi blazes away in a tremolo-picked riff, it’s like a smoking bone-saw in overdrive.

And the third ingredient? The vocals. 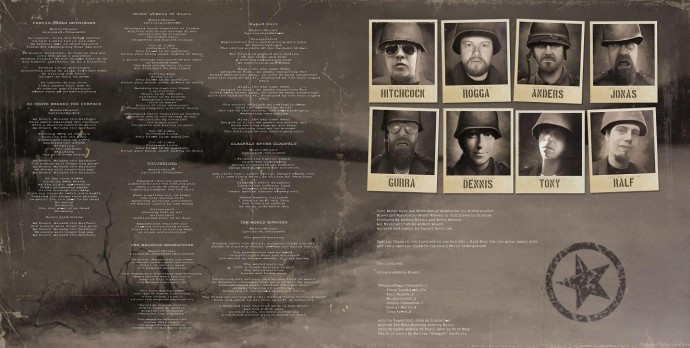 When this project began, Rogga Johansson was to be the vocalist and lyricist, but he and Biazzi decided to recruit others as well. In the end, seven vocalists with serious death metal cred contributed their talents to the album. I’ll list them here, along with the names of the tracks to which they contributed their horrifying roars. You’ll be hard-pressed to find another death metal album this year that equals this one in the raw, gruesome bestiality of the vocals; these dudes hold nothing back. Listening to the variations in the sound of their voices from song to song is also a kick.

You put these three ingredients together, and you have an album that no fan of old-school death metal should be without.

The album was mixed and mastered by Benny Moberg of Malfeitor (an outstanding band in its own right), and he also designed the booklet that comes with the digipak version of the album. The cover art was created by Daniel Devilish.

The album will be released on CD by Chaos Records on May 20 and can be pre-ordered here. It can be downloaded right now via the Bandcamp link below. Stream — and be steamrolled by — all the songs after the links.