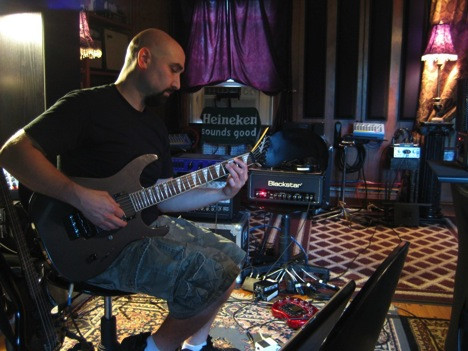 (In this post TheMadIsraeli begins what may become a continuing series on notable metal guitarists.)

I’ve outright stated and hinted at numerous other times that I’m a guitar player; even though my choice of instrument within the metal realm is pretty standard, that’s just the one that sucked me in.  I’ve always wanted to do a continuing feature on guitarists whose work I felt was extremely noteworthy, whether or not I was a fan of their work on a personal level.  It should be understandable, though, that I’m mostly gonna pick guitarists to write about who I’m into.  I figured that before reviewing Immolation’s new album, I’d start with someone who I believe has remained an anomaly in the death metal circuit: Robert Vigna of Immolation.

I’m pretty sure no one would disagree with me if I made the statement that as a riff writer, Vigna is just fucking weird.  Out of all of the fantastic guitar players of the 90’s death metal giants, Vigna is definitely the mad scientist of the bunch.  While other bands opted to be simply crushing, Immolation opted in the end to be very eerie, in a very earthy way.  Vigna’s guitar work is both a signature, and a vital component, of that sound.  I’ve heard the term “simple technicality” used to describe Gojira, but I would say that if any band best defined this term, it’s Immolation.

Vigna, of course, like so many musical geniuses, evolved from a place rather far removed from what he became known for.  Immolation’s first record was for the most part straight-up, fast-as-fuck, firebrand death metal, with only hints of the signature Immolation trudge-and-groove that would later become their hallmark.  As such, it didn’t leave a lot of room for what would later come to define Vigna’s playing, although Dawn of Possession definitely stood out nonetheless.  It wouldn’t be until the band’s sophomore album, Here in After, released a full FIVE YEARS LATER, that you’d be hearing a completely different band. 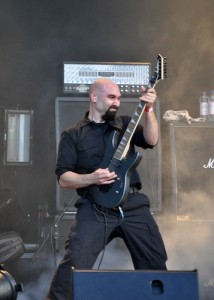 Vigna brings a lot of weirdness to the table. Not only are his note choices enigmatic in nature, but his “jumpy” style of guitar playing also really sets him apart.  He’s all over the place, leaping from low end to high end, creating a cacophonous storm of disorientation along with his liberal but patented use and placement of pinch harmonics (those are what the common man knows as the “squeals”), resulting in an attack that is less hard-hitting and more rope-a-dope; it wears you down.  I think this element of Immolation’s music is what keeps the fans coming back; because of Vigna’s style, there isn’t just an Immolation sound, there is an Immolation ethos you get lost in.  Of course the rest of the band are vital components, but Vigna is definitely one of the pillars of the band’s foundation.

Vigna has never really been a “technical” player, except for the fact that when he solos he can bust them out as good as, and usually better than, anyone. Instead, it’s his reckless abandon, his commitment to black metal depravity, doom metal trudge, and death metal dankness that have defined him as a stand-out guitarist in my eyes.  I just don’t see how someone listening to songs like “Swarms of Terror”, “Of Martyrs and Men”, or “Burn with Jesus” could deny that there is a presence in the music no other death metal band has.

Immolation have always been the master of the off-kilter, the disorienting, and the esoteric.  Vigna is the warlock behind it all.  Cheers to a man who is, in my mind, a death metal icon.  The songs below are what I think of as definitive examples of his style.