(On June 24 [July 2 in the U.S.], Peaceville Records will release The Headless Ritual, the second full-length album recorded by the legendary Autopsy since their revival in 2009. NCS supporter KevinP had the chance to conduct a wide-ranging interview with Autopsy’s co-founder Eric Cutler, and we’re proud to bring it to you right now.)

K:  Not that you’ve kept this a secret, but I’m not sure how many people actually know that you were diagnosed with Avascular Necrosis in 2008. The last update I saw (via Brooklyn Vegan in Dec 2012) was you had nearly recovered. Can you give us all any further update?

E:  Yep, I am healed and building up strength in my hip. A lot of physical therapy, swimming, and exercise!

K: This caused you to get 2 hip replacements over the years, correct?

K:  Any idea what caused or brought this on?

E:  We don’t know why, I don’t fit any of the criteria. They don’t know a lot about the disease, there are many things that can cause it. My son recently was diagnosed with it as well. His condition is not related to mine though. He has a disease called Legg-Calve Perthes. He will be having the first of at least two surgeries very soon. He is 6 years old and the news devastated my wife and I. 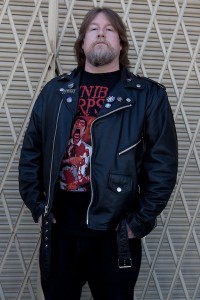 K:  Was there anything you learned from your ordeal that might help you going forward in your recovery and with your son’s?

E:  Mostly with how to limit the pain and how to build up strength after the surgery. There isn’t anything you can do to prevent it.

K:  Well, I wish you luck and hope your son gets through this okay. I’m a father of a 9 yr old and can’t imagine the mental fortitude it must take on a daily basis.

E:  Thank you. It is hard to deal with for sure.

K:  Let’s shift gears and talk some Autopsy.  The new album, The Headless Ritual, comes out on June 24th. Tell us about it.

E:  We think it is our best yet. Our goal was to crush Macabre Eternal and without a doubt we did that. It has a real horror feel to it. We made sure to make it a shorter length than Macabre as well. The one complaint we had on the last record was that it was too long! The Headless Ritual has artwork by Joe Petagno who is known for doing most of the covers for Motorhead.

K:  For what it’s worth, I didn’t find Macabre Eternal too long at all. That’s the equivalent of someone bitching about their orgasm being TOO pleasurable. LOL

K:  Besides what you just mentioned, was there anything fundamentally different this time around? Did you have to approach the songwriting or recording process any differently?

E:  We approach songwriting always the same. What sounds sick and brutal is the formula. I think we are going to sound like Autopsy no matter what we do. With this record I think we put a lot into it with a strong desire for it to be great. No bullshit, straight up death metal. 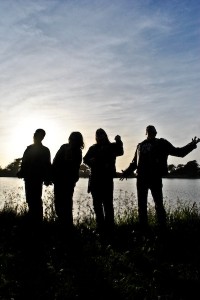 K:  Allow me to kiss your ass for a moment here.  Autopsy are one of those bands, whose albums I will buy without ever needing to hear a single note (the same goes for Bolt Thrower and Immolation). I know what I’m going to get and I don’t need the wheel reinvented.

E:  Thank you for the compliment. We would not do this if we couldn’t stay true to what this band is about. It is something we take pride in and we appreciate all the fans and friends who feel like you.

K:  As a fan I love that. But does it ever (in any capacity) feel limiting to you, as a musician?

E:  No, not really. I love this band and what we do, so it is easy to maintain the same style we have. I have other projects and starting to play some other stuff. Autopsy will always be Autopsy!!

K:  You mentioned the cover art on the new record, done by Joe Petagno (who needs no introduction). How did you hook up with him?

E:  He actually contacted us and asked if we needed some artwork. We were like “fuck yeah!”  If someone would have told me when I was a kid that someday Joe would do cover for my metal band, I would have told them to put the crack pipe down!

K:  What type of direction (if any) did you give him?

E:  Not much. We told him to spare no sickness. He has a great imagination as an artist

K:  I was about to get kinda jealous thinking he heard the album before most of us. LOL

E:  Haha, nope. He had the cover done long before we recorded it and before we had the title as well.

K:  So can you sorta say he helped formulate the album title? I mean, how could it have been called anything else?

E:  Well, with the cover we knew the title had to fit. Dennis Dread came up with the title. We had several ideas but nothing that really did it for us. Thanks Dennis! 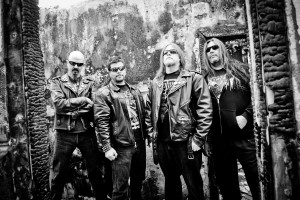 K:  So what lives dates do you have planned in support of the new record?

E:  Well, we are playing a couple shows with Bolt Thrower before the record comes out (May 25 & 26) and we will play in Seattle, Washington on July 13th. That is all we have planned for now. At this time circumstances at home prevent us from playing out as much as we would like. That could change in the future.

K:  I was gonna say, with the upswing in your health, that would open up more opportunities for ya, but the situation with your son takes precedence of course.

E:  Well, we won’t tour anyways because not everyone in the band wants to.  So we play festivals and one-offs. My son will take some time but not for long. His recovery should be good and of course I will be there for him before anything else.

K:  How much do I need to implore you to come to Florida (or at the very least), the Southeast? LOL

E:  I would love to! It is possible, we are talking about it now. No promises yet but hopefully this year we will make it.

K:  I won’t say you’ll make a grown man cry, but I would be so happy (understatement of the year). Last time I saw Autopsy was on the Acts of the Unspeakable tour (about 20 years ago)

I’ve seen your recent Facebook updates about another project you have going on, NECROSIC. I couldn’t find its own Facebook page and it’s not listed on Metal Archives yet. What can you divulge to us?

E:  It is new. A facebook page is coming soon, I am waiting for the logo to be done. We recorded our first song recently and will do more soon. We are looking to start playing shows as well as record a full-length record. It is brutal death metal of course, with some hip hop. Just kidding, no hip hop. That would really suck ass wouldn’t it?!? HA!

K:  How would you say this differs from Autopsy ?

E:  The writing is all done by me. I’m writing heavy ass music but not material I would use for Autopsy. You might hear a riff hear and there that is similar. But I write music for Autopsy too, so that is possible. The vocals sound nothing like Autopsy and the drums are Johnny’s own style, not like Chris Reifert. I will let you be the judge, I am posting a song shortly (this weekend)

K:  You releasing this yourself or have you found a label?

E:  No label yet. I recorded the first song myself on my own equipment. I will give it out to everyone soon and I hope to get some label interest and play some shows. I think it will do very well, it’s heavy as hell!

K:  Certainly looking forward to hearing it. Well, that’s all I got for ya. Thank you for taking the time to do this interview, thanks for keeping the Autopsy flame burning bright and not pussying out. And tell your son I’m rooting for him.

E:  Thanks Kevin, and all those reading my boring rubbish! You guys fuckin rule! Keep it sick! CHEERS

(The Headless Ritual is available for pre-order here.)

4 Responses to “AN NCS INTERVIEW: ERIC CUTLER OF AUTOPSY (and NECROSIC)”