(On June 24 [July 2 in the U.S.], Peaceville Records will release The Headless Ritual, the second full-length album recorded by the legendary Autopsy since their revival in 2009. NCS supporter KevinP had the chance to conduct a wide-ranging interview with Autopsy’s co-founder Eric Cutler, and we’re proud to bring it to you right now.)

K:  Not that you’ve kept this a secret, but I’m not sure how many people actually know that you were diagnosed with Avascular Necrosis in 2008. The last update I saw (via Brooklyn Vegan in Dec 2012) was you had nearly recovered. Can you give us all any further update?

E:  Yep, I am healed and building up strength in my hip. A lot of physical therapy, swimming, and exercise!

K: This caused you to get 2 hip replacements over the years, correct?

K:  Any idea what caused or brought this on?

E:  We don’t know why, I don’t fit any of the criteria. They don’t know a lot about the disease, there are many things that can cause it. My son recently was diagnosed with it as well. His condition is not related to mine though. He has a disease called Legg-Calve Perthes. He will be having the first of at least two surgeries very soon. He is 6 years old and the news devastated my wife and I. END_OF_DOCUMENT_TOKEN_TO_BE_REPLACED

The tour begins January 30 in Philadelphia and ends February 22 in New York City. The full schedule can be seen after the jump. And in case you missed our earlier post yesterday, Osmose Productions has just uploaded three older Enslaved albums for streaming and download on Bandcamp for the first time. END_OF_DOCUMENT_TOKEN_TO_BE_REPLACED 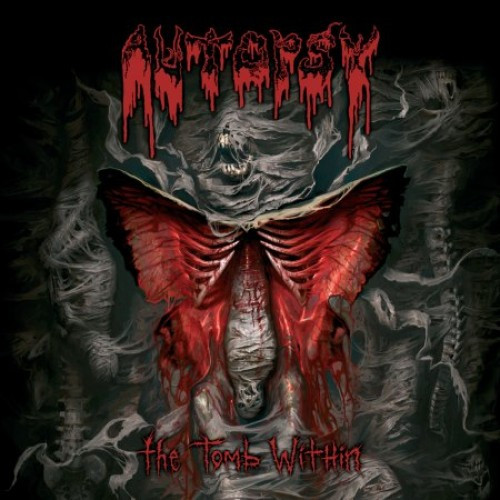 If you’re a death-metal freakazoid like me, then you need no introduction to Autopsy. But in case you’re not, how ’bout an introduction?

Autopsy was originally formed in 1987 by Chris Reifert and Eric Cutler, shortly after Reifert left the legendary band, Death. Danny Coralles joined Autopsy a year later, and after a couple of demos, they released their debut album Severed Survival in 1989. Three more influential albums followed, but Autopsy disbanded in 1995. Before its dissolution, Reifert and Coralles had begin a side project called Abscess, and that became their main musical vehicle in the many years that followed.

All sorts of death-metal icons, including Entombed, Cannibal Corpse, and Deicide, have named Autopsy as an influence on their music, and many more have covered Autopsy songs, including Immolation and Dismember. If there is a death-metal pantheon in hell, Autopsy reigns proudly within its smoking pillars.

So much for the history lesson. Fast forward now to June 3, 2010, the date on which Chris Reifert announced (a) that after 16 years of performing, Abscess had officially broken up, and (b) that Autopsy had been resurrected “to resume their mission of gore-soaked death metal brutality.” That cackling sound heard in the dark places underground on June 3 was the rejoicing of the hellish hordes at the rising again of Autopsy.

Now, fast-forward once more to October 5, 2010. On that day, Peaceville Records released an EP of brand new Autopsy music called The Tomb Within — five new songs, which we have now heard. Those hopes that burst to life on June 3 have been fulfilled: Autopsy has risen again in a display of monstrous death-metal glory.  (more after the jump . . .) END_OF_DOCUMENT_TOKEN_TO_BE_REPLACED