(Andy Synn reviews the new, self-titled album by Norway’s Blood Red Throne, which will be released May 25 by Sevared Records.)

I think even the members of Blood Red Throne would admit that their line-up over the years has been far from stable. Though core-member Daniel Olaisen (a/k/a Død) remains a consistent thread throughout their history, the band have by my count now had 4 vocalists, 3 guitarists (so only one change there, luckily), 2 bassists, and 5 drummers. That’s a lot of members.

Funny thing is, I don’t think the quality of their output has suffered in the slightest. There are albums I personally prefer, but you’d be hard pushed to argue that BRT have any weak links in their musical chain.

The group solidified a new permanent line-up in 2011, just after the recording of Brualitarian Regime, an album that featured the final recorded appearances of long-time vocalist Vald and original bassist Erlend Caspersen. However, although both Ivan Gujic (gutiars) and Emil Wiksten (drums) made their debuts on Brutalitarian Regime, new vocalist Yngve “Bolt” Christiansen and new bassist Ole Bent Madsen have, so far, only been introduced to the band’s fanbase via their appearances on the band’s many tour dates and live shows. So this is the first chance we’re all getting to hear the new iteration of the band as a recording entity, and to see what the newly redefined collective brings to the table. 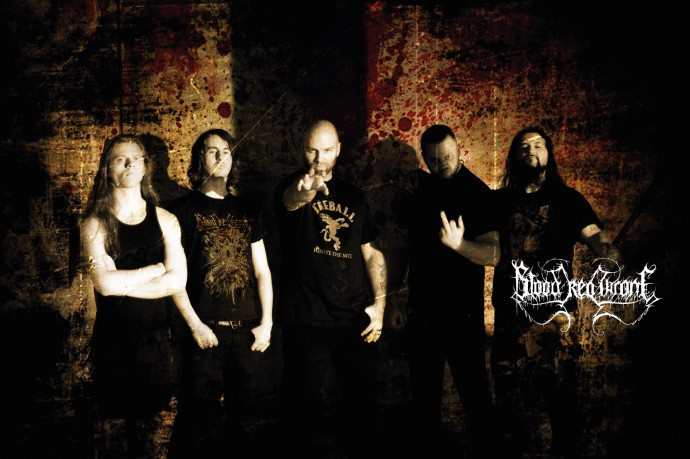 Self-titling the record is certainly a bold statement to make, right from the start. A self-titled record is a way of stamping out your identity and core sound, a defining moment. So the band must be feeling pretty confident that a) they’ve come together for the long haul, and b) that their whole is even greater than the sum of their parts.

And you know what? I’ve got to give it to them. This certainly earns the right to bear the title Blood Red Throne.

Marrying the demented aggression of Cannibal Corpse to the teeth-grinding groove of Pantera at their most abrasive, shot through with touches of subtly complex guitar work a la Death at their most focussed and hostile, BRT’s seventh full-length album captures every aspect of their sound in microcosm, while also being their shortest, most refined, record since 2003’s Affiliated With The Suffering.

There’s pretty much something for every death metal fan on this record. You want writhing guitar grooves and scything flurries of razor-sharp tremolo? Check out opener “Soulseller” then, which also introduces you to the grinding gutturals and ravening high screams of the band’s new vocalist, who (arguably) adds a more extreme edge to this side of the group’s sound.

How about a raw and bloody helping of bulldozing death metal, flavoured with subtle blackened anti-melody and touches of ominous, soft-spoken menace? That’s what you get with “In Hell I Roam”, matching jerky, neck-snapping violence with an array of cold and calculated hooks.

If you’re in the mood for a real crusher to break the ice with a new date, you might consider “Hymn Of The Asylum”. Twitchy shifts between pneumatic, pounding groove, frenzied blasts, and ear-scraping dissonance make this 3-minute bruiser an instant shot of hyper-adrenalised mayhem.

“Primitive Killing Machine” starts off like the aborted love-child of Cannibal Corpse and Pantera, its belligerent grinding rhythms encased in concrete and lined with pure snake venom, before unveiling a serial-killer’s taste in malevolent melody and a warlike, suitably primitive vocal hook.

If you’re still not satisfied then I’d recommend you check out the chugging, mechanised steel of “Deatholation”, one of the heaviest cuts on an album almost crushed by its own weighty sonic violence. Brutal riffage hammers away at you, drums shift between bone-shaking groove and skin-flaying blast-work, everything locked in like some monstrous murder machine.

Not a song to take home to meet your parents, the aural assault of “Torturewhore” pummels away with a combination of death metal dissonance and unerringly tight rhythmic shifts. Thrusting and pounding with savage, sexual force, it thrashes and burns, batters and bleeds, in an ugly copulation of turbo-industrial death metal drums, viper-like leads, and massive, throbbing riffs.

If you’re after something with a touch more melody at its heart, then “Exoneration Manifesto” is the song for you. It practically pulsates with oily, suppurating bass-lines, haunting leads and black/death hybrid tremolo parts. That said… damn, it’s heavy. The chug-heavy, elephantine riffs and taut, rippling bass-lines that make up the song’s low-end are just crushing.

For those of you busy corporate high flyers who don’t have time for anything but an immediate fix, the 2:58 sonic beatdown of “Dodens Makt” should fit like a well-tailored suit. Minimalistic, focussed, and bursting with primal aggression, it simply welds together a sequence of bone-breaking riffs and gut-wrenching kick-patterns, sprinkles a touch of dark lead melody on top, and unleashes it without restraint.

Finally, you might want to brace yourself for the unrepentant extremity and singular savagery of “March Of The Undying”, the album’s longest, most intricate, and probably best, song, without a doubt.  This one has it all, a predatory atmosphere, a thick, choking low-end, choppy, eardrum-rupturing riff-hammers, crazed, spiralling bass lines, and a pin-precision barrage of ferocious, devastating drums.

For all their extremity – and there are moments on this album where the mind-bending blast frenzy, the ravenous banshee howls, and the crushing meltdown riffage combine into an eruption of absolute face-melting extremity –  Blood Red Throne are a band with real character. That, along with their monstrous, inhuman tightness (and unbelievable ability to consume alcohol) is their key strength.

Masters of their trade, students of the game, kings among men. Bow down and worship before the Blood Red Throne.

The album can be ordered at the band’s Bandcamp page, at iTunes, and at Amazon. Below are an album teaser and the official video for “Primitive Killing Machine”.