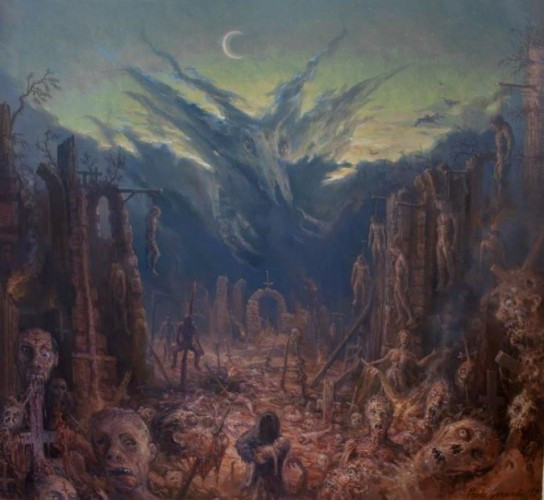 Mephorash are a black metal band from Uppsala, Sweden, with two albums to their credit, both released by Grom Records — Death Awakens (2011) and Chalice of Thagirion (2012). They’re about to add to those accomplishments through a split release with Philadelphia’s excellent Ashencult, entitled Opus Serpens, and today we’re premiering the Mephorash track for the split, “Atramentous Ungod Aspect”. The song features guest vocals by Acherontas V. Priest of the occult multinational band Acherontas. In addition to the music, we bring these words from Mephorash:

“Our hymn is the most deep and profund work Mephorash has done so far.
The song channels a lot of powers and elements never seen in the chalice of Mephorash before.

To help manifest our unrelenting forces we got support from Acherontas V. Priest from the great and powerful black metal band Acherontas.
He has added a lot of movement needed for manifesting the forces this song is providing.
The lyrical work of this song is a personal journey and aspect provided by our brother Endless, who is an important piece and mind in Mephorash.
His work in Mephorash has been the final piece making this song what it is. Achieving what we have been aiming for during the whole journey.
Thanks to all involved and special thanks to Ashencult for this mindblowing collaboration. 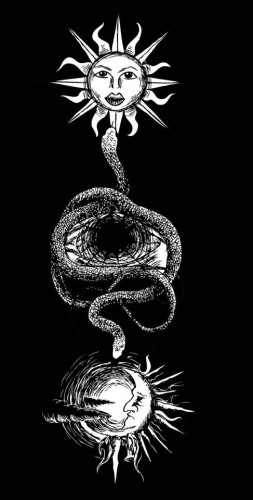 “Atramentous Ungod Aspect” does indeed begin like a solemn hymn, like a canticle voiced by a Tuvan throat-singer — and then the floodgates open to a rushing wall of racing guitars and thundering percussion, with raw, bleeding vocals. The song moves and changes, powered by bleak melodies that are both majestic and malignant, and accented by voices that are varied and dramatic. There is a ritualistic aspect to the music, but it’s also sweeping, powerful, and obliterating.

The Mephorash-Ashencult split will be released exclusively on vinyl and will feature the cover art of the wonderfully talented Paolo Girardi, which you can see at the top of this post. Information about how and where the split can be acquired will be forthcoming. Watch the pages linked below for further announcements. After those links . . . the song, AND the lyrics.

Pride! The edict of the fallen!
A bifurcated tongue caress tectonic plates
Hissing vibrations deep in the devils gorge
Earth and blood wed to stone in exhuberant, spiteful intent
May all the furies of time curse thee for my hunger remains unsated
Nachash, NChSh! A sacrosanct key to damn all that is false
Nachash, NChSh! A vial of cosmic venom to rend all reality apart!
Now come see the sun… the lances of annihilation, eight-fold devourer
See those mutilated, bereft and vainglorious…
Shrouded in mars, madness and scorn garbed in darkest desolation
A scepter and disc held aloft beneath a sanguine sphere
A circlet made to worship a harlots guise!
Basilisk, with thine sight I am remade, spectre of tunnels manifold
Qoph, lamed, phe, tau! All thine secrets now to unfold!
From fiery chains of upheaval, manacles of flesh-born inadequacy
From the dust of death an acolyte rose
Amidst timeless currents, flies and rot equalizes all