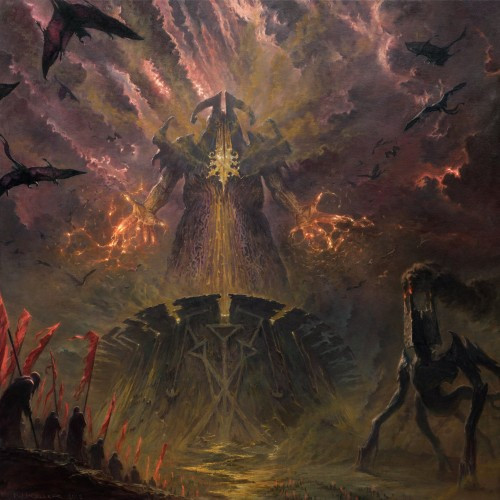 Deep down at the filthy core of all good brutal slamming death metal are riffs — atonal, palm-muted monstrosities that produce a visceral, physical effect, the kind that get your guts churning. Effective vomit vocals are important, too. You want them cavern-deep and gruesome; you may or may not want them to sound like a mess of puffed-up bullfrogs competing for sex on a wet night. A healthy serving of percussive obliteration, you want plenty of that, too.

You get all of that in Empires of Great Enslavement, the new EP by Sweden’s Vomitous. But you get more, too. To begin, you have the brilliant cover art by one of our favorite metal artists, New Zealand’s Nick Keller. We featured the cover in one of our daily artwork posts at the NCS Facebook page back in March and have been looking forward to the music it would house ever since.

Empires encompasses six tracks, one of which is a short, atmospheric introduction and two of which appeared on a 2012 demo. The band tend to launch the songs with a barrage of sonic obliteration, all rapid-fire riffing and thundering drums. But the music is rhythmically dynamic, sometimes slowing into massive, skull-caving slam segments, the most convulsive of which occurs in “On the Column of Insignificance”, and sometimes exploding in a flurry of jabbing, pneumatic riffage (as in “Infectious Urethral Re-Leakage”).

The songs are also occasionally spiced with squealing pinch harmonics (“Atrocities of Unspeakable Magnitude”), grisly tremolo leads (“Scorched Earth Apocalypse”), or even the kind of groaning, fret-sliding chords that remind me of what Gojira has popularized (“Scorched Earth”, again). And kudos for the distorted vocal sample at the end of the title track, an excerpt from Lovecraft’s eloquently frightening poem “Nemesis”.

The vocals by Andy Tseung (and bassist Gustav Trodin on the title track) are indeed gruesome and guttural, though rarely getting into frog-croak territory (which for me is a plus). The drumming is also quite good, with recently-departed hitter Hebert Alarcon Cerna focusing on low-end thunder rather than the snare-heavy attack that other brutal death bands often favor.

But, as usual, the quality of this kind of metal ultimately depends on the magnitude of the riffs, and guitarists Mikha’el Bergström and Christian Lundgren have brought some deliciously vicious ones to the table. They’re physically galvanizing, they never grow monotonous, and they’ll call you back for repeat listens.

Empires of Great Enslavement should be instantly appealing to fans of brutal slam, but it’s the kind of release that fans of death metal in general ought to check out, too. It’s now available for streaming and digital download on Bandcamp (here), and a CD is expected from Permeated Records. Visit Vomitous on Facebook HERE, and listen to Empires below.