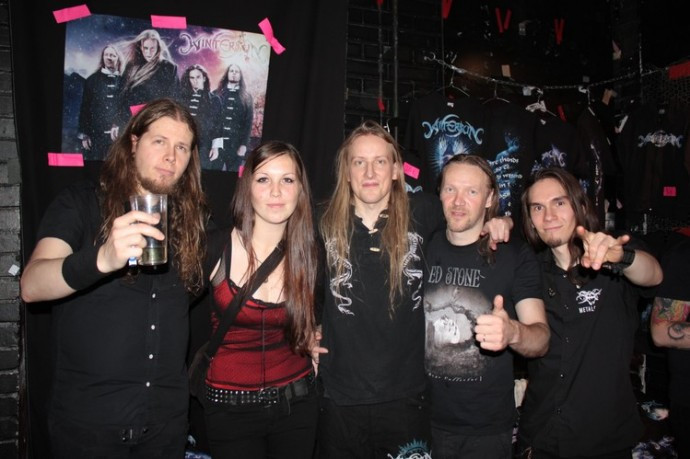 (Hungarian student of the Finnish language Andrea Balogh, with Wintersun.)

I don’t know about you, but I usually enjoy reading about metal in mainstream publications, sometimes for the humor in seeing writers (who may not know what they’re talking about) trying to describe metal to the masses, and sometimes simply from the experience of seeing our world through the eyes of outsiders. The latest example came this morning in — of all places — The Wall Street Journal, that rightward-leaning, well-written, journalistic bastion of American corporate capitalism. But the article is worth reading not only for the usual reasons described above, but also because it describes a phenomenon that seems to be more widespread than I knew.

The subject of the article is a trend — well, “trend” may be an exaggeration — of people outside Scandinavia being drawn by metal to learn Finnish, Norwegian, and Swedish. It begins with a story about an American international relations major at the University of Washington here in Seattle named Michael Brown. His career aspirations are in the foreign service, and he’s studying the Finnish language — but not necessarily because it will be a useful language in his projected profession:

“It was heavy metal, unmistakably,” Mr. Brown said when asked what inspired him to pursue a language spoken by a nation that has fewer people, at 5.4 million, than Washington state. Finnish bands perform with a “dark woodsy resonance” that he has come to love, he says, and “the poetic and obscure nature of the Finnish tongue really gave it a unique wave.”

The article goes on to describe the apparent propensity of Italian metalheads to study Norwegian in school:

“It’s quite a well-known phenomenon that students in Italy study Norwegian because they’re interested in metal,” [Prof. Siri] Nergaard said. Irene Burdese, currently teaching Norwegian to 92 people in Turin, and Milan-based Kristian Bjornsen, who is also teaching the language to Italians, both say Norway’s unique brand of “black metal”—a darker blend of thick beats and sometimes-Satanic themes—is a big inspiration.

The article quotes Ensiferum bassist Sami Hinkka and refers to such bands as Tyr, Manegarm, Moonsorrow, Apocalyptica, Stratovarius, Children of Bodom, and Wintersun. It observes that “the Norwegian Foreign Ministry gives its trainees a seminar in black metal due to the litany of requests embassies get about it.” And, given the fun I always have with Google Translate’s slaughtering of the Finnish language, I enjoyed these passages, too:

Whereas Norwegian black metal is generally sung in the native tongue, Finnish metal—ranging from a softer “love metal” to heavier versions of “death metal”—is often performed in English. So it may seem odd that fans want to actually learn a language with words as lengthy and difficult to pronounce as jäätelöbaari (ice cream parlor), valkopäämerikotka (bald eagle) or aseleponeuvottelutoimikunta (a single compound word that efficiently expresses the same thing as “the working group for cease-fire negotiations” in English).

Norwegian has some long words too, such as fylkestrafikksikkerhetsutvalgssekretariatslederfunksjonene, a not-commonly used word meaning a county’s traffic security committee’s leader’s functions. Engstelige toner is Norwegian for “anxious notes,” referring to music, and ansiktsmaling means face paint. Some words are the same as in English; headbanging is called headbanging in Norwegian too.

10 Responses to “HEAVIBÄNDI IN THE WALL STREET JOURNAL”