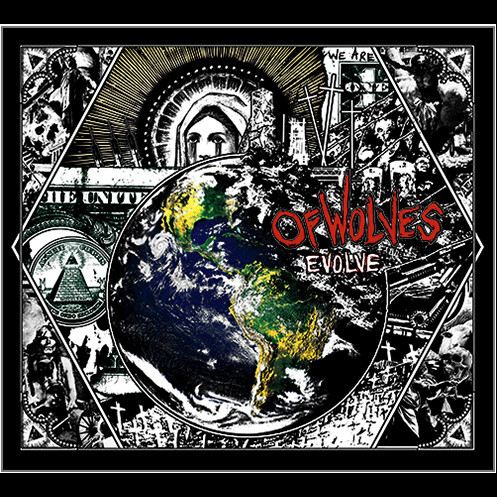 The first time I listened to Evolve by Chicago’s Of Wolves I had more “what the fuck?” moments than I’ve experienced with any other album this year. I listened to it as the band wants it to be heard — straight through, letting each song run right into the next one. It was a breathtaking (and breathless experience), with something unexpected lying in wait around every corner, and with more corners than a roller-coaster ride.

Apparently, the therapy consists of taking a whole kitchen sink’s worth of musical influences and interests and letting them spill out in a flood of exuberant creativity. 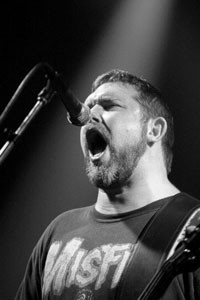 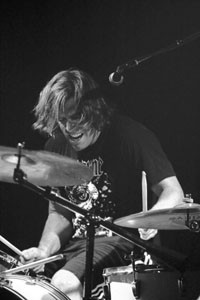 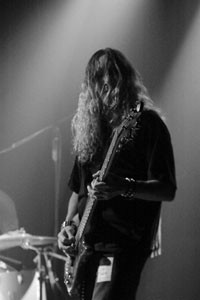 There’s a heavy dose of old-school, catchy-as-fuck punk rock chords in the music, especially in early tracks such as “Dead Wait” and “Moot Point”, but even those songs include some vicious, beefy, clobbering, headbang-worthy riffs that throw a bunch of crust grit into the fray.

The third song, “No Loss For Words”, deals out a lot of pulsating, rumbling bass, and an eruption of squalling guitar noise and a screaming solo — and it ultimately devolves into the clammer of voices and busy noise that you might hear at a train station or crowded airport.

But as schizoid as the music proves to be up to that point, you still won’t be prepared for “The Man” (which is actually the first part of what seems like a trilogy of songs that includes “Red Skins” and “Buffalo Nickles”). It serves up a brittle backwoods melody, with mandolin picking, the thumping of a hide drum, and wailing vocals that bring an Appalachian atmosphere to the proceedings.

And then “Red Skins” mixes up some old-school heavy metal chugging, while “Buffalo Nickels” is a mid-paced offering of staggering, skull-crushing riffs and lumbering bass pierced by bursts of hallucinatory lead guitar. How would you expect Of Wolves would follow that? With a 7-second grindcore explosion (“Shit Sandwich”). 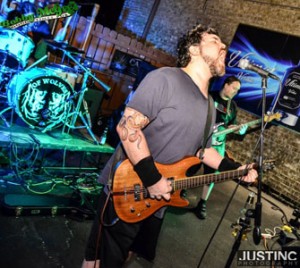 And what next? How about some old-school garage rock in “Legal Lies”, which eventually staggers into a down-tempo change with stoner-style riffs and a psychedelic guitar solo, only to erupt in a flurry of drum strikes and a distorted guitar buzzing like a horde of flies, finished off with a bunch of skittering feedback. “Seal the Deal” follows that with a load of heavy grinding and monster riffs that open up like bursts of machine-gun fire.

The album’s penultimate song has no title, just an extended elipsis. And anyway, what would you call a cacophony of chaotic, scrambled samples stitched together over a kind of rushing noise in the background?

There is one secret track on the album. It’s the last song. It’s called “Secret Track”. Subdued acoustic guitar melody. A reverberating guitar sound that resembles the warble of a mellotron. A dog barking. What did you expect?

Well, I don’t usually write track-by-track reviews, but can you see why I did it this time? There might be some way to sum up this album without paying attention to each song, but I’m afraid something would be lost in the encapsulating. It’s crazy, it’s righteous, it’s utterly original, it defies classification.

It’s also not for everyone, that’s for damned sure. And perhaps the most challenging part of this listen are the vocals. They’re all over the place, but usually what you’ll hear are high, yelping, barking proclamations — plus hardcore howls, demented screams, crazed chanting, and a bit of baying at the moon. I told you this was pissed-off music. It’s therapy-by-catharsis, and that definitely comes through in the vocals.

I ought to just stop now and let you listen and decide for yourselves if this connects with you as it has with me. First, Of Wolves have created two videos, one that combines “Red Skins” and “Buffalo Nickels” into a single song (here) and this one for “Moot Point”, which is a genuine head trip, both visually and musically:

If you’re still with me, then check out the whole album below. Amazingly, it’s a name-your-price download at Bandcamp — and with the download you’ll get a PDF of a fascinating booklet with lyrics and crazy artwork. For Five Bucks at Bandcamp, you can also order this thing on CD, which comes with a disk that has spot lamination and custom cardboard packaging along with that 12-page booklet.