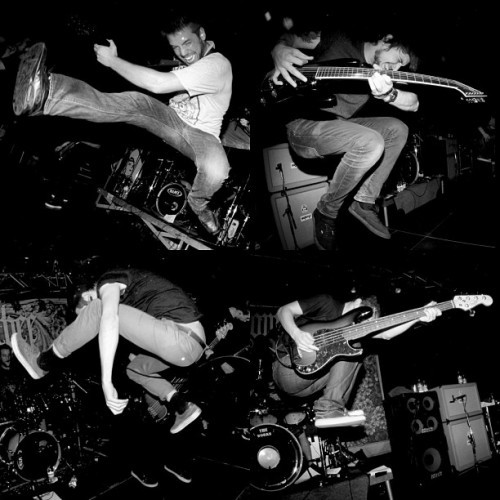 Hell-raising Friday nights bring apocalyptic Saturday mornings, and so it is that on this Saturday morning my ass is dragging through the wreckage I made of my life. I’ll probably feel normal by about sundown, if I’m lucky. I do have some things our other writers sent me overnight, but the words are all blurry at the moment. While I wait for my eyes to focus, I’m going to give you a video to watch and a song to hear, to pass the time in a pleasant way.

The video is brand new and comes from a Swiss band named Promethee. The song is named “Life/Less” and appears on their debut album, Nothing happens, Nobody comes, Nobody goes. The music is a mantic, frantic burst of melodic, metallic hardcore. It includes a lot of frenzied, spastic guitar exercises, but the notes ring out in chiming waves almost as often as they give your head a good shake to see what might come out of its orifices. And in the mid-section Promethee settle into a groove that will get your head slamming something fierce (or at least that’s what happened to me, which may explain why printed words look kinda blurry at the moment). Also, vein-bursting vocals and a bass guitar that gets a moment to shine near the end.

But regardless of how you might react to the music, the visual part of this video is worth watching all by itself. It was filmed in black and white, with the band in silhouette against a white screen most of the time, and it has a cool kaleidoscopic quality (along with other eye-catching visual effects).   Also, a really pretty woman.

High fives to Renaud Kritzinger, who produced and directed this marvelous video — which you can see below.