Let’s get one thing out of the way up-front: The new Deeds of Flesh album Portals To Canaan is a bewilderingly complex tech-death masterpiece. As a demonstration of pure physical speed and dexterity married to voracious brutality, it’s difficult to imagine any other release surpassing it this year.

The songs are one explosion after another of intricate instrumental extravagance: jabbing, darting riffs; swarming melodic leads; jackhammer bass rhythms; bursts of noodling notes and frenzied arpeggios that fly by almost too fast to follow; blistering reverberant solos; unorthodox rhythms; blinding, blasting drumwork. It’s as if the musicians were juiced up on exotic accelerants delivered from another star system when they laid down these tracks.

The music will no doubt spawn different mental images in different listeners, but for me I imagined an army of alien machines fabricating some immense incomprehensible structure in deep space, a thousand gleaming entities performing a thousand tasks at light speed according to perplexing blueprints drawn by monolithic sentient devices with computing power beyond the understanding of mere mortals: Vast frameworks lashed together by writhing metallic tentacles, tangles of wires threaded by nanobots into almost indecipherable patterns, titanium girders slammed into place and joined by explosive welders. 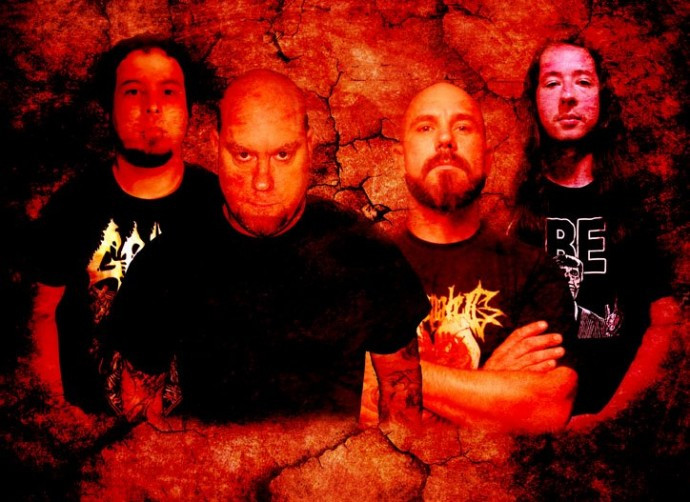 The alien, futuristic aura of the music isn’t attributable entirely to the high speed and head-spinning complexity of the songs or the machine precision of the performances. It’s enhanced by such things as the eerie, spacey, languid guitar leads that float through the nail-gunning riffs and machine-gun percussion of songs such as “Amidst the Ruins” and “Entranced In Decades of Psychedelic Sleep”. In other places, you’ll hear weird croaking/skittering robotic noises or the otherworldliness of ambient synths.

There are periodic interludes that also underscore the sci-fi orientation of the music, in addition to providing momentary (but still disorienting) breaks from the high-octane pace of everything else. The first one comes in the extended introduction to the album’s fourth track, “Celestial Serpents”. It’s a layering of strange noises, like signals from space pulsating over groaning, growling, bass-register noise. The second is an instrumental track named “Caelum Hirundines Terra / The Sky Swallows the Earth”, a collage of discordant electronic sounds and ambient keyboards over a militaristic drum pattern, increasing in tempo and intensity until it becomes a cold roar.

But these interludes are relatively brief. They provide little pause from the hurtling, annihilating onslaught of notes and beats which is the meat and potatoes of Deeds of Flesh. There is a risk with this kind of music that an album’s worth of almost relentless speed and complexity will numb the listener’s mind, with all the frantic fretwork producing (counterintuitively) a kind of monotony, and ultimately a lack of memorability. But over the course of about 18 years and nine albums of development, Deeds of Flesh have reached a state of songwriting prowess that largely avoids that risk. 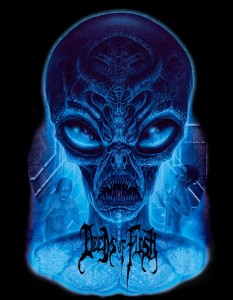 There are structures in the songs that give you something to hold onto, patterns that repeat themselves, motifs that emerge in the frenzy and linger in the mind, space-faring melodies that contrast with all the jackhammer propulsion. Big, low-tuned hammer blows segment the insanity, and there are moments (particularly at the end of “Xeno-Virus” and the title track) when the band settle into repeating rhythmic and melodic patterns that last almost long enough to become hypnotic. Yes, I’ll put this out there and stand by it: It turns out that there’s almost as much progressive intent and avant garde flair in the album as there is head-whipping, flesh-eating brutality.

Though all the songs are strong, not all of them are equally successful in avoiding the risks identified above. For me, the standouts are those tracks where the patterns in the music (and the melodies) are closest to the surface, such as “Amidst the Ruins”, “Xeno-Virus”, and the title track. I also really enjoyed the one cover song on the album, which happens to be the album closer — Gorguts’ “Orphans of Sickness”.

Portals To Canaan is both an exhausting and an exhilarating experience, almost too much to take in at one sitting but so riveting in its macabre achievements that its gravitational field will pull you back in. For fans of technical death metal who enjoy getting their brains scrambled while their bodies are being beaten to a pulp, Portals To Canaan is not to be missed.

In the vocal department, it seems that Lindmark and Peters share the duties, and between them they contribute a steady flow of harsh, deep, barking vocals — gone are the high-end shrieks that appeared in previous albums.

The production is clean and “modern”, which in my view is almost a necessity for this kind of intricate metal. Without it, you would miss a lot of the fascinating complexity that’s really the hallmark of this album.

Portals To Canaan will be released on both CD and vinyl by Unique Leader on June 25, and pre-orders for the album and related merch are now being fielded here. You’ve already seen Raymond Swanland’s CD cover at the top of this post. Below you can check out his artwork for the LP, followed by the advance tracks “Amidst the Ruins” and “Rise of the Virvum Juggernaut”. 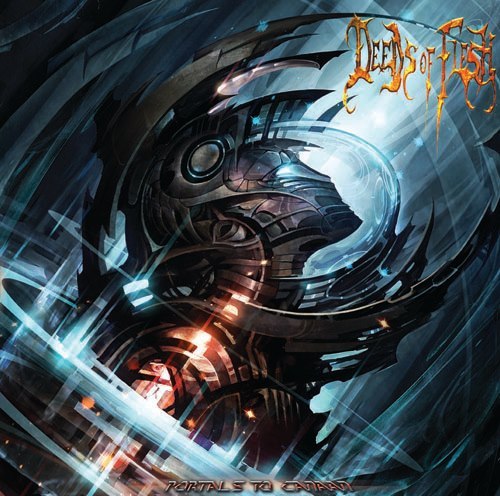 4 Responses to “DEEDS OF FLESH: “PORTALS TO CANAAN””