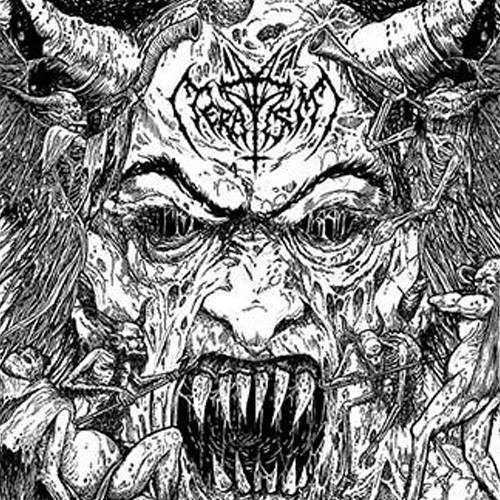 Mark Riddick’s cover art for Teratism’s new MLP La Bas tells you something of what you need to know about the music: It is, in many respects, far out on the frontier of bestial extremity, dwelling in a poisonous landscape where demonic entities howl for the manifestation of the Adversary. Yet there are depths in this musical inferno, and the more you listen, the more you discover of its otherworldly dimensions.

The vocals are the most challenging aspect of the music, yet they are also a vital ingredient in the occult atmospheres that La Bas generates. In a word, they’re horrifying. V. Wrath delivers a series of distorted incantations, condemnations, and satanic proclamations that range from roars to shrieks to cracked, whispered chants. Often, the vocals are layered, producing harmonies that invoke sensations of bedlam. Whether agonizing, despairing, or furious, the ferocity of his delivery is convincing evidence that Teratism have indeed opened a fearsome channel to hellish realms.

Much of the accompanying music is also ferocious, with distorted, swarming guitars and blasting drums generating a dense cloud of evil noise, perhaps most intense and overpowering in the EP’s relentless third track, “Thy Swill Be Dung”. But La Bas isn’t thrashing black metal; it is instead mainly devoted to the creation of bleak, damned atmospherics. “Shadows Flee the Burning Sons of Light” becomes dirge-like and doomed, a miasma of contagion, soaked in illness, and “Gospel of the Heliophobe” splices its whirlwind of cacophony with moments of crawling malevolence. 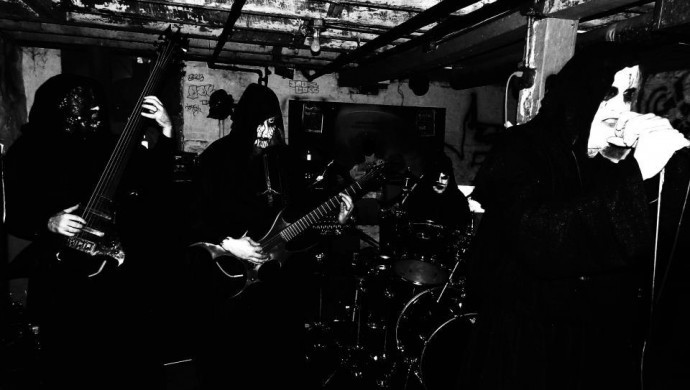 I mentioned that there are depths in this Devil’s music. Dark, minor-key melodies infiltrate the pandemonium, sometimes moving deep within the music, sometimes surfacing in rippling tremolo chords, like infernal balalaikas. The changing drum rhythms and progressions are also worth noticing, but they become more noticeable on subsequent listens than on an initial run through the songs, because they’re not pushed forward in the mix.

The EP’s closing track “Come To the Sabbat” is worth special mention, because it’s a departure in style from the first three songs. It’s a cover of an occult psychedelic rock song released by the British band Black Widow in 1970. The song has been covered by other bands, but not like Teratism do it. They’ve preserved the repeated pounding of the toms in a kind of tribal-style ritual, but replaced the flute and vocal harmonies with layered guitar and bass chords that at first made me think of venomous bagpipes. And while the song’s catchy melody has also been preserved, V Wrath’s rancid version of the song’s central chant injects the track with an air of palpable evil.

The recordings on the EP are not recent, though they’re only now being released. Teratism recorded the Black Widow cover in November 2006 and the other three songs in June 2009. They are working on the release of new songs via a fifth album (The Second Death) that should come our way before the end of 2013, and you can get a taste of that here. But La Bas is a noteworthy addition to the discography of an uncompromising US black metal band whose devotion to the dark arts is no game.

La Bas is a vinyl-only release and can be ordered from Negativity Records at this location. I have the vinyl package, and it’s something to see. If you think Mark Riddick’s cover is frightening at the size you see in this review, then imagine seeing it at 12 1/4″ x 12 1/4″. And that’s just the starter. The vinyl package also includes a different piece of Riddick art on a 16″ x 23 1/2″ poster, a large 12-page illustrated booklet that includes the lyrics, and of course the vinyl itself — which was molded in a black-and-white “splatter” pattern. Very fuckin’ sweet.

Here’s a photo of the package, followed by a larger version of Mark Riddick’s artwork for the cover: 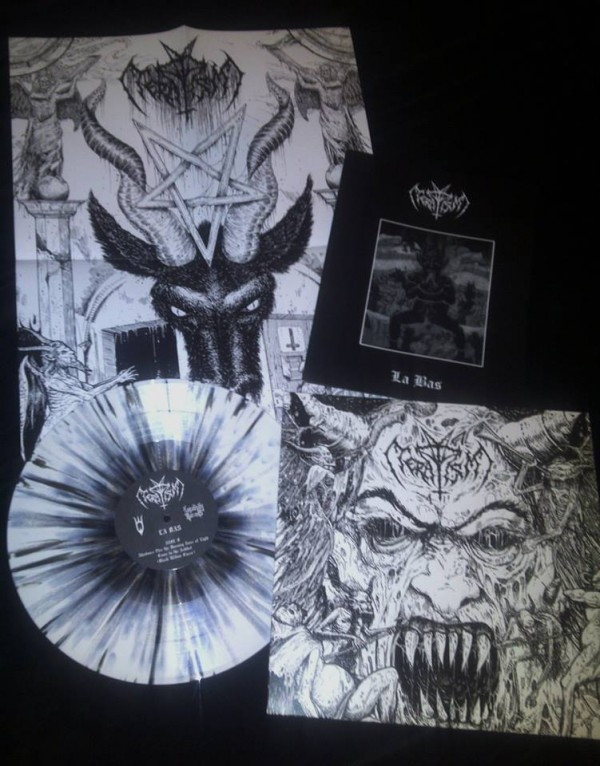 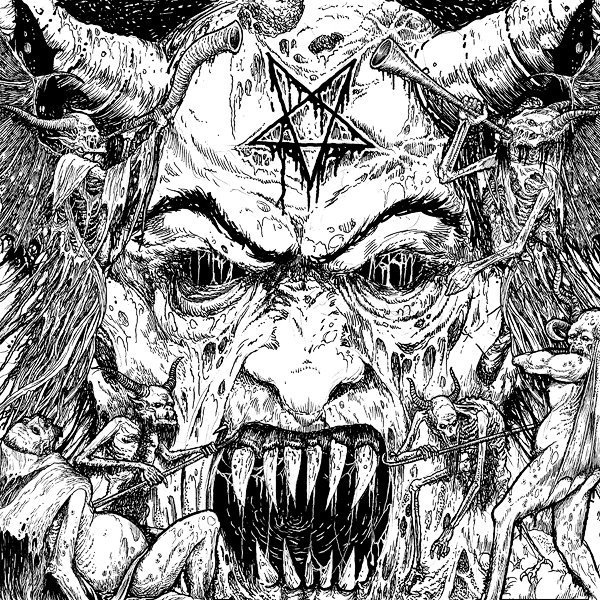