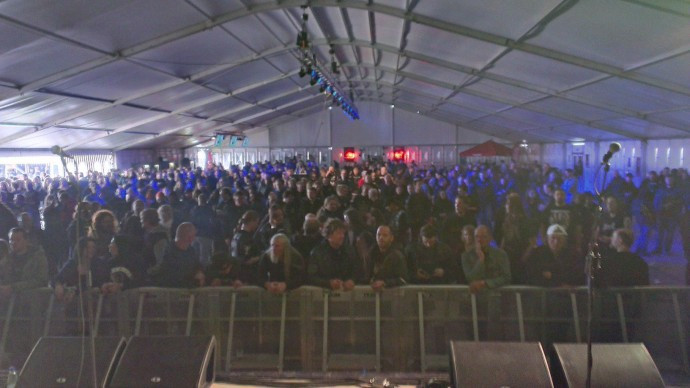 If you know of a death metal band other than The Monolith Deathcult who have used the Scottish folk song “Donald, where’s your trousers?” as the intro music for a live set, please speak up. I can’t imagine anyone else doing it. But that’s what TMDC did at the beginning of their performance on June 22, 2013, at the DOKK’EM OPEN AIR festival in The Netherlands.

Of course, they didn’t use the funny, up-tempo version of the song recorded by Andy Stewart. They used the slow, creepy version sung by machine intelligences in an episode of Terminator: The Sarah Connor Chronicles. As expected, the voice of Optimus Prime makes a later appearance as well.

But as interesting (and fitting) as these oddities were, the stars of the show were THE 6TH MOST POPVLAR AND ALMOST AWARD-WINNING SVPREME AVANTGARDE DEATH METAL BAND FROM KAMPEN, THE NETHERLANDS. And man, did they crush. How do I know? Because TMDC have uploaded a quality video of the entire set to YouTube.

The audio quality is so good that it sounds like it was recorded off the sound board (along with an audience mic). And although the video was shot with a stationary camera at the rear of the venue, you get a good vista of the light show, which was extravagant. All in all, this is a very cool (and very decimating) thing to hear and see.

The set list for the show was a mix of new songs from 2013’s Tetragrammaton album and older songs. The songs are identified in the video itself, but here’s the list:

And here’s the video.  Since I had to do the research to figure out what was being played as the intro and where it came from, I’m also including the fuckin’ footage from The Sarah Connor Chronicles.

3 Responses to “THE MONOLITH DEATHCULT: LIVE AT DOKK’EM OPEN AIR”