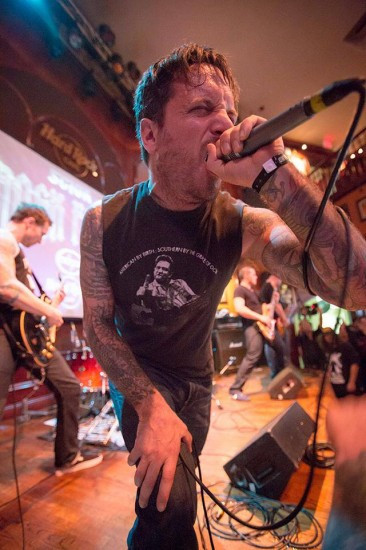 This edition of the “Five of my favourite…” column should be pretty self-explanatory. For those of you unaware, I’m currently in two bands here in the UK, a high-velocity technical/melodic death metal band called Bloodguard, and a slower, doomier melancholic death metal band called Twilight’s Embrace. So, stemming somewhat from the recent clamor over “Five albums that changed your life”, I thought it might be interesting to list five of the frontmen who inspired me to pick up the microphone myself.

Now, to be clear, these aren’t necessarily the frontmen/singers I count as my current influences as a vocalist (there’s little to no correlation between some of their vocal styles and the way I sing today), but they are the ones who I looked up to and who made me want to be like them.

One of my early loves, I actually only got to see V.O.D. live for the first time earlier this year. Thank god it lived up to my long-gestating expectations. Tim Williams (above) is an absolute ball of barely contained fury onstage, a mix of frustrated repression and calculated rage, with a voice that simply bleeds passion. You can tell he means every word that passes from his tortured throat.

AFI singer Davey Havok is a taut spitfire of a frontman, a contorted, limb-flailing ball of energy, gifted with an absolutely massive voice capable of both fantastic vocal operatics and throat-shredding hardcore screams. He’s got personality to spare, and a talent for imbuing both his voice and his onstage antics with a mix of drama and integrity. The man’s connection to the crowd is second to none as well.

Ok, maybe I was hasty in the preceding entry. Because there are few frontmen out there who can equal Satyr’s absolute and unwavering command of a crowd. Like a masterful conductor he’s able to sway and direct a crowd’s attention and response with a wave of his arm, inspiring fervent, howling loyalty and screaming awe in equal measure. From the moment he struts onstage there’s simply no question that Satyr Wongraven is the man in charge. A true master.

You may have noticed that what unites all my choices is a mix of evocative showmanship and undeniable passion. Each of these singers has a distinctive, striking voice, as well as a physical style and approach all their own. That doesn’t mean they’re always comfortable onstage though – at his worst Caputo often performed with his back to the audience due to a combination of nerves and vulnerability. At his best though… the man’s voice and confident showmanship inspired absolute and unequivocal devotion from the band’s fans.

Another frontman who appears oddly uncomfortable and ill at ease between songs, yet turns into a whirling dervish as soon as the music kicks in, Darkest Hour’s own master of ceremonies John Henry has never once let me down live. Self-effacing and humble to a fault, his raw and ragged vocals are dredged up from somewhere deep down inside and delivered with an undeniable ferocity. The very first time I saw DH live I was hooked and it’s become my mission to follow in this man’s footsteps.

28 Responses to “FIVE OF MY FAVOURITE . . . INSPIRATIONAL FRONTMEN”