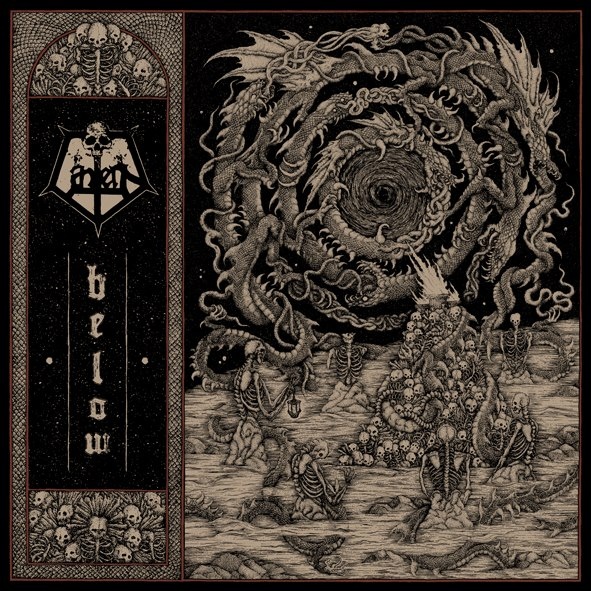 (In this post TheMadIsraeli reviews the new album by Finland’s Lantern. The album is out now on the Dark Descent label.)

Lantern are a discovery who I have to say surprise and bewilder me with their sound.  Equal parts early Napalm Death, early Emperor, and Celtic Frost, the resulting sound is badass in all of its off-kilter bestiality.  The inclusion of a mix intentionally made to resemble late 80’s demo work makes it even stranger, yet it fits their sound perfectly.  All in all, I’m surprised I haven’t heard more talk of these guys considering their three previous releases (two demos and an EP).  I haven’t heard any of those previous releases; this album is my first exposure.

Those influences I listed?  This really is an attempt to merge all those sounds together.  The result is something that is chaotic, yet melancholic and alien.  The strange riffs hybridize the styles (there are no specifically identifiable death metal riffs, black metal riffs, or anything else of the sort going on here) and the vocals are insanely primitive, the production only applying a minimum degree of dirtying, amounting to something like a caveman grunt or roar.  Vocalist Necrophilos comes off as something of a more raw, more open-sounding Barney Greenway back in Napalm Death’s early 90’s days.

The instrumental work, all provided by second member Cruciatus, boasts its own personal flare.  His riffs, as I said, hybridize death, black, thrash, and doom metal, all to astonishing effect, while his drum work has an impeccably old school feel to it.  Blast beats fall in and out of sync; as a matter of fact, the drums are always on the verge of derailing when the music speeds up, which brings a nice chaotic touch. When the slower pieces come, his drumming takes on a commanding simplicity that marches forth with agonized perseverance.

The music of Lantern is really, at its core, an esoteric roar from a cavernous abyss.  The howling whirlwind of rage reeks of misanthropy.  I just really fucking like this shit.  I suppose in part it’s my tendency toward the old school.  Below hooks me with the production, the old school loose drum performance, the primitive vocal style, and all of it jerks on my nostalgia chains. Yet Lantern take old elements and bring them into refreshing synthesis.  They have an obvious love for what they’re doing, and it really radiates from the crafting of this album in every aspect.

Astonishing album, really.  I highly recommend that you check it out, buy it, and give these guys as much PR as possible, because I want more of this stuff.  There will be a stream of the album below.