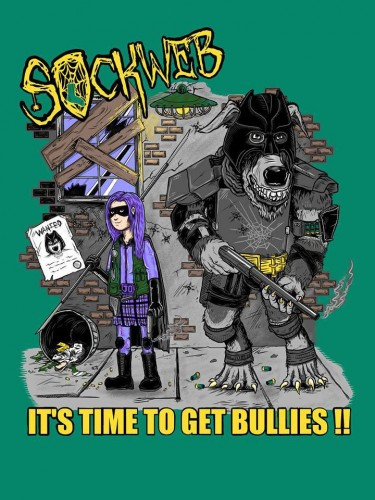 Relatively speaking, I’ve been a late-comer to the marvels of Sockweb, a father/daughter duo who have been recording some punishing grind and are on the verge of releasing their debut album Werewolf via Monolithic Records. But though I may be late to the party, I’ve definitely had my eyes (and ears) opened: Adam “Blackula” Young churns out some decimating riffs and drum blasts, and 7-year-old Joanie “Bologna” Young delivers raw, sandpaper-abraded howls that will make the hair stand up on the back of your neck (how someone this young and this cute can vocalize with such no-holds-barred extremity still blows my mind). Not only that, but Joanie writes all the lyrics herself (Werewolf chronicles her friendship with a werewolf she found hiding from a storm under her bed).

Today, Sockweb announced the launch of an Indiegogo campaign, which is designed to help fund manufacturing of a bunch of extras to accompany the album’s digital release on August 6. As these things typically work, contributions to the Sockweb indigogo will essentially be pre-orders for future merchandise, including CDs, limited-edition shirts (like the one pictured above) and socks, and signed posters.

In addition to all that merch, donors will be offered hand-written lyric sheets and the chance to have a song written about you or a subject of your choice (pending parental approval) for the next release. And if the campaign goes well, there may be some vinyl in our future, too.

The band have set a fund-raising goal of $5,000. If they don’t reach the target, they plan to prioritize production of the most popular items first, and then finance the others through sales of the album. “Also,” in the band’s words, “as a side-effect, Joanie’s soul will wither and we’ll be forced to subsist on a diet of cardboard and gritz.” Yeah, I suppose that could be understood as a form of emotional blackmail, but it sure as hell worked on me.

You can see all the donor options and make pledge at this location.

If you haven’t yet seen or heard what Sockweb is all about, I recommend you check out the following two update videos. The first one just went up on the band’s Indiegogo page. Both include snippets of as-yet unreleased songs. And below the videos you’ll find full versions of the four songs that have debuted to date.