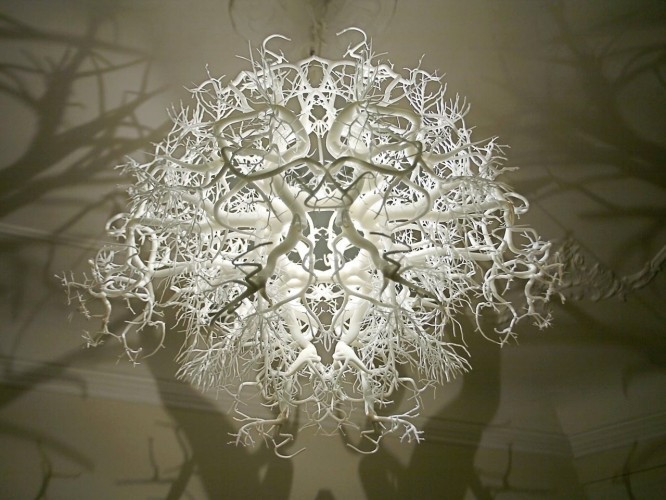 Welcome to another edition of THAT’S METAL!, in which we collect images, videos, and occasionally news items that we think are metal, even though they’re not music. Today, we have seven items for your entertainment and edification.

This is really going to be more than one item, but all with a common source. The creators are two artists, Thyra Hilden from Denmark and Pio Diaz (originally from Argentina) who have collaborated on a variety of unusual works. The first is shown in the photo above. It’s a light sculpture called Forms In Nature. When the brightness of the light source inside the sculpture is intensified, it casts shadows on ceilings and walls that resemble a riotous forest and its root system — embodying “the notion of a real world versus an underworld.”

The sculpture itself is beautiful, but the effects it creates are equally dazzling. Hilden and Diaz are actually creating more of these light sculptures for sale. Would be very cool to have one in a room in your abode, don’t you think? Right after the jump there’s one more still photo plus a video demonstrating the effect. But this is just the first of the Hilden-Diaz works I’m going to show you. 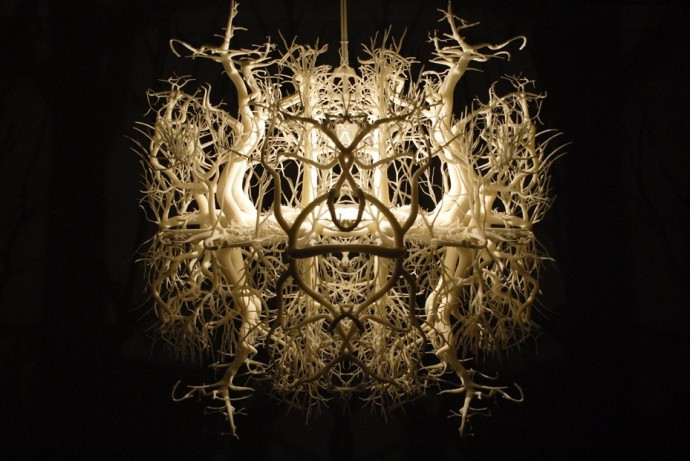 Here’s another Hilden-Diaz creation. This one is called Venus of Willendorf. It was installed in the Ørestad High School in Denmark. I think I would have had trouble concentrating on my school work if a giant ever-lactating breast had been hanging in my high school. As if anything like this could ever be installed in a high school in ‘Murrica. 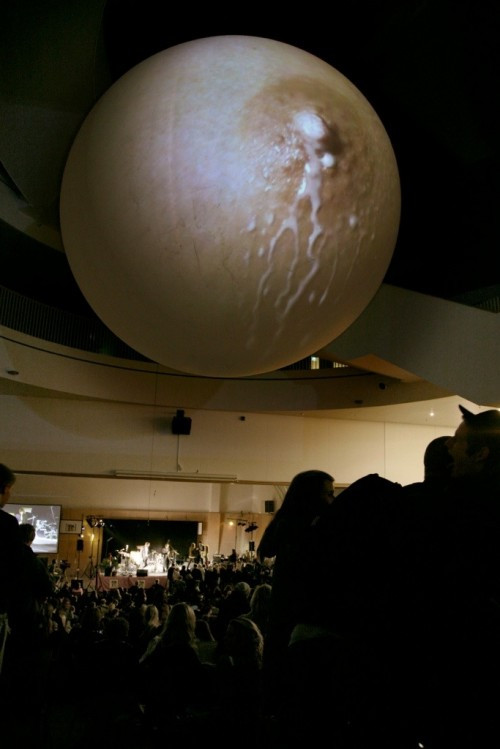 This next creation is the Blood Trophy, which the artists made from polymers — and mixed human blood. 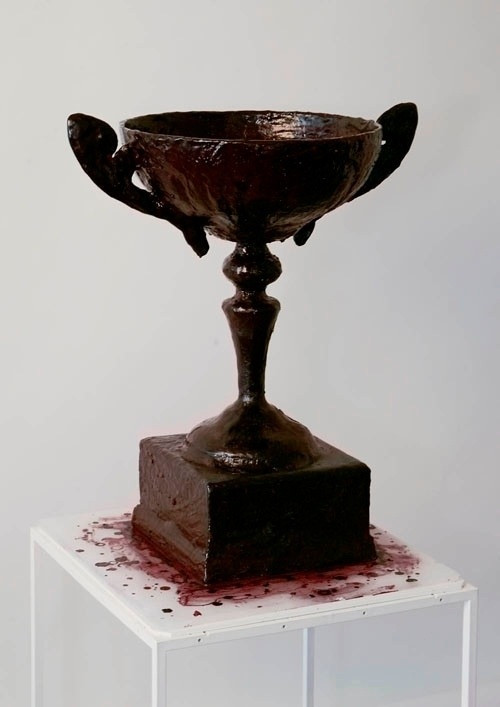 But as eye-catching as these works are, Hilden and Diaz are best known for an ongoing series of installations called City on Fire. Using enormous projectors, they create the illusion of famous landmarks and other manmade structures burning in great conflagrations. Photos of a few of the installations are below, followed by two videos — one of them showing the ARoS Aarhus Art Museum in Denmark “on fire”, and the second showing the Coliseum in Rome “burning”. I think you’ll figure out pretty fast why this is metal. 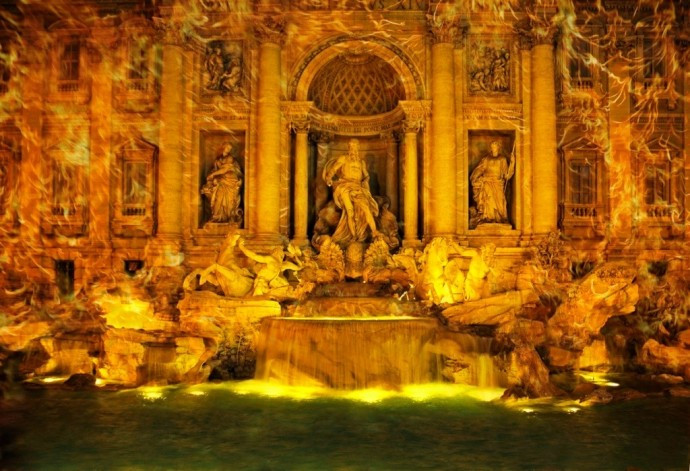 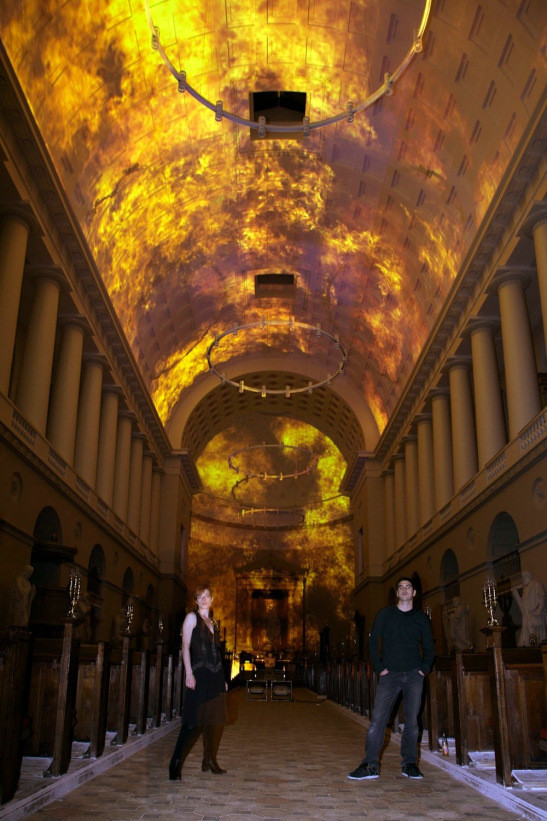 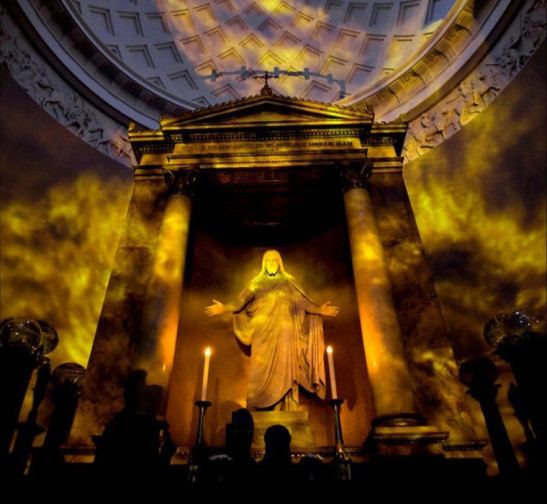 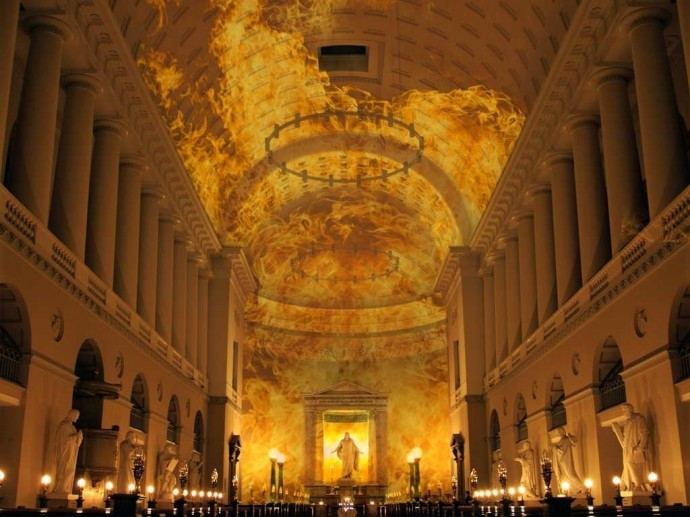 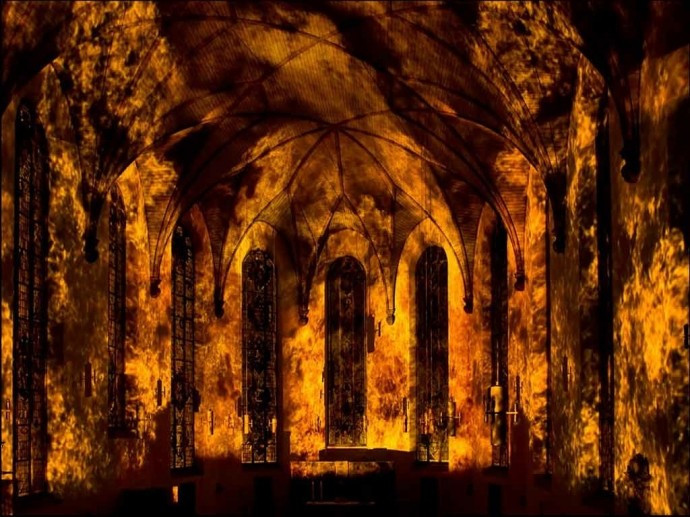 For more information about Hilden-Diaz and to see other works they’ve created, go HERE.

(thanks to Raven S. for turning me onto this dynamic duo) 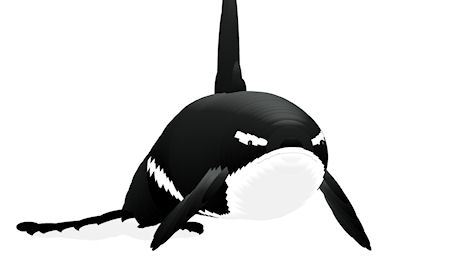 It goes without saying that orcas are metal. I commute between where I live and where I work by ferry boat, and a few times a year I get to see pods of orcas on the Puget Sound crossing. But now I get to play with them whenever I want . . . and so can you. Just go HERE and watch the orca follow your mouse pointer around.

There’s an inverse relationship between the amount of time you spend doing this and your IQ. If you do it for more than a minute, then you’ll know you’re down in my range.

Since we’re on the subject of sea life, we might as well stay there. This next item falls into the category of Nature Is Weird And Ugly And Scary As Shit, which of course is why it’s metal. It’s a video of a goblin shark. In case you think this is photoshopped, because everything is photoshopped nowadays, there really is such a thing as a goblin shark. It’s a rare species of deep-sea shark, sometimes referred to as a “living fossil” because the species is estimated to be 125 million years old. More info here.

(thanks again to Raven S. for the link to that monstrosity) 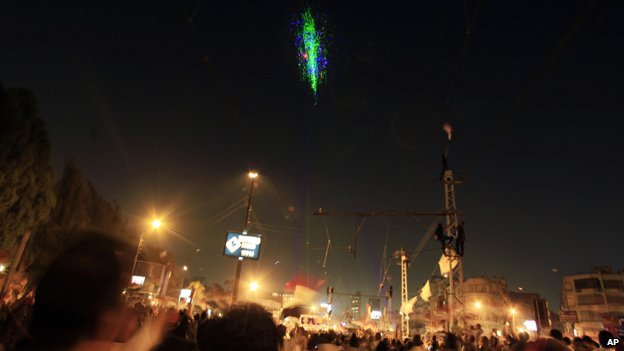 In 2011, a popular revolution toppled Egyptian President Hosni Mubarak and led to the first democratic election of an Egyptian leader — Mohamed Morsy of the Muslim Brotherhood. He didn’t last long. On July 3, following massive popular protests against Morsy, the Egyptian military ousted him and has now appointed opposition leader (and Nobel prize winner) Mohamed ElBaradei as Egypt’s interim prime minister. I have no fucking clue whether this turn of events will turn out to be better or worse for most Egyptians than having Morsy remaining in power. But that’s not the point of this item.

The point of this item was the mass appearance of green laser pens among the huge crowds that filled Tahrir Square in the Center of Cairo during and fter the protests. According to this July 4 report, “The mostly green beams of light were seen illuminating military helicopters as they flew over the square a few days ago. . . . The crowd erupted into cheers when the helicopters flew overhead, suggesting that the light show was a form of celebration, given the military’s role in overthrowing the president.”

Here’s a photo of BBC Middle East editor Jeremy Bowen being highlighted by the green light of laser pens during a live report from the square. 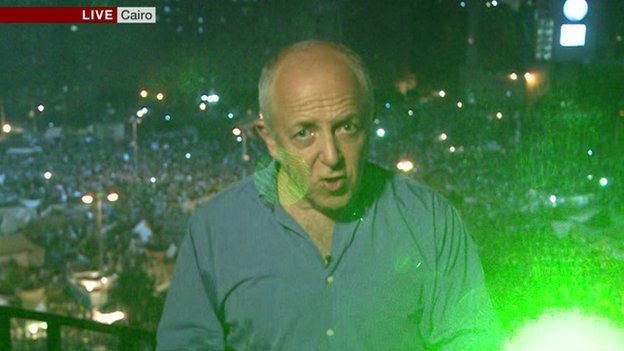 Here’s video of the crowd’s laser lights painting one of the helicopters. I can’t articulate why I think this is metal, but I do:

(credit to Phro for that last item)

The next item is video from July 2 showing the spectacular failed launch of a Russian Proton-M rocket carrying a spacecraft.  The writer of the excellent blog where I found this posted it “not for the ‘fireworks’ or the ‘fail’ aspect, but for the delay (10 full seconds) between impact and the arrival of the sound wave.”

I, on the other hand, am posting it because of the epic explosion, and for the whimpering and cursing that follows it — y’know, because this is a fuckin’ metal blog.

Human ingenuity is an amazing, and often batshit crazy, aspect of our species. Don’t try this at home, unless of course you have a helicopter at home, in which case try the shit out of it.

I was kind of hoping to see a stray hiker being cut in half, but I thought dangling a bunch of rapidly rotating saws from a helicopter and cutting up shit right next to some power lines was pretty metal even without gore.

And that brings me to our final item for today. By way of introduction, Joe McNally is a photographer — a photographer with really large brass cojones. This is a video of Joe getting an extra-good vantage point for some photos at the top of the world’s largest building, the Burj Khalifa in Dubai. Unless you have absolutely no fear of heights, this will make your stomach flip.

And that’s it. As always, enjoy the rest of your fucking day.