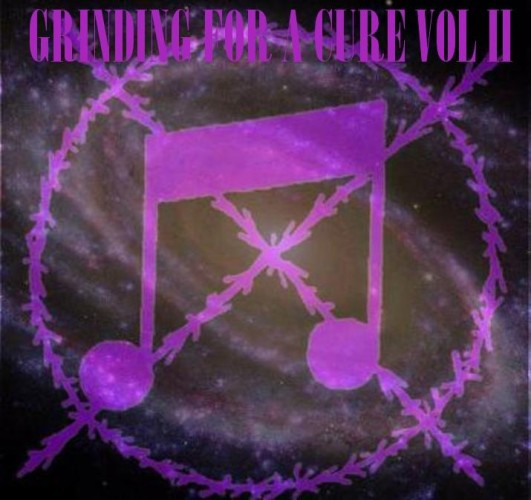 I’m going to repeat some of the back story about “Grinding for a Cure” that I described (here) back in February, for those of you who have forgotten and for new readers. It’s a project that started small and has truly exploded. The organizers set up shop and started spreading the word about their mission only in mid-January of this year — and their mission was to raise money to fund research into a cure for Alzheimer’s disease by selling a grindcore compilation. In a surprisingly short amount of time, they assembled a genuinely impressive line-up of bands and released a 100-track Volume I comp, which is still available here. The compilation was assembled by Dorian Rainwater of Noisear, Christine Coz, and Chris Messina of Swamp Gas.

Even as that comp was being released, the organizers had a bunch of other songs already in hand for a follow-up, and more have been coming in since then. Yesterday, they released Volume II for download on Bandcamp. Although they still have 10 more submissions coming their way, Volume II as it now stands includes 90 songs from 90 bands from all over the world. And the music isn’t limited to grind, though that’s the dominant style of music that’s represented. I’m just going to mention the names of some of the bands we’ve written about at NCS (from memory), and even this abbreviated list will give you an indication about the range and quality of the music on offer:

I’ll repeat something else I wrote when Volume I came out, because it’s still true: Alzheimer’s has become such a widespread disease that I suspect most people reading this know someone in their family or in the families of friends who has been struck by it. It has affected my own family directly, and one of my mentors in work and life is fighting it now. It’s a horrible affliction, and trying to find a way of stopping it is an extremely worthy cause. Being able to help financially while getting a motherload of good metal at the same time really is a win-win opportunity.

To find out more about the “Grinding for a Cure” project, visit them on Facebook here. To buy Volume II of the comp — for $10 or more — visit the project’s Bandcamp page at this location:

4 Responses to “GRINDING FOR A CURE: VOLUME 2”