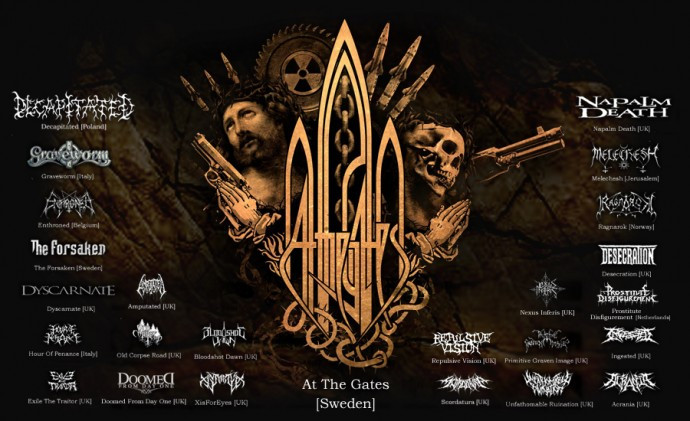 In mid-April I discovered (and wrote about) the announcement of an independent UK metal extravaganza called THE NORTHERN DARKNESS FESTIVAL scheduled to occur on December 8, 2013, in the town of Newcastle on Tyne in England. Back then, 10 bands had been scheduled to perform — and it was a truly eye-catching line-up. But the line-up has grown and become even more eye-popping. Check this out (click it to make it bigger):

What did I tell you? Awesome, huh?

Now, here’s the plug part of this post: The festival organizers have reserved one spot in the line-up for an unsigned band, and they’ve been running a contest to determine which band will fill that slot. They invited bands to submit music, and once a week for the last 7 weeks they’ve matched groups of them up against each other for fan voting. Seven semi-finalists have been selected so far, and the Group 8 voting has now begun — and NCS writer Andy Synn’s band Bloodguard is in that group.

Here’s how the voting works. You go to THIS PAGE, and you get the chance to listen to songs from each of the bands in Group 8, including a demo version of Bloodguard’s song “Footsteps (Of the Dead)”. You listen to the songs, and then you pick one of them to “like” — you will need to register for a Soundcloud account to do that, but registration is easy.

But don’t dawdle: The Group 8 voting ends on July 12. The winner (which I selfishly hope will be Bloodguard) will join the other weekly champions in a semi-final competition.

To get more information about this stunning festival, including info about how to acquire tickets, go to one of these pages:

Also, this post gives me an excuse to feature a play-through video of the song that Bloodguard submitted for the Northern Darkness contest.  Check it out:

8 Responses to “THE NORTHERN DARKNESS FESTIVAL: AN UPDATE (AND A PLUG)”