However, about a year later, word surfaced that three of Lifelover’s former members — vocalist/guitarist “( )” (Kim Carlsson), guitarist “H” (Henrik Huldtgren), and bassplayer Fix — had decided to start a new band. The band’s name is Kall (Swedish for “cold”), and yesterday I discovered that Kall has released a song from a forthcoming EP. The song’s name is “Då, nu – Jag och Du”, which according to Google Translate means “Then, Now — Me and You”.

It’s as difficult to classify as much of what Lifelover recorded, and in fact the song sounds very much like a Lifelover track — though by comparison to the last album the production on this song isn’t as clean, as sharp-edged, or as heavy, and of course the piano is gone. It blends the lightness of a catchy, up-tempo indie-rock-style melody and rhythm with the darkness of squalling guitars and Carlsson’s harsh vocals (which range from grim muttering to anguished, reverberating howls). The lyrics are in Swedish, so I’m missing what they contribute to the song’s beautiful but unsettling atmosphere. I hope to find out — but the song as it stands has hooked me already.

Just three days ago we reported about a new album of thrashtastic cover songs being recorded by Byzantine’s Chris Ojeda and his Black Cap Miner project, with help from a heavyweight line-up of guests, including Testament’s Chuck Billy, James Malone from Arsis, former Megadeth guitarist Chris Poland, Kyle Thomas of Trouble, Jay Hannon from Gizmachi, and Byzantine bandmate Tony Rohrbaugh. The album is entitled The Formative Years, and it’s due in September.

Black Cap Miner established an Indiegogo campaign to raise $1,000 to help fund the album — and in only 5 days they achieved that goal. Some people obviously know a good thing when they see it. But you can still contribute, because contributions will basically be pre-orders for the album and related merch.

Yesterday, Black Cap Miner released a stream of the first single from the new album — a cover of “World In A World”, originally recorded by Bay Area thrashers Vio-lence, and this cover features some guest shredding by the one person whose name I saved back from that list — Allegaeon’s flamethrower, Greg Burgess. The song is a heavyweight ass-kicker and a sure-fire mosh-trigger. I’m also digging the raw, gritty vocals as well as some nice little touches (a brief bass solo and the punch of the double-bass near the end). Check it out: 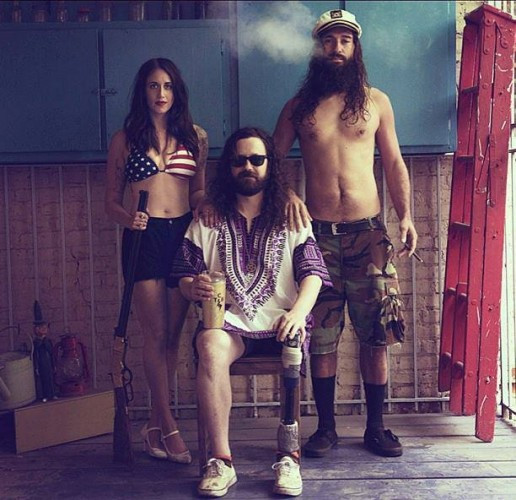 Blackout are a relatively new band from Brooklyn consisting of Christian Gordy (vocalist/guitarist), Taryn Waldman (drums), and Justin Sherrell (bass/vocals). They’ve recorded a debut album named We Are Here and have recently put three of the six tracks up on Bandcamp as a taster. They taste really fuckin’ good.

The music unites radioactive, sludgy, magnetic riffs; drumming that you can feel down in the bone marrow; and wailing psychedelic vocals that caused the hair on my arms to stand up. The songs’ pacing never accelerates faster than a strenuous lurch, and sometimes it positively crawls, but man, it will get your head banging somethin’ fierce.

Both murderously heavy and narcotic as an opium cloud, Blackout are churning out some tarry stoner/sludge that will stick to your skin (and in your head). They’re also a colorful looking cast of characters, don’t you think?

Check out their three teaser tracks below. I don’t know when the album is coming out. Hope it’s soon, ‘cuz I could use some more of this. 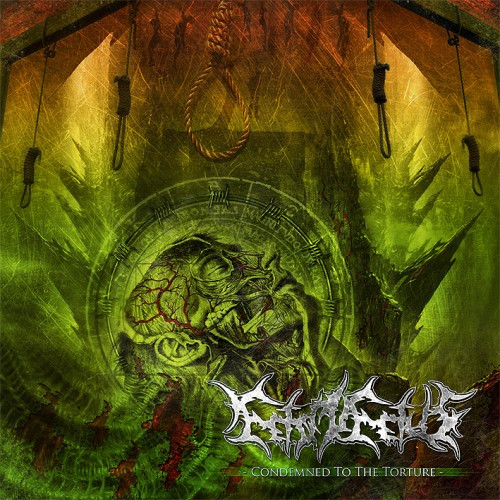 Feto In Fetus are a Polish band who are nearing the release of their second full-length album, an 18-track behemoth entitled Condemned To the Torture. Earlier this week they began streaming one of the new songs on Bandcamp, and I checked it out yesterday. The track is called “Source of Evil”, and holy shit, it’s a full-throttle battle tank with groove. Seriously, the riffs are immediately galvanizing and heavy as concrete, the vocals are deep and gruesome, and the drum beats are . . . actually kind of funky. More please.

If you’re looking for some bestial death/grind that will give your neck muscles a workout, this sounds like a very promising tease.

Condemned To Torture can be pre-ordered via the following links; the Feto In Fetus Facebook page is here; and “Source of Evil” can be streamed below.