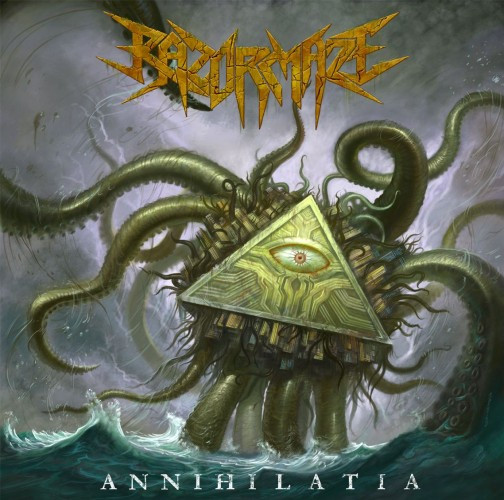 The “re-thrash” movement has been pronounced dead and gone by more than one observer, and it’s hard to argue with the proposition that the the vast majority of thrash revival bands who glutted the market over the last decade produced little more than formulaic music with some nostalgic appeal but no staying power. The bands who succeeded in capturing the imagination of fans, and who are still vibrantly with us, were the ones who bucked the trend by building something original and interesting on top of a thrash foundation — bands such as Vektor, Skeletonwitch, and Revocation. Now it’s time to add another name to that select list: Boston’s Razormaze.

With their forthcoming album Annihilatia, Razormaze have supercharged the thrash engine in ways that call to mind what their fellow Bostonians Revocation have accomplished — by extravagantly packing their songs with complex, head-spinning riffs and solos and interweaving elements of melodic death metal, groove, and even prog into the mix. The result is music that succeeds in being technically impressive and thoroughly interesting without sacrificing the blood-pumping speed and aggression of the thrash roots from which it grew.

Today we’re stoked to bring you our exclusive premiere of a new song from Annihilatia — “Something Like A War” — along with an interview of the band that we hope you’ll find as interesting as the music.

Annihilatia is scheduled for release on July 16 by the Irish label Slaney Records and is now available for pre-order at this location. It will also be available digitally through iTunes and Bandcamp.

Following the links below you can let “Something Like A War” (plus two other previously released songs from the album) romp through your head while you check out the interview, which includes details about the album’s killer cover art and production. After the interview we’ve also got the full schedule of a month-long tour Razormaze is about to begin in support of the album.

From what I’ve read, I gather that Razormaze started life as a pretty straight-ahead thrash band, but there’s a lot more going on in the new album.  The music will speak for itself, of course, but how would you describe the band’s musical evolution and the current direction of the songs you’ve recorded for ANNIHILATIA?

We definitely began with a much more raw, bare bones sound but tinges of our now more progressive nature were definitely present then. With Annihilatia, we’ve stepped outside our thrash-only template in a way we never have before. Less fucks were given on this album about adhering to a genre or label. The result is a more well rounded, interesting, patient, heavy and well constructed Razormaze.

How did these changes of direction come about?

As said, with this release, we’ve made a conscious decision to allow ourselves to stray from a traditional thrash sound and explore avenues we never would have before. You can definitely hear some elements like blast beats and guttural vocals that wouldn’t quite fit in past releases but that compliment the tracks on Annihilatia quite well.

There’s a ton of groove in the music, but there’s definitely a lot more complexity and technical flourish in the guitar performances and song structures than in more traditional thrash.  Could you describe the songwriting process that was used for this album?

We wrote this album the same way we’ve written all our material: by workshopping the fuck out of it. We all have our particular tastes in metal and music in general and they all play a part in Razormaze. Mainly, one of us will bring a riff or section of music to practice. We build on it, destroy it, build it again, yell at each other, hate each other, then love each other again. Once we have something that we can all agree is awesome, that’s a Razormaze song. The groove we’ve injected, while very present, is definitely another relatively new element for us but one that felt pretty natural.

At least to my admittedly damaged ears, the album sounds really, really good.  Who was involved in the studio engineering and the mixing/mastering?

Pete Rutcho at Damage Studios was the Mastermind behind nearly all of our production. He served as engineer, mix engineer and performed our mastering. We chose Pete because of his work with like-minded pals such as Revocation and Havok. He’s got a talent for taking bands with a basis in a more traditional sound and making them sound huge, ripping and modern. He did exactly that for us.

The album has been several years in the making, and I know there was a successful Kickstarter project along the way to help finance the recording.  Are you relieved that the album is about to be out?

You have no idea! As impatient as our fans are, we are ever more impatient. To have these tracks for so long and not be able to share them drove us fucking insane. It’s about goddamn time people heard this shit and we focus on our next batch of music.

I guess it’s true that these days there are more opportunities for DIY bands to make a go of it than there used to be, with financing vehicles like Kickstarter and Indiegogo, the opportunities to market through social media, and distribution platforms like Bandcamp.  But you guys made a conscious decision to search for label support instead of self-releasing, even though that delayed the album’s release.  Why did you decide to go that route?

We felt that a label would provide us with opportunities and attention we wouldn’t have naturally received with a DIY release. While Slaney certainly offers some of that for us, they are mainly serving to manufacture and distribute our album. We still have a lot of freedom, and thus massive responsibility to see most aspects of the release through ourselves. It’s daunting, but the control of DIY’ing has always suited us.

Kind of a related by broader question:  what would you say are the biggest challenges facing a newer band?  You guys have been at this for about 5 years, with ANNIHILATIA being the second album, so I suspect you’ve got some perspective on that now.

As stated above, garnering attention and recognition in a sea of bands, both signed and unsigned, shitty and un-shitty often feels impossible. This is ever more difficult when playing a genre that’s widely looked upon by the greater metal community as tired and overdone. Even as a band that’s toured consistently, it’s tough to get that spotlight. Sophomore full lengths are generally considered an important register of the improvement a band made since their laying down their initial sound. We think Annihilatia will prove we’re getting better and better.

I’m the kind of metal fan for whom album art is still important, even for digital-only releases, and the ANNIHLATIA cover by Andrei Bouzikovis (Cannabis Corpse, Skeletonwitch, Municipal Waste) is kickass.  How did you hook up with him, and how did the design of the artwork evolve?

It was as easy as googling Andrei’s name and finding his email on his website. I didn’t expect him to even answer us but he was super prompt and his final product was well beyond our expectations. The concept for the album art was pretty simple: take two sweet things (the eye of providence and Cthulu) and epically hybridize them. Sometimes cool shit is as easy as that, though it couldn’t have been made possible without Andrei’s talents.

Well, you can never go wrong with Cthulhu.  One more nuts-and-bolts kind of question. You’re about to embark on a month-long, 15-state tour.  Did the band book that by yourselves, or did you have help?  And if you did it by yourselves, how did you pull that off?

We have booked every single one of our tours ourselves. It’s been tough, but with each tour we get a tiny bit wiser, draw bigger crowds and make a little more money. It’s incredibly rewarding to see the band grow in that way. This is not to say we don’t have plenty of help from the local acts we play with and friends all across the country we’ve made along the way. Without them we’re just a bunch of traveling doucheclowns.

Word of mouth is still really important in turning people on to new music, so I’m going to ask you a question I try to include in every interview: could you name a few bands, whether from Boston or elsewhere, that people might not know about that you’d recommend we check out?

Thanks man.  I’m all over Sexcrement and just getting into Phantom Glue, who sound really good, and now I’ve got some others to check out. So let me close by giving you a chance to let readers know about any other Razormaze news you’d like to get out there.

4 Responses to “RAZORMAZE: AN NCS PREMIERE AND AN INTERVIEW”