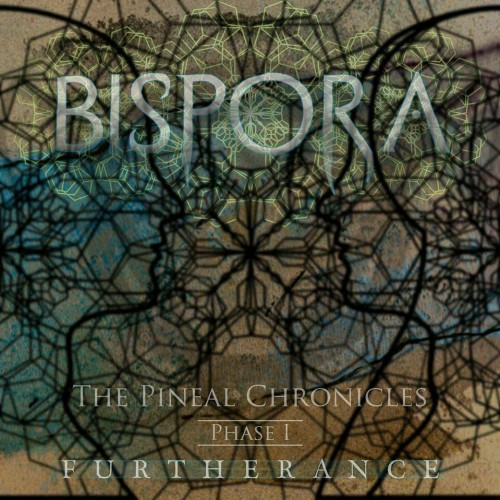 Back in 2011, local Sacramento group Bispora released an EP called The Cycle. For a group that pretty much came out of nowhere, The Cycle was a fantastic twenty minutes of music. It combined a love of prog metal, some djent elements, and a serious bit of Between The Buried and Me influence into something that you couldn’t really find elsewhere. It was a very guitar-centric disc too, with a pretty amazing melody that was intertwined throughout the first and last songs.

With a first release like that, Bispora became a band to watch. While they occasionally played with the same genre tropes as a lot of other bands, they managed to morph them into something all their own, so that they didn’t sound like just generic musician exercises. That’s why they gained the following that they did and why so many folks have been watching and waiting to see how they would follow it with the now-titled The Pineal Chronicles Phase One: Furtherance. (For the sake of my own fingers I’ll probably alternate between Phase One and Furtherance.)

Phase One was released the evening of July 4th and was free for an hour, before the band decided to start selling it for the pittance of $5. So is the first half of a promised two-part release worth the time of day? Have the band managed to pull away from the tractor beam that is the ‘difficult second release’?

Phase One sees Bispora continuing with a similar idea from The Cycle, writing a group of songs and then tying them all together into one big tune. In that sense, things should be familiar to folks who caught up with them since their previous release. However, because Bispora are still a relatively young group, it’s been surprising to see how much they have altered their sound since the release of The Cycle. At times throughout Phase One, the band have actively chosen to go against the grain of what would be expected from them.

They don’t quite venture into Between the Buried and Me circus-noise territory, but they definitely make some clear attempts to avoid being stapled onto one specific genre. They’ve gotten surprisingly percussive now too, so much so that Phase One delivers an entirely different experience, not just a sequel to previous works. If I had one tiny nitpick with 2011’s The Cycle, it was that the transitions into more straightforward death-metal-style playing came a little too suddenly; they arrive more naturally now and feel like the sign of a band who have matured into their own. The group’s aspirations are now rivaled by their songwriting ability; it’s easy to get the feeling that if Bispora want to do something in a song, they’re going to do it and pull it off without it sounding hokey or shoehorned in.

The album begins with “The Expedition”, a song written in part to explain our protagonist’s reason for sailing across the ocean. It’s one of the more familiar songs, but it contains a stuttering guitar melody reminiscent of what Born Of Osiris did in the “Recreate”, and with much the same result. The song demonstrates how much vocalist and guitarist Josh Paniagua has matured into his role; his singing has improved a bunch on this release. On a couple of occasions, he really carries the song and serves as a complement to the rest of the band has they build into a crescendo.

“Where Ocean Meets Land” continues much of what happened in “The Expedition”, but begins to bring in the heavy percussive element that pervades much of the CD, leading into the pleasant surprise that is the segue “Guru”. “Guru” is interesting on multiple levels. One: Because it feels like a drug trip in its own, complete with full-on naked hippie drumming and psuedo-philosophical speech that in this case is Morpheus’ monologue about the Red Pill/Blue Pill in The Matrix (which, by the way, when did The Matrix become the go-to old movie for that sort of stuff? Isn’t there at least more to be mined out of the Carl Sagan archives before we go on making me feel old?). And two: it’s a completely unexpected turn based on what Bispora had been doing. Not only that, but it defines a whole lot more of this disc than I think even the band are aware of. It’s a brave move to include it, and I’m really interested to see how it turns out live.

The back half of The Pineal Chronicles is made up of “Peripheral”, another segue in “The Arcane Hatch” (which is just some ambient noise, more for a full-disc run than something you want to pop up on shuffle), “Eyes From Above”, and “A Surge Of Progress”. If I were to give anyone an award for the back half of this disc it would probably be drummer Greg Chastain, because the music takes a turn for the incredibly heavy and he amplifies it with a bevy of blasts and multiple hammerings throughout each song. “A Surge Of Progress” has at least a couple of minutes dedicated to him just doing multiple bass-drum triplets that the guitars chug over.

“Eyes From Above” is another song that plays into the percussive element of this release. The opening is a rush of noise that contrasts with the relative calm that spread through the whole middle section of this disc. “Eyes From Above” also includes a heck of a guitar melody in the opening and proves to be one of the heaviest songs on the album. The band have made themselves the masters of the constant shift between light and heavy, and now they don’t do it at a simple drop of a hat; each section can breathe to its fullest, and we as listeners get to appreciate each layer of synth, guitar, and bass.

I also thought it was interesting that there are multiple segments throughout where the band is actually led by the bassist, which I think shows an effort to try and have each band member get the spotlight for a little bit. There’s obviously still a ton of synth going on. That was one of the group’s trademarks from The Cycle, and its constant sweeping through “A Surge Of Progress” establishes it again. The group recently recruited an EDM artist named Mixellburk, too, and that brings another aspect to the sound that I’m really curious to see how they will do live.

Bispora are nothing if not ambitious as hell, and that sort of ambition is infectious. The Pineal Chronicles Phase I: Furtherance is another example of a band with an excellent idea and the talent to get it done actually pulling off what they set out to do. It’s exciting to see a smaller group like this innovating on such a level. Bispora aren’t a band who really tie themselves into any one specific genre, so the album brings a sense of discovery that you don’t often find with local bands on each of their releases, and that’s one of the reasons why they are so exciting. They’re a group whose aspirations seem infinitely huge compared to their current resources. Considering that the music they’ve put out so far has been great, you can’t help but want them to succeed.

With The Pineal Chronicles, Bispora have met and exceeded their previous disc by far, as well as setting a new bar for bands who want to hide under the prog label without actually doing anything progressive outside of using guitars with more strings on them. They’ve shown that if you have the songwriting talent it doesn’t matter how small of an audience you may be reaching at the moment, because although The Pineal Chronicles may have been an album largely produced in bedrooms, it feels like one that should be up there with most major-label prog releases.

3 Responses to “BISPORA: “THE PINEAL CHRONICLES PHASE I: FURTHERANCE””