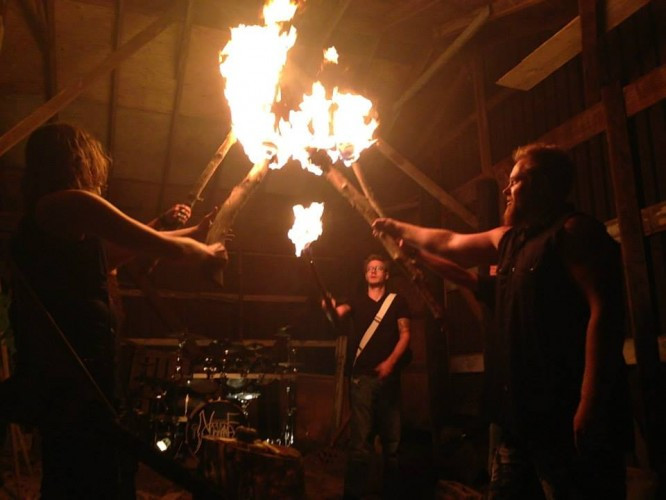 When we got the chance to premiere the new music video from Buffalo, New York’s Theatre Nocturne, we jumped on it. Not only is “Nepenthe and Lavender” a killer song, the video itself is also riveting to watch.

As for the music, it’s flat-out explosive — a jet-fueled rampage of blackened death metal that’s a sure-fire headbang trigger. It lets all of the band’s talented performers strut their stuff, and they’ve definitely got the right stuff: razor-edged riffing and fiery soloing, gut-rumbling bass, munitions-grade drumwork, and feral howls. And you gotta love the spine-jarring bass lead that takes center stage in the song’s mid-section.

But there’s more to the music than a pleasing amount of technical flash and a healthy dose of ravenous brutality. “Nepenthe and Lavender” is also a dynamic, well-written song with a catchy melody, the sort of thing that pulls you back for repeat listens. And the production quality is excellent.

As for the video — filmed and produced by Doug White of Watchmen Recording Studios — it layers a montage of images of the dead over well-filmed, well-edited video of the band thrashing in a fire-lit space. The photos are from another era, solemn portraits of loss, the living and the dead side-by-side. Since “nepenthe” is a medicine for sorrow, a drug of forgetfulness in the ancient Greek, the imagery is fitting.

“Nepenthe and Lavender” appears on Theatre Nocturne’s 2012 debut EP, Anhedonia, which can be ordered on CD or downloaded via Bandcamp. The Bandcamp link is below, and you’ll find a full stream of the EP after the video. Expect a new Theatre Nocturne release near the end of this year.

Now, prepare to be smashed.