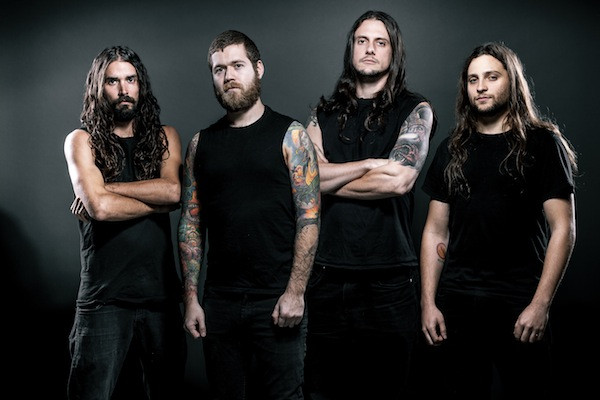 I’m pretty sure I should be in the ER right now for all the bones I just broke moshing and headbanging to this album, but duty calls.  Revocation’s S/T is pretty much the shit.  Maybe more than the shit.  Certainly their best album to date, most brutal, most technical, and just downright fucking nasty, grimy, and vicious in every way possible. Last year’s Teratogenesis EP in no way will have prepped you for this bad boy.  It takes no prisoners, it shows no mercy, I’m still trying to figure out how they managed to make an album this malicious and rabid.

Revocation, along with bands like Vektor and Sylosis, have really proved that one of the few ways (maybe the best way) for thrash metal to achieve legitimacy in the current world is to completely assimilate itself into death metal frameworks with jazz influences and black metal touches. In fact, this may be the new standard. I mean yeah, I heap praise upon bands like Evile and Havok, but I have no problem also saying that, as good as they are, they still pale in comparison to bands like Revocation — because bands like Revocation are paving the way for the future of metal as we will know it.

I know some observers already consider Revocation to be a “death metal” band per se, but I entirely disagree.  The band’s character is definitely more in line with thrash; the music is an organized anarchy, a barrage of Molotov cocktails and riot shields crashing into each other, the sound of civilizations collapsing beneath the frantic violence of life itself.  Nowhere is this more evident than on their new self-titled opus.  This record is chaotic as fuck and holds nothing but warriors’ pride in that fact.

Anyone who cares has already heard the first single off this album, “The Hive”.  If that wasn’t a blistering megaton hammer-blow to the temple, I don’t know what is.  Let’s not forget that after that, the band debuted the song “Invidious”, which has A FUCKING BANJO IN IT.  HOW FUCKING PUNK IS THAT SHIT!? The thrash is faster, the death is brutaller (we’re just gonna roll with that word for now), the black is grimier, the melodic aspects are more epic, this band just continues to get better.  Let’s also not forget David Davidson’s love for the occasional country lick or riff here and there.

I seriously can’t even drive with this shit on.  I go way above the speed limit just on pure instinct.  The adrenaline rush the album delivers is almost unreal, and staying within the speed limit is made even more difficult by dat mix, which is fat and meaty as fuck and beautifully accents the band’s musical elements.

Maybe I should have myself transported to the ER now.  To repeat, the new Revocation album is their best yet.  And that idea should be terrifying to any of you who’ve already injured yourselves in the process of enjoying their previous efforts.  We don’t do scores around here, because scores are stupid.  But this is a 10/10-er for sure.  The album is flawless in its composition and its execution and is a milestone in the band’s evolution.

That distinctive evolution is what has made Revocation so great.  They haven’t grown in conventional or predictable ways; instead, it’s as if they will continue to be forever consumed by what lives within their own heads, to the point that they will achieve an entirely insular consciousness.  There aren’t “influences” or tried-and-true ideas being made into music here anymore; it’s a four-man hive-mind following its own single-minded track.  And while the music is extremely multi-faceted to be sure, it’s nonetheless an exercise in zealotry of an unbelievably efficient and ruthless kind.

Throw money at them until Revocation appears in your mailbox, is all I’m saying.

Revocation will be released by Relapse Records on August 6 in North America. Pre-order here. Listen to “The Hive” and “Invidious” below.