Okay, it’s time to confuse people again (at this site we call things like this “Exceptions to the Rule”, but could just as easily classify them as “Seeds of Confusion”).

Vulture Industries are not strangers to these pages, though 18 months have passed since we last featured their music. They dwell in Bergen, Norway, population 270,000, and home to an astonishingly large number of talented metal bands given the city’s modest size. But it’s safe to say that Vulture Industries are unlike any other band from Bergen. In fact, I’m having some trouble thinking of anyone quite like them anywhere else in the world. Today they debuted (via the Pyro site on Norwegian national radio (NRK P3)) a lyric video for the title track to their forthcoming album The Tower, and it proves my point.

The music is a bombastic, theatrical, head-spinning thing. The excellent instrumental part of the music is sort of like a blend of melodic death metal, post-rock, and Broadway show-stopper, spun in an avant-garde centrifuge, and Bjørnar Erevik Nilsen’s mainly clean vocals will take you into the clouds. He sings, “It Soars!”, and his voice soars like you won’t believe. He also assumes a variety of other vocal personae in this allegorical song about the materialism of modern life in the Western world.

As eccentric and borderline-surreal as the song is, I found myself immediately riveted by it — and I do mean immediately, as in, from the first seconds. And the first thing I wanted to do after hearing it was hear it again. 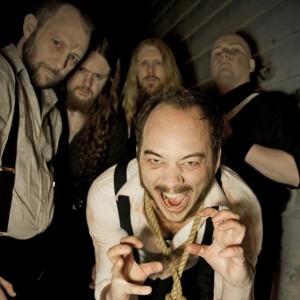 The video is also a visual feast, which features the wonderful artwork of Costin Chioreanu. There is one perhaps unintended bit of humor that comes from the placement of an ad for the album and related merch; you’ll see what I mean. But otherwise, I thought it was quite cool, as lyric videos go.

The Tower was mixed by Herbrand Larsen (ENSLAVED) and mastered by Jens Bogren at Fascination Street Studios. It’s scheduled for release by Season of Mist on October 1 in NorthAm and September 27 everywhere else, and it’s now available for pre-order here.

I’ll shut up now and let you watch and listen to “The Tower”. Comments, as always, are welcome.

8 Responses to “VULTURE INDUSTRIES: “THE TOWER””