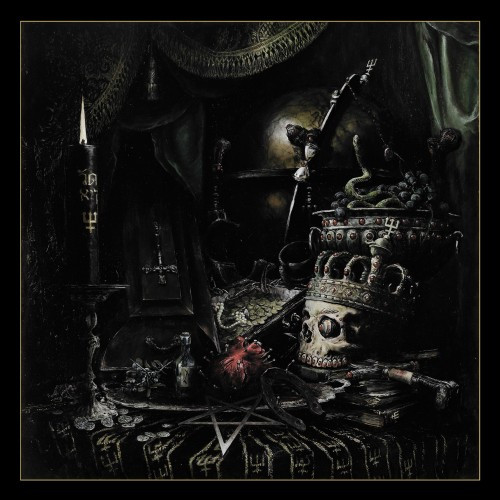 (BadWolf reviews the fifth album by Sweden’s Watain, and their first on the Century Media label. It’s due for release on August 19 in Europe and August 20 in the US.)

With a series of critically-acclaimed albums under their belts, a dead-serious take on satanism, and a notoriously bloody live show, the members of Watain are the current poster children for European black metal. Deathspell Omega may be more artistic, and Alcest may make more palatable music, but neither of those bands land on the cover of Decibel magazine. Under this level of public scrutiny, many metal bands, and black metal bands in particular, stop producing excellent work. At this point, Watain is in the company of Cradle of Filth and Dimmu Borgir, who, like Watain, rode into success on the backs of powerful imagery, strong melodies, and a few good records, though they ultimately fell into the rut of overproduced kitsch.

Judging by Watain’s fifth album, The Wild Hunt, however, these three Swedes won’t make the same mistakes. The Wild Hunt is a confident step outside of Watain’s comfort zone—one that dials down black metal cliches while taking more risks than they have before, and producing several excellent songs in the process. 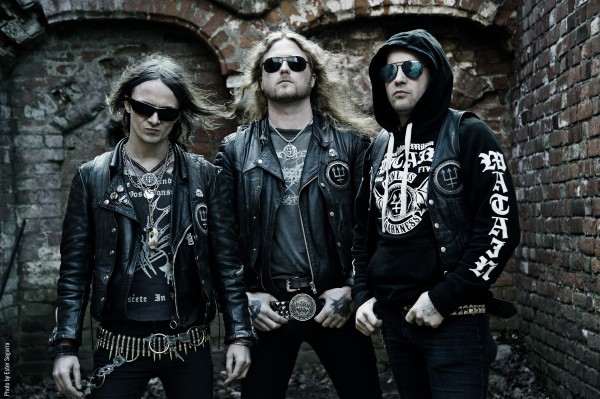 The Wild Hunt comes neatly divided into two halves. In classic hard rock fashion, the album opens with a series of confident crowd-pleasing singles, before diverting into a self-consciously ‘artistic’ and ‘difficult’ second act. The first two songs released from the record, “All That May Bleed” and “The Child Must Die”, come from the first segment, and offer a good look into what to expect: Erik Danielsson’s super-echoed vocals, blackened thrash riffs, and both melodic and chaotic guitar solos. Watain play it just anthemic enough to hold my interest without feeling like they’re kowtowing to Revolver magazine and Sirius XM’s sensibilities.

The album sports a vague classic-thrash feel. The clean guitar intro of “Night Vision” that segues into “De Profundis,” comes across like a slice of Metallica worship. Gang-shouts play counterpoint to Danielsson’s lead vocals on “Black Flames March.” Most of all, the barely-restrained grit of late-80’s Slayer peeks through all these songs.

And then “They Rode On” plays, and suddenly Watain becomes a very different band.

“They Rode On” is a nearly nine-minute folk-inflected ballad, the sort of thing that could easily derail an extreme metal album. In a parallel universe, that song is the precise moment in time when Watain jump the shark.

Against all odds, “They Rode On,” is one of the best songs on the album. Perhaps Watain had more Metallica in them than they cared to display until now, because it’s quite the ballad, the sort of curve ball that Converge threw at the end of 2009’s Axe to Fall, but Watain made it the centerpiece of The Wild Hunt. The highest honor I can give the song is it feels like something Opeth would write, and from that point on the influence of Watain’s fellow Swedes runs thick in the record—it is as if they realized that Opeth would never make a great prog metal album again, and stepped right up to the plate. Danielsson’s clean vocals are not as good as Akerfeldt’s, but they feel human—untouched by obvious studio trickery. It’s endearing; he brings an earnest twang and comes across more meditative than romantic. 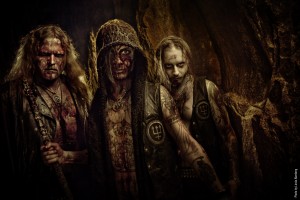 From then on out, all bets are off. The second half of the record displays a myriad of of influences heretofore absent from Watain’s music. The band experiment wildly with style and tone, and succeed in every venture they try their hand at. This second half is much more exciting than the first—actually, it’s the most exciting series of songs Watain have put to tape since Sworn to the Dark. The title track is a mid-paced doom song that strikes a great balance between melody and abrasion, the perfect song to raise a glass and headbang to. The closing track, “Holocaust Dawn,” flirts with clean guitar bridges and chanting atmosphere in the vein of Melechesh, and also nails a  circus-like swing-time passage reminiscent of Sigh. “Outlaw,” sure to be a live staple, comes across as a five-minute love letter to Roots-era Sepultura, complete with tribal chants, a schizophrenic guitar solo, and a two-step skank section—it’s the sort of big mosh song Watain hasn’t ever written, and I imagine it will become a live staple, too.

It goes without saying that the very things that have endeared The Wild Hunt to me are going to crucify it for other people. I have peers, co-writers, and industry contacts who feel Casus Luciferi, a record I found a bit boring, was Watain’s crowning glory, and I cannot imagine them finding the joy in this record that I have. The Wild Hunt deviates too far from the core aesthetics of black metal for a certain crowd of people—remember “Outlaw”? And for that crowd of people there’s a host of excellent, experimental-while-orthodox material out there from bands like Infera Bruo and Woe. At the same time, this is not the sellout betrayal that many other publications are going to paint it as.

And believe me, they will. Danielsson is a consummate careerist, and has never shied away from that fact in interviews. Watain fit easily into the familiar storyline of the underground sensation that flies too close to the populist sun, and has its wings of critical acclaim burned off out of resentment. Remember ,when you’re listening to The Wild Hunt, that the sellout narrative is only a narrative, an outline we use to organize information and nothing more. Reality has no responsibility to conform to what we expect, and there is no objective reason that a financially solid black metal outfit needs to make shitty records

The Wild Hunt is both a movement toward wider acceptability and an experimental record, and it pulls both sides off with aplomb. Is it the solid front-to-back rager that Sworn to the Dark was? No. But it’s going to make many people’s end-of-the-year list. More importantly, it’s thrown me one hell of a curve ball. For that, Watain have earned my applause.

6 Responses to “WATAIN: “THE WILD HUNT””