(In this post Andy Synn reviews the new EP by London’s Sidious.)

That should really be all you need to read. Go buy these UK blackened death metallers’ debut EP right now. You won’t regret it.

For those of you who want a little more information (I’ll call you “Cautious Cathys”) let me describe the Sidious sound to you.

Though the music is built around a visceral core of pure black metal poison, there’s also more than a hint of death metal in its punishing, mechanised rhythms, while the whole unholy package is wrapped in an aura of imperial symphonic melody. Ultimately, Ascension to the Throne ov Self is as majestic as it is misanthropic, as menacing as it is morbid, combining the best elements of both black and death metal with a sense of infernal ambition. 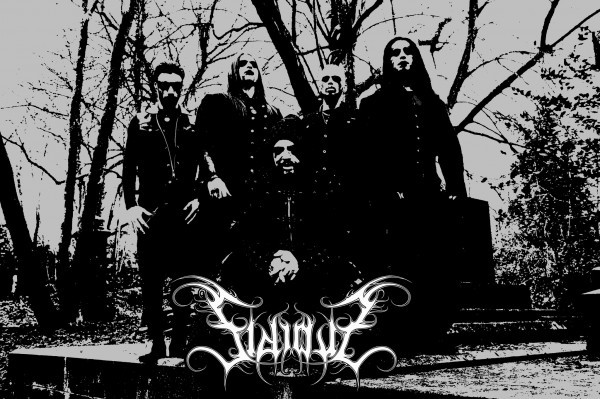 After a creepy, eerie intro, “Insurmountable Mass” unfurls into a veritable monster of death-tinged black metal madness. Overpowering drums and brutal vocals (switching between ravenous growls and tortured shrieks) provide a concrete-heavy backbone, while a writhing torrent of furious, technical riffage cascades over the listener with unrelenting force. Throughout all this, subtle orchestration adds a chilling atmosphere to the track, culminating in a grandiose and godless finale.

The rampaging blast-beats and precision-force riffage that begin “Sentient Race” serve to showcase even more the band’s complex hybridisation of death/black metal power and intensity. The gnarled and twisted riff work that highlights the song’s mid-section is backed by a truly crushing barrage of inhuman drumming that reaches almost Origin/Hour of Penance levels of pneumatic savagery, while the subtle symphonics and synthetic soundscapes weave a cold and ethereal spell throughout the song’s brutally intense four minutes.

“Nihilistic Regeneration” begins with a haunting atmosphere of phantom keys and echoing clean guitars, atop which an ugly sequence of demonic vocals gnash and grind with possessed ferocity. The eventual eruption is absolutely apocalyptic, rippling, murderous tremolo lines and stabbing, stomping riffs thundering away over a relentless assault of devastating drum work. The keys provide a layer of seething menace, peaking during the torturous vacuum of the song’s bleak interlude. The second half of the track interweaves icy melody and brutal, pulverising riffage, twisting and turning with violent biomechanical rhythms, culminating in a perfect storm of grim, blackened devastation.

The EP concludes with the downward-spiralling terror of “Ascension to the Throne ov Self”, whose brutalising riff-hammers hook you in with their neck-snapping, whiplash-inducing contortions. Grandiose keys and razor-wire tremolo runs drag the track deeper into blackened territory, leading into a dark and moody interlude of weeping keys and ghostly clean guitars, before the track collapses into a climactic cataclysm of booming, bombastic death metal and dragging, blackened sludge.

Venomous and visceral, grim and grandiose, Ascension to the Throne ov Self manages the difficult task of matching epic ambition, punishing force, and scalding technical skill in a triumvirate of sheer, unflinching power.

EDITOR’S NOTE: Ascension to the Throne Ov Self is out now via Kaotoxin Records and can be streamed and downloaded via the Kaotoxin link below or pre-ordered as a CD here. The outstanding cover art is by Luciferium War Graphics.

5 Responses to “SIDIOUS: “ASCENSION TO THE THRONE OV SELF””